The Avatar series currently consists of two animated TV shows: Avatar: The Last Airbender and The Legend of Korra. Each series features “benders,” who have special powers tied to an element, such as fire or air. The protagonists of the shows are Avatars, who can master bending all four core elements. They have supportive friends and go on adventures, battling enemies and often saving the world; however, this standard format for children’s animated action shows ultimately proves to be groundbreaking with its gender bending. Avatar: The Last Airbender aired from 2005 to 2008, and won 11 awards along with critical and consumer acclaim. The high quality animation and humor carried on to its sequel, The Legend of Korra, which won 15 shows and garnered similar critical acclaim.

Both shows aired on Nickelodeon, a children’s network with a target audience of children ages 6-11. The exceptions were the last two seasons of The Legend of Korra, which were released via streaming at Nick.com. Television viewing had declined to 1.5 million viewers from the average 3 million per episode, but with a large portion of viewers being outside the target audience for Nickelodeon, the show was more popular online.

“Ending a relationship is like pulling off a blood sucking leech.”
-Mako (a man)

“Nothing [can save our relationship], that is, except marriage. We will wed at sunset. You may express your joy through tears.”
-Eska (a woman), while horror music plays

The show gets subtly more progressive. It makes light of anime style and how it can portray males and females as exact equals aside from adornment, which is necessary for distinction between them: 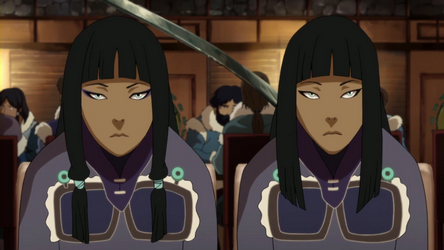 By portraying a set of mixed-gender twins by the same art but with eye shadow and hair ties on the girl, it introduces uncertain gender roles. Although this could be construed as perpetuating the idea that women must beautify themselves artificially, Aubrey Plaza’s deadpan humor as the female in the pair almost creates a parody by proving the twins to be far more similar to each other than to their prescribed gender roles. Season two continues the seemingly heterosexual nature of the show by revamping the love triangle among Korra, Asami, and Mako; Mako goes back and forth a couple of times between the women, causing discontent. Friendship proves stronger than the awkward love triangle, which ends with the season.

It becomes clear by season three that although there are strong male support roles, the leads and true heroes of the show are actually heroines. The most evident is Korra herself, who is a physically strong woman who fights in a team sport and in individual sparring matches to help her gain the stamina and willpower to save the world. Even the ever-submissive female, Julie, is lauded by the man who orders her around because he openly acknowledges that he cannot go anywhere without her. When they are separated, he misses her and her various talents dearly as he strives to do things for himself.

By the last season, we see a man who desires a job in which he would have a female superior, a woman being extraordinarily successful in business, a woman who, although she is the “bad guy” in the season, has essentially managed to take over an entire kingdom, and elderly women with mentoring and Yoda-like roles. Things that we don’t see are unrealistically heavily muscled men, women without useful roles, and damsels in distress, which are frequent in other children’s programming. We do see an entire episode of a woman recalling her heroic journey as a man recalls his romantic past, which is a refreshing gender role switch, and not very subtle. We also see a woman, Julie, standing up to her boss by demanding fair and equal treatment; she is no longer happy doing his bidding without his full respect. She gains this respect, and with it, an engagement ring. The most poignant moment in the entire Legend of Korra show, however, is the last scene:

Mimicking the final scene from Avatar: The Last Airbender, this finale launched The Legend of Korra into cartoon history. In the former show, the Avatar and his romantic interest kiss; however, the other parallels between the scenes allowed the fans to fill in the lapse themselves by creating Korrasami via fanart. Thus this children’s show features two women whose sexuality is fluid, even though it is not blatantly stated, which I believe earns The Legend of Korra a spot in this archive.