Steven Universe is an animated television show currently running on Cartoon Network. The show features Steven Universe, a young boy growing up with the “Crystal Gems”; three alien rebels who protect the earth from the other extraterrestrial Gems. Through missions, battles, and interactions with the Gems and his human friends, this coming-of-age story follows Steven while he discovers his abilities and learns about who he is. This show is groundbreaking in its representation of gender roles and its queer-positive message.

The show was created by Rebecca Sugar and is Cartoon Network’s first show solely created by a woman.

Steven, being half-gem and half-human, is the first and only male Gem. The Crystal Gems whom he lives with are all female and assume a motherly role for Steven. He looks up to and learns from these heroines, a big twist on the normally male-dominated hero role in young boy’s cartoons. It’s through this sort of gender-role shifting that Steven Universe shows boys that it’s okay to look up to women as role models. 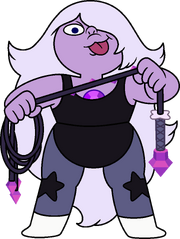 Even though all of the characters that Steven learns from are female, they all embody different elements of femininity and masculinity. In her book “Female Masculinity,” Judith Halberstam sought to identify what constitutes masculinity. In one example in her book, she talks about the James bond classic Goldeneye. Halberstam claims that though she is female, M is the most masculine character in the movie. In Steven Universe, Garnet is perhaps the most masculine of the Gems. She is strong, intelligent and is the new leader of the Crystal Gems. Many of the Gems also appear tomboy-ish, exhibiting more masculine qualities. Amethyst is one such tomboy. She is bad-mannered, loud, messy, and impulsive, lacking most traditionally feminine qualities.

n addition to its strong and diverse female cast, there are not-so-subtle queer overtones in Steven Universe. Their former leader and Steven’s mother Rose Quartz, gave up her physical form to create Steven. The Crystal Gems all looked up to Rose Quartz, and Pearl had a particularly close relationship with her. When reminiscing about Rose Quartz, Pearl is very loving and even calls Rose Quartz “beautiful.”  Emotional connections and relationships of all kinds are major themes in the cartoon. 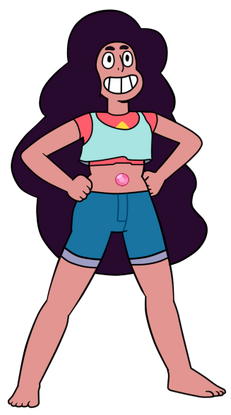 One major power of the Gems is “fusion.” By joining together, two gems are able to create one entirely different entity, sharing features of each individual gem and growing in power. The writers of the show use this ability to explore emotional connections. In one episode Steven accidentally fuses with his female friend and romantic interest Connie. Together, they become the androgynous ‘Stevonnie‘ who is never referred to using gendered pronouns. In this body, Steven has a gender-bending experience where everyone in the city sees Stevonnie as a very beautiful person. This exploration of gender for Steven shows the viewer his more feminine side in a fun way.

While Stevonnie was present only once in a light-hearted episode, the season one finale was perhaps the most serious demonstration of a romantic fusion. It is revealed at the end of season one that Garnet, the current leader of the Crystal Gems, actually exists as a near-permanent fusion of the gems Ruby and Sapphire. These two Gems are deeply in love and decided to stay fused forever a a sign of their strong bond. This perceived homosexual relationship between Ruby and Sapphire is portrayed beautifully in the show. Parallels can be drawn between their fusion and marriage, where two people join to create something that is greater than the sum of its parts. This clip shows the reunion of Ruby and Sapphire after they were captured and forcibly separated. It’s clear that there is a deep emotional connection between these female gems and Steven takes it completely in stride.

Representation in television shows has a great effect on children. Studies show that when kids see people like them portrayed positively in media they are positively impacted. Steven Universe’s queer-positive and heroic female message reaches kids at a critical time in development, when children are still discovering and exploring gender and identity. Because of the cartoon’s unique perspective on feminine role models and queer-positivity I feel that Steven Universe deserves a spot in this digital archive.