Brother to Brother is an independent movie written and directed by Rodney Evans. It premiered at the Sundance Film Festival in 2004 where it won the Special Jury Prize for a dramatic film and later received 8 other nominations and 7 awards in the gay and lesbian film circuit. Rodney Evans, born in 1971, spent six years working on Brother to Brother, starting with the idea of relating his own present-day experiences with to a larger historical perspective. This film is just one of many LGBTQ themed works that Rodney Evans has directed, written and produced. 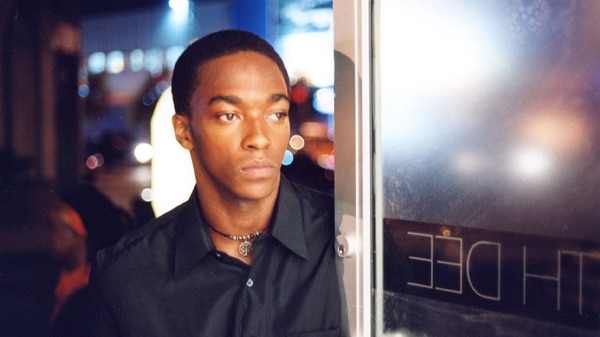 The movie Brother to Brother tells the story of Perry, a college-age gay black man living in New York City. Perry had been kicked out of his home for being gay and feels lost in the world, struggling to find his place in the gay community and black community. He feels alienated from the gay community because he feels that too many white gay men only want him because he is black. He feels outcast from the black community that won’t accept his sexuality.

One day while on the sidewalk, Perry’s friend is reciting some poetry when a man approaches them. This stranger finishes the verse and disappears, leaving Perry and his friend confused. The next day Perry is reading a book of poetry by Bruce Nugent and he recognizes the poem the stranger finished. “Smoke, Lilies and Jade”:

…he blew a cloud of smoke…it was growing dark now…and the smoke no longer had a ladder to climb…but soon the moon would rise and then he would clothe the silver moon in blue smoke garments…truly smoke was like imagination….

It turns out this stranger is a regular at the homeless shelter that Perry works at. After

confronting him, Perry learns that this man is in fact Bruce Nugent, one of the few openly gay writers and painters of the Harlem Renaissance. They quickly become friends, as Bruce sees a lot of himself in Perry. The two frequently visit the house where Bruce lived and wrote during the Harlem Renaissance. The film draws parallels between the struggles Bruce faced in 1920s New York.

Bruce tells Perry all kinds of stories about his younger years as a writer while they explore this house.  Bruce tells Perry about his relationship with Langston Hughes and Wallace Thurman, both very prominent writers in the Harlem Renaissance. With these authors and others, they write a magazine with articles from black writers talking about gays, lesbians, black culture and sex workers. The group got lot of negative criticism from important critics and was attacked by the black community including the NAACP. Bruce also metaphorically walks Perry through a party they threw at the now decrepit house, where they have alcohol in the prohibition era and there are many gay men and women hooking up. Though there are many decades separating Bruce and Perry, they shared similar experiences and Perry learns a lot from Bruce.

Many of the memories that Bruce shares relate to George Chauncey’s Gay New York: Gender, Urban Culture, and the Making of the Gay Male World 1890-1940. We see in Bruce’s younger years the more visible, fairy-type gay man. We also see the way that gays were persecuted in the mid twentieth century. In one scene, Bruce is seduced by a sailor, colloquially known as a ‘trade,’ but it is a trap. Bruce is arrested and brought to court for being gay and is even accused of attempting to rape the sailor.

Through his friendship with Bruce Nugent, Perry learns from Bruce’s experiences of many decades prior, and starts to be more comfortable with himself. Perry moves on from a relationship that wasn’t very good and gets more confident about his place in the gay and black communities. In the end, tragically, Bruce dies of a heart attack. Through telling the stories of Bruce Nugent and Perry, Brother to Brother relates the struggles of modern day gay black men to 1920s Harlem Renaissance era gay black men, showing that the world today can be just as complicated and hostile as it was back then.

Often referred to as the “lesbian version” of Spike Lee’s Jungle Fever (1991), and winner of Best Feature at the Berlin International Film Festival, Cheryl Dunye’s 1996 film The Watermelon Woman is an unusual and revolutionary mock-documentary. Created on a relatively low budget of $300,000, the film is acclaimed as being the first ever feature film by a black lesbian filmmaker. Frequently narrated by Cheryl, who acts as the main character, the film presents her personal life as she embarks on a journey to learn everything she can about a black woman called Fae “The Watermelon Woman” Richards, who starred in Hollywood films in the 1930’s and 1940’s. At the beginning of film, Cheryl talks directly to the camera, and outlines the basis for her documentary project:

“Hi, I’m Cheryl, and I’m a filmmaker. I’m not really a filmmaker, but I have a videotaping business with my friend Tamara, and I work at a video store… so I’m working on being a filmmaker. The problem is, I don’t know what I want to make a film on.  I know it has to be about black women, because our stories have never been told…”

While the film brings forth several overlapping themes, including interracial relationships, racial subjectivity, and identity politics, I would argue that Dunye’s main purpose in creating her film was to both deconstruct and reconstruct images of a historically invisible figure—the black lesbian. Black Feminists in “The Combahee River Collective Statement” declare, “The most general statement of our politics at the present time would be that we are actively committed to struggling against racial, sexual, heterosexual, and class oppression, and see as our particular task the development of integrated analysis and practice based upon the fact that the major systems of oppression are interlocking. The synthesis of these oppressions creates the conditions of our lives.” I would claim that these overlapping oppressions are also what led to the invisibility of the black lesbian figure, both historically and in the present.

Cheryl first brings visibility to the black lesbian simply by acting as the main character in the film. She provides further visibility through the inclusion of her best friend, Tamara, as well as Tamara’s girlfriend. Cheryl’s friendship with Tamara displays varying lesbian identity politics as Tamara often chastises Cheryl for dating a white lesbian, claiming Cheryl is not an “Authentic Black Lesbian” or “True Sister”. In addition to these representations in the film, Cheryl works to create more historic images of the black lesbian through her search to uncover as much as she can about Fae “The Watermelon Woman” Richards. At the conclusion of the film, Cheryl reflects upon what remembering this actress means to her in a monologue:

“It means hope, it means inspiration, it means possibility. It means history. And most important, what I understand, is it means that I am gonna be the one who says, ‘I am a black lesbian filmmaker,’ who’s just beginning, but I’m gonna say a lot more and have a lot more work to do. Anyway… what you’ve all been waiting for—the biography of Fae Richards, Faith Richardson.”

The film ends with Fae’s biography, a compilation of images and short film scenes overlapped with Cheryl’s voice-over. At the end of the biography and during the credits, Dunye explicitly declares the fictional status of the film stating, “Sometimes you have to create your own history. The Watermelon Woman is a fiction.”

Dunye’s creation of a fictional black lesbian from the 1930’s further emphasizes the invisibility of the black lesbian. More discomforting, viewers realize that what she said in her previous monologue was somewhat of an illusion. As Laura Sullivan states in “CHASING FAE: The Watermelon Woman and Black Lesbian Possibility”,  “Dunye had to make up a history of a black lesbian actress; in other words, she had to create her own hope, inspiration and possibility through the creation of a history that was not, but could have been, in some ways should have been, there.”

Through her film, Dunye attempts to (re)write a black lesbian history that was previously non-existent. With the help of New York City based photographer, Zoe Leonard, numerous images of this fictional black lesbian character were created. Made up of 78 images, the collection was later exhibited in galleries, and a book of the images was created as well.