Demi Lovato, popular singer and actress, has continued to stay in the public eye and influence teens for many years now. She got her start as a child on “Barney & Friends.” In 2008 and 2010, she became a Disney Channel star in the hit movies “Camp Rock” and “Camp Rock 2” with the Jonas Brothers. In 2009, she was given her own Disney show, “Sonny with a Chance.”

During 2010, her music and acting career took a hiatus due to mental health issues. She openly discussed  her issues with anorexia, bulimia, self-harm, and bipolar disorder. In early 2011, she entered a rehab facility for three months to undergo treatment for these issues.

Three months after her release from the treatment center, she told People magazine, “What’s important for me now is to help others.”

After overcoming her struggle with mental health, her music took a meaningful turn. With every song that she released, she encouraged self-confidence, acceptance, and strength. Her third album, “Unbroken,” addressed a lot of her personal mental health issues. The album’s emotional and powerful lead single, “Skyscraper,” was Lovato’s first top ten single.

In the midst of trying to destroy the negative mental health stigma in society, she also became an advocate for the LGBTQ community. On numerous occasions, she publicly spoke about supporting same-sex marriage.

Check out this video:

In 2014, she served as the Grand Marshal for LA Pride Week, where she filmed her music video for her single, “Really Don’t Care.” 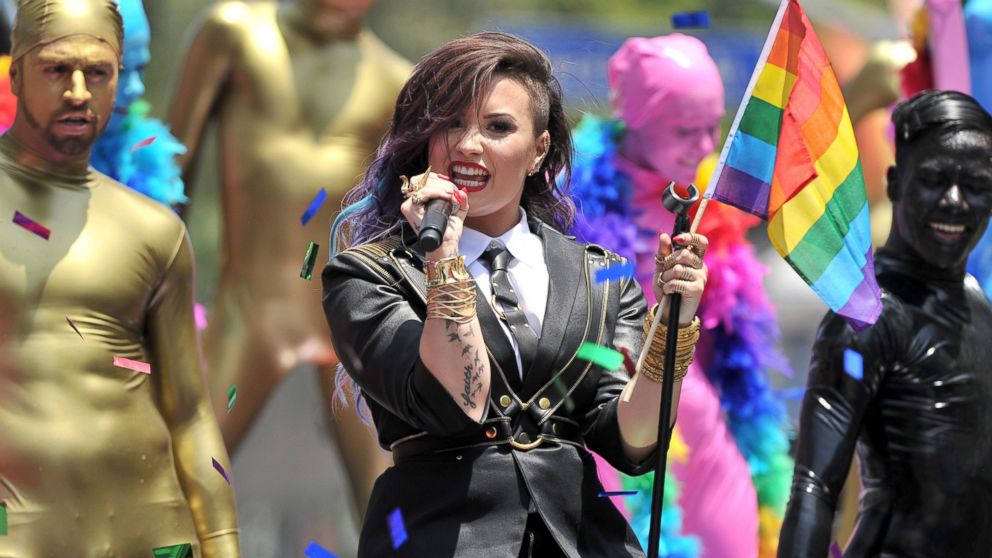 Her newest album, “Confident,” was just recently released on October 16th. Similar to her other music after her recovery, it embodies self-confidence and acceptance. Billboard.com comments on the album: “Since her emancipation from the Disney Channel’s clutches, Demi Lovato has become one of pop’s leading motivational figures, wailing songs about self-empowerment and talking to Congress about destigmatizing mental illness.”

However, the release of the album’s first single, “Cool for the Summer,” received some backlash from critics and fans. The song doesn’t embody the same attitude of all her other music, which is being yourself and being proud of who you are

I am a fan of the song, and I really liked it when I first heard it on the radio this summer. At a first listen, I didn’t realize this song is actually about a lesbian relationship since it does not use any pronouns whatsoever.

Listening closely to the lyrics, however, it became very clear: “I’m a little curious, too,” “Got a taste for the cherry, I just need to take a bite,” and “Don’t be scared, ’cause I’m your body type.”

A song like this from Demi Lovato, a powerful advocate for the LGBTQ community, is not unexpected. However, overall message of the song threw me off, and I was not the only one.

The song is about a lesbian relationship, but it suggests that the relationship is not approved by society, and that it needs to be kept a secret.

She sings, “Shhh…Don’t tell your mother,” “We’re cool for the summer,” and “Just something that we wanna try.”

Overall, the song depicts a secretive, experimental lesbian relationship that isn’t very serious, and that it’s just “cool for the summer.”

Afterellen.com comments, “Certainly there are women whose interests align with “Cool For the Summer,” but when pop stars create hits about bisexuality being less serious or, you know, cool but just “for the summer,” it implies female/female relationships should be (or are) not on the same level of sincerity that a female/male romance might be.”

Being an ally of the LGBTQ community, Lovato would most likely disagree with this statement; however, the lyrics to her song suggest differently.

The issue with this song can be easily connected to a reading we recently did in class by George Chauncey, “Gay New York: Gender, Urban Culture, and the Making of the Gay Male World 1980-1940.” Chauncey introduces the myths of isolation, invisibility, and internalization. The myths of invisibility and internalization can be recognized in the lyrics of “Cool for the Summer.”

Chauncey states, “The myth of invisibility holds that, even if a gay world existed, it was kept invisible and thus remained difficult for isolated gay men to find” (3).

He also states, “The myth of internalization holds that gay men uncritically internalized the dominant culture’s view of them as sick, perverted, and immoral, and that their self-hatred led them to accept the policing of their lives rather than resist it” (Chauncey 4).

In the song, Lovato tells her female partner to keep the relationship quiet, especially from her mother. She fears that society will disapprove, so the relationship is kept invisible. She internalizes the fact that they will be judged negatively for participating in homosexual behavior.

Overall, this song does not align with what Demi Lovato claims to support. It sheds a negative light on lesbian relationships, and it supports hiding who you really are in fear of being criticized by society.