Imagine a world where there is nothing but dancing, drugs, and dopamine. A world where you can snap your fingers and the most glamorous, exciting night is right in front of you. Parties, elaborate costumes, music; what can go wrong?  In the film “Party Monster” directed by Fenton Bailey and Randy Barbato, Macaulay Culkin plays Michael Alig, a club promoter and leading member of the Club Kids of New York City, which hosted this glamorous lifestyle in the late 80’s and early 90’s that seemed to rise at the snap of Alig’s fingers. This euphoric and fabulous life was all Michael wanted, so he pursued his dreams and moved to the city to later establish the Club Kids, where he hosted parties and people came dressed in outrageous costumes. Mostly flamboyant and drag-like personas emerged. The Club Kids grew and grew until they were hugely prominent in the underground club scene. Alig learns to rules of fabulousness from James St. James (Seth Green), and he takes flight from there. “Party Monster” does a fine job in depicting Michael Alig and the Club Kids, and I believe it is a spectacle of queer culture that is important to take a look at. The darkness that was behind Michael Alig is something very important to understand “Party Monster” gives us a very accurate presentation of drugs that drove Alig to madness. Being an addict, Alig could never get enough. In almost every scene of the film, we see him high or using. It’s crucial to learn the role of drugs in this underground club life that Alig was basically constructing for himself. Some may argue the lifestyle wouldn’t even be sustained without them. Much of the plot is driven by his drug use, such as his overdose, being warned about them; his relationships are even sustained by them in certain ways. The phrase “dinner is served” is used multiple times throughout the film referring to the drugs he’s prepared for a large group or even an intimate night with James. Almost every action Michael performs in this film is under the influence of hard drugs such as heroine, ketamine, or methamphetamine. Murder is also a theme in this film. Part of Alig’s darkness is his real tendency to kill. He brutally murders his lover, Angel (while high) and dismembers his body. He stuffs his legs in a garbage bag and puts the rest of the remains in a box. Eventually he confesses and was sent to prison for manslaughter. This murder resulted from a long argument about drugs. He was so high he barely remembered his actions. The culture and goal of this film, in my opinion, is not to just tell a story of Michael Alig and the Club Kids, but to really show darkness and pain that is behind the glitz and glamour of what often is, queer culture and practice (but not all). The culture of queer club scenes, underground drag, and practice cult-like groups, etc. There is a strong parallel between this film and “Pink Flamingos”. There are lines that both can connect to such as brutality and darkness, yet glamour and some sort of “perfect world”. Alig believed his club promoting and Club Kids was his perfect world, just like Divine did with her group. When actually, the reality of what they were engaging in was nothing but destructive. Like we discussed with “Shortbus”, and the actual existence of these kind of places, there is a certain set of “rules” and “norms” that govern these kinds of places always led by this great and fabulous leader. Justin Vivian Bond, Michael Alig, and Divine are all faces of their own “clubs” who really act as the eyes, ears, and especially mouths of these environments. “Party Monster” is a really important addition to queer film, in my opinion, and the true story of Michael Alig is something to take notice of when learning the history and culture of the queer club scene. 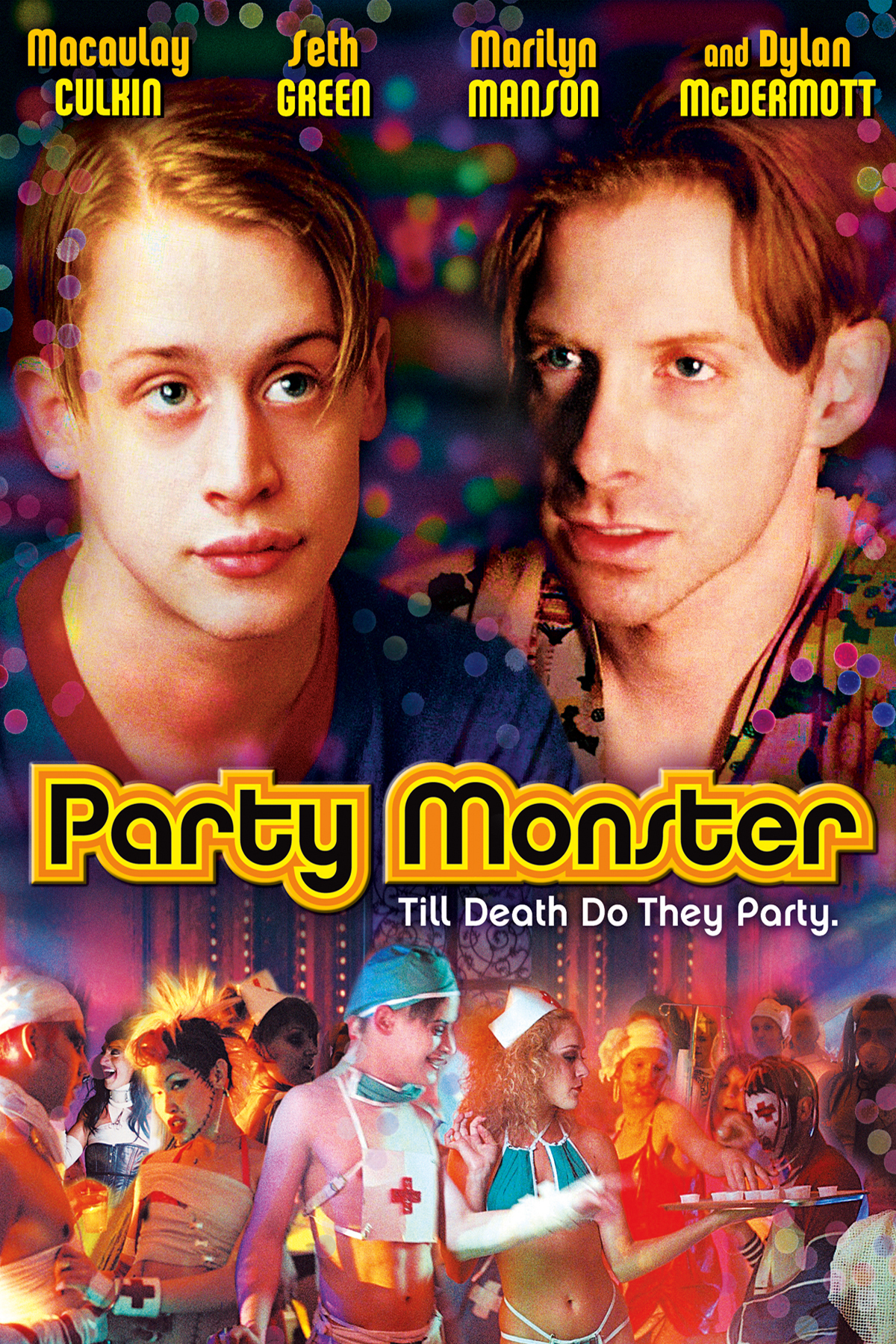 A Home At The End Of The World is a movie that was released in 2004 and directed by Michael Mayer. Pulitzer Prize-winning Michael Cunningham wrote the screenplay as well as the novel that the film was based off of in 1990. The film was shot in New York City, Toronto, Phoenix and Schomberg and its premiere was at the New York Lesbian and Gay Film Festival.

Cunningham is a gay novelist and lecturer who wrote about what it was like to be a child in the 60’s and 70’s as well as an adult in the 80’s. The movie spans about 12 years and follows the lives of two best friends­— Bobby Morrow and Jonathon Glover. Bobby has been through many hardships in his life. He loses both his parents and his older brother and turns to Jonathon and Jonathon’s family for comfort and friendship.

Jonathon and Bobby develop a sexual and emotional relationship in their youth. They’re reunited in young adulthood when Bobby needs a place to stay. Jonathon lives with a colorful bohemian named Clare whom he is very in love with. However, Jonathon ends up falling for Bobby, his first and eternal love, all over again. The three roommates end up developing a three-way relationship and having a child together. Clare eventually moves away with baby Rebecca and leaves Bobby and Jonathon to themselves. Bobby cares for Jonathon in his last days while he dies prematurely of AIDS.

I chose to include this film in our digital archive because it shows what it was like to be homosexual as a child and having parents that aren’t necessarily accepting. I feel that this is relevant to our class because most of us are still young enough that our parents have some sort of dictation over our lives, and coming out might cause significant problems in our relationships.

This film represents a different type of queer culture. The beginning took place in the 60’s and 70’s when people were a lot less accepting over homosexuality than they are today. While Jonathon’s mother wasn’t necessarily unaccepting when she caught Jonathon and Bobby together, she was definitely less than happy. This speaks volumes coming from a mother who does drugs with her son; she’s clearly very open but still was uneasy about her child’s homosexuality.

To quote The Straight Mind by Monique Wittig, “These discourses of heterosexuality oppress us in the sense that they prevent us from speaking unless we speak in their terms. Everything which puts them into question is at once disregarded as elementary.” This really sums up how I think Jonathon’s mother acted. She sees heterosexuality as the norm and is confused that her son is straying from it.

Gender was represented in this film through Carlton. His part in the film was brief, but he broke away from gender norms. He wore feminine clothing, had long hair and talked about how beautiful the world was. Sex is represented in this film through Bobby and Jonathon exploring their sexuality together when they were young. Jonathon is beginning to come out as homosexual, but it seems as though Bobby is just open to everything. Even when they’re adults and Clare says in regards to Bobby, “The good ones are always gay,” Jonathon insists that Bobby isn’t gay.

This film clearly represents history well since the time period is set between 35 and 55 years ago. As I previously mentioned, it demonstrates how much harder it could be to be a homosexual person during a time period where things weren’t so acceptable. As far as the contemporary goes, some things really never change. Parents are still often upset about finding out that their child is gay. People still struggle to define their sexuality like Bobby. And people still go through tragedies and hardships, lean on their friends and come out better for it.

What if straight were gay and gay were straight? The short film Love is All You Need? directed by K. Rocco Shields makes us think: what if? One might stop and wonder all the possibilities and frantically press play to get the answers to such a question, but this parallel universe may not be as complicated as we thought. In the film we follow a young girl growing up in a society where homosexuality is the norm. She is made fun of, ridiculed, and bullied to the point of suicide. Boys dance and do theater, while girls play sports and be tough. Her two moms even sustain the stereotypical “masculine and feminine” roles. One works and wants her daughter to play football, the other stays home and is more “emotional”. While this film is powerful in terms of emotional content, the film is not really telling us anything we don’t know. Stereotypical behavior is still present. The film just swaps the bodies playing the roles of society. It would look a lot different if one of the theorists we studied, like Judith Butler, was sitting in the director’s chair.

The switch is cut and dry in this film. The world basically looks the same as it does in real life, only gender is swapped. But is gender really swapped? Gender roles play a significant part in this film and by the looks of the script, they don’t really change as we might expect from an alternate world. If Butler were the writer, the gender presentation of this script would not look so familiar to us. Butler tells us that gender is performative. It is a regulatory regime created by the effect of discourse norms. Butler talks about gender as a repetitive performance which gives it authority. With this idea in mind, Butler directorial vision would look pretty different. These gender performances we see in the film would not hold up in this parallel world. The discourse in the film is completely changed in regards to whom it is being directed, therefore according to Butler, stereotypical gender performance would not have authority. Women would not necessarily still look feminine. They would be performing the discourse in which was directed to them, and the same for men: men are soft and women are hard, according to the film. Butler would make sure gender performance was done “correctly” based on the discourse, the script, of the film. Women would not still be presenting feminine nor men, masculine. Women in the film might wear suits and ties while men would wear dresses and heels; the classic gender performance in which the script is giving us. This would make the film a lot more realistic and it just shows how impactful gender performance is.

While the film, in my opinion, achieved great success in appealing to the audience’s emotions, it did not really show anything unfamiliar to us. Gender stereotypes and a very clear binary was still present. Thinking about Butler as the director/writer instead, offers us a completely different outlook and probably much more realistic look into what this kind of world would look like.