Saints Sergius and Bacchus, as depicted by the painting by Rick Herold, were third-century Roman soldiers. The pair were Christian martyrs with Bacchus dying during torture and Sergius eventually beheaded in Syria for refusing to attend a Greek sacrifice. What’s more interesting is that in early Greek manuscripts, it was revealed that these two were openly gay. After their homicide, the two were given sainthood and several churches were built in their honor, including Constantinople and Rome.

Rick Herold’s painting of enamel on Plexiglas was made in the late 19th century. It shows the two saints in a nude embrace while asleep. The viewer is lead to believe that the men do not share the same ethnic background because of varying hair colors and skin tones. What’s interesting is that the painting depicts more of a post-sex exhaustion with Bacchus with his head on Sergius’ chest. The idea is further supported by Herold’s inclination towards painting homoerotica. 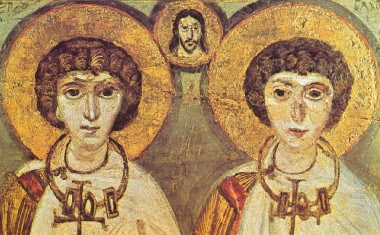 The original piece (as show above) that influenced Herold’s creation is much tamer in nature. It shows the two saints next together with Jesus linking the two as if to show matrimony. The original painting opens up the idea of homosexuality being accepted in Christianity during the third and fourth centuries.

The image by Herold challenges the normative idea of religion being against homosexuality. And it shows a regression of the general public accepting homosexuality because these two openly gay men were given the highest honor a person could receive in Christianity. They were given sainthood. Today, homosexuals are still being put down and thrown under the rug. Homosexuals are still being put in the “other” category between humans and animals but in second and third century Rome, these saints were high ranking soldiers in the army. They didn’t hide their homosexuality and actually the reason they lost favor in the army was because they were found out to be Christians.

Since then, Christianity has been known to be unsupported of homosexuals. Today we have LGBT-friendly Christian groups but by definition, gays are still put in a separate category. Even in those accepting groups there are the LGBT and the people accepting them. And in comparison, Christianity has shown regression on accepting the LGBT community even though there are a number of saints that were known to be homosexual.

The painting challenges queer normative culture. In comparing how Christians accepted gays hundreds of years ago and how homosexuals are treated now, whether it be rejection and subjugation or the weak acceptance into LGBT-friendly communities, the level of regression is palpable. The painting almost says, “these advances are not enough.” And what the people in the queer community are doing, while it may seem like significant advancements, is just making up for what used to be, and even then it fails. These gay saints weren’t the other; they were revered, loved and seen as powerful figures. Today, we still haven’t even gotten over “othering.”

Martha Shelley (1992) in her article, “Gay is Good,” said, “the worst part of being homosexual is having to keep it a secret” (p. 32). By putting homosexuals in a different category, we dehumanize them. In contrast, there is ample art supporting the homosexuality culture in ancient Greece and Rome. Gay men having sex was shown on pottery and paintings. And today, we refuse to accept art forms that support homosexuals. Anything with gay sex is distasteful porn. It took over 1500 years after ancient Rome for homosexuals to be featured in lesser art exhibitions and even today there are no large-scale art publications that feature homosexuals. Homosexuals as told by Shelley are still kept in the dark.

The “Warren Cup” depicting one man penetrating another.

Herold’s painting bridges a gap between Ancient Roman liberalism, Christianity’s change over centuries, and the current negative perspectives against gays. It shows two gay saints in a sexual embrace, challenging stiff religious beliefs that have moved communities against gays. And it dares to ask it’s viewers to reconsider what it means to be an oppressor of gays, because long ago, in what we consider a less civilized time, they were accepted.