Tides are complicated and hard.  When a planet orbits a star, the star raises a bulge on the planet’s surface.  As the planet rotates, this bulge moves across the surface, and because rocks and oceans and atmospheres are viscous this dissipates energy.  The energy comes out of the planet’s rotation, which spins it down.  This is likely why Venus and Mercury rotate so slowly. The planet can also raise tides on the star (as can a moon on its planet), and that tidal bulge gets carried around by the central object’s rotation.  This spins down the central object, and can make the planet (or moon) move inward or outward in its orbit.

Finally, if the planet is in an eccentric orbit, then the magnitude of the tides change.  This dissipates energy, which ultimately comes from the planet’s orbit. This makes the planet slowly circularize its orbit.

Put it all together, and this is why the moon is synchronously rotating around the Earth, moving in a (nearly) circular orbit, slowly moving away from the Earth, and why the Earth’s rotation is slowly slowing down.

Things can get really complicated if you have lots of moons.  The moons of Saturn and Jupiter tug on each other gravitationally, exciting eccentricities that drive tides and keep the bodies warm inside, leading to liquid oceans and volcanism despite the very cold temperatures they would have if they were only heated by sunlight.  Solving all of the resonances and tidal effects in these systems is still an active area of research.

TRAPPIST-1 is a system of at seven close-in planets tightly packed in orbital resonances, much like the moons of Jupiter.  In fact, they have more in common in terms of scale with the Galilean satellites than the Solar System planets: 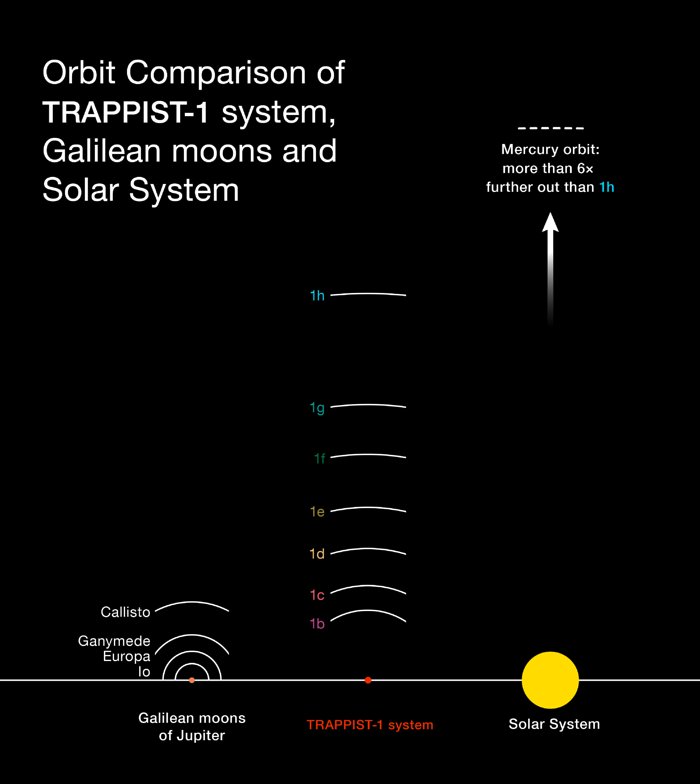 I think that the TRAPPIST-1 system is exhibiting yet another effect that we haven’t seen before: planet-planet tides. The planets in this system are very tightly packed, and quite massive (much more than the Solar System moons are).  It’s likely that eccentricity tides have made their orbits circular (they have very low eccentricity) and that they are synchronously rotating (always keeping the same face towards the star, or else stuck in a spin-orbit resonance of some kind, like Mercury is).

But if that’s true, then when neighboring planets lap each other, the strain caused by their mutual tides are actually of similar magnitude to the strain caused by the eccentricity tides with the star. In fact, if our estimates of the planet masses and eccentricities are right (they’re pretty uncertain, so this is not necessarily a safe assumption) then planet f causes significant tides on planet g that are actually more important than the very small variations in that planet’s tides raised by the star.

This isn’t the case for any moons I know of in the Solar System: although they are more tightly packed than the TRAPPIST-1 system, the Galilean satellites are so much less massive that their tides just can’t compete with that of Jupiter.  The mass ratio for the TRAPPIST-1 system is much more favorable, so the tides may matter.

After doing some rough reality checks with Eric Ford and Andrew Shannon, I fired up the old RNAAS template at Overleaf and shot another Research Note on the topic off.  You can find it here.

I hope this is right!  This is way outside my training so I’m worried I missed something obvious…