A version of thirtieth poem in Cape Cod Light, America’s Edge: Herring Cove, first appeared in Squid with the date December, 1993 (I note the changes to the Cape Cod Light version, below).

America’s Edge is the longest poem in the book, and the most ambitious. Michael’s erudition is in full force here, connecting the full historical arc of Homo sapiens to the ancient cycles of life in the natural world; the fall of empire to the indignities of childhood discipline.

Michael was always a student, of history, of politics, of America’s place in the the world. In college his team won the College Bowl; when I knew him he was a bottomless font of facts. He delighted in the book 1,000 Years,1,000 People: Ranking the Men and Women Who Shaped the Millennium because it let him riff on the author’s choices, quibble over who deserved to be there, speculate on who would remain on the list if you expanded it back another 1,000 years. He loved to champion unjustly-forgotten historical figures, and outré ideas like the historical basis of Pope Joan or the ancient provenance of Kennewick Man and the Ainu. Michael and the rest of the winning College Bowl team from Swarthmore. Their captain was Nancy Bekavac, who would go on to be the sixth president of Scripps College.

The action in the poem moves around, from the shores of the cove to the deck of the house, from night to morning. Michael added the subtitle Herring Cove to the poem after it appeared in Squid, emphasizing the way the poem is grounded in Provincetown. From the edge of the continent Michael looks out across the ocean, to Europe’s past.

Michael is probably using the phrase beautiful conqueror generically, but knowing him he probably had Alexander the Great in mind. Michael loved the story of Alexander, and it suited him: the brilliant, beautiful, gay, doomed and fierce general and emperor, who conquered half of Eurasia, defied convention, burned brighter than anyone before him, and died young.

Last night, the full moon insisted on breaking through.
It spackled the bay like jungle animal
Yearning to turn teeth on its hosts in a sea of blood;
Behind it, the slow blizzard of falling stars.

The predictable glory of a mid-summer sunrise
Rouses us from a bad dream, and the television under your hand
Crackles into anthems and Rothko paintings.
From the deck we watch the birds, and subtler animals slung to the ground,
More acute in their indifference to forging beauty,
Shake, find the first meal, and steel themselves;
They remember the safe spots.

Gradually, the insides and outsides blend
Into a language invented for today.
Scores replicate
In patterns of dried moss scriven on beech limbs.

Morning thunder
Means the life or death of tropical weather
As recent cuttings ripple across the asphalt and into the sand.
The whole world can sing;
Watch the choke cherries throw down their hair in shades of green and yellow,
Becoming, against their wills, the stalks of another summer.

When the old words change their meanings,
We adjust, in the face of grandmothers and grammarians.
Even the ancient capitals submitted
To the syllables of a beautiful conqueror, more arbitrary
Than the barriers thrown down by rivers, oceans, deserts, or mountains.
Membranes strain around every sound:
“I, too, have come further than expected”
Like the markings of Napoleon’s soldiers in Egypt,
“I’ve crossed into a new province, and forced
Guidelines down from the sky.” These dot
Our memories like heroic statues or megaliths.

Places are made sacred by work:
The work that builds a relationship or rears a home out of the dirt,
The work of a prophet against disease, or a king who secures new borders.
These are all written down into verses or laws, and result in trials,
Just as Neanderthals brooded over the end of the Ice Age,
Regretting what they had taught us, and worrying about their children,
But proud in their dying that they had never succumbed to words.

Insects in amber, reconstituted skeletons
Explain how to live in the present. They say:
Walk back into that argument with your loved one,
Muscles rigid with the knowledge that you were right,
Try the whole truth; eventually anyway,
It will erupt out of the flesh.

We were supposed to forget
Dislocations, reprimands, unapproved influences;
Only then could we turn them into anger and use them.
So too the misguided affections of adolescence:

Some of the music, all of the friends,
A late dawn, even the horror movies
When the child walked out and sat trembling on the steps, believing.
We did forget, for a generation,
Until our lives became as boring as suburban lawns.

Children are right
In their urgency to get on to the next thing
Like generous puppies with their noses to the ground
Or eunuchs helping the monarch to appreciate a new toy.
Left to itself,
The living fabric will try everything.

The more willing, the more willing to believe,
A mammal, twitching on the edge of the road,
Sticking to its ideology till it dies.
In the end, the corpse cracks, and forms tiny splinters, like dust.
It’s the need to restore things to how they were.

This is the time to inhabit the village,
As if watching it made all the same world.

At the ocean, Permian remnants
Swirl around the feet of the children
Like an alphabet scrawled on the tideline.
Plenty or lack gets recorded in the ancient language.
Every interpreter has its own reading
Of how neutral the ocean can be
In its retreats and assaults,
How brutally alive the slipping of the fierce lines. The version in Cape Cod Light differs from the version in Squid, with many additions and some line break changes. I have corrected the lowercase i that begins the fourth line in the second to last stanza; other than than I have deferred to the Cape Cod Light version. 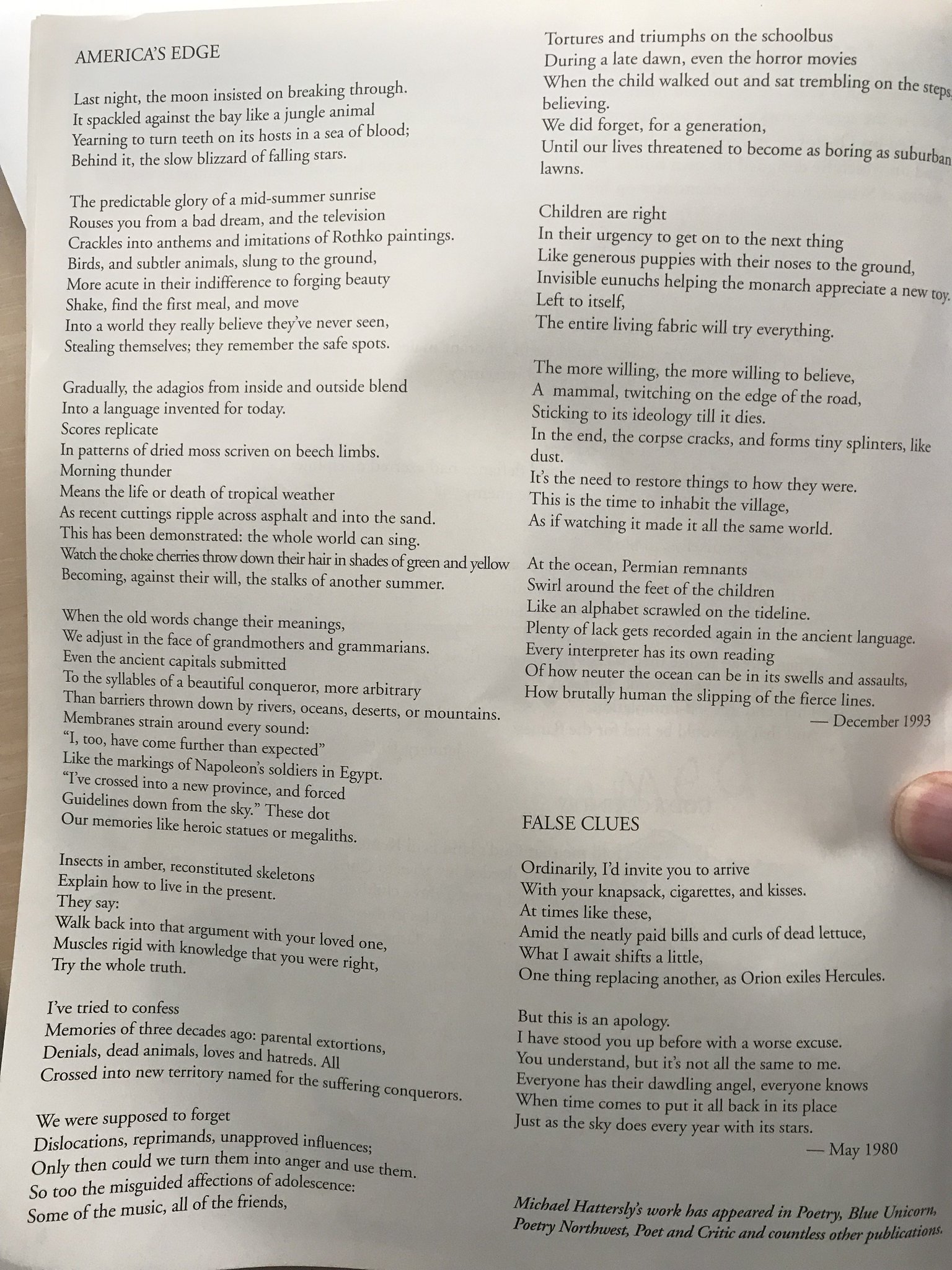