Dave Amato was a biostatistician who led the design and analysis of clinical trials for several important therapies, including AZT to treat AIDS, Lunesta to treat insomnia, and Trikafta to treat cystic fibrosis. He was also a son, a husband, a father, and a beloved family member to many.  Dave died of brain cancer peacefully and painlessly Wednesday, September 23 at 12:30pm surrounded by his family. He was 66.

He was my stepfather. 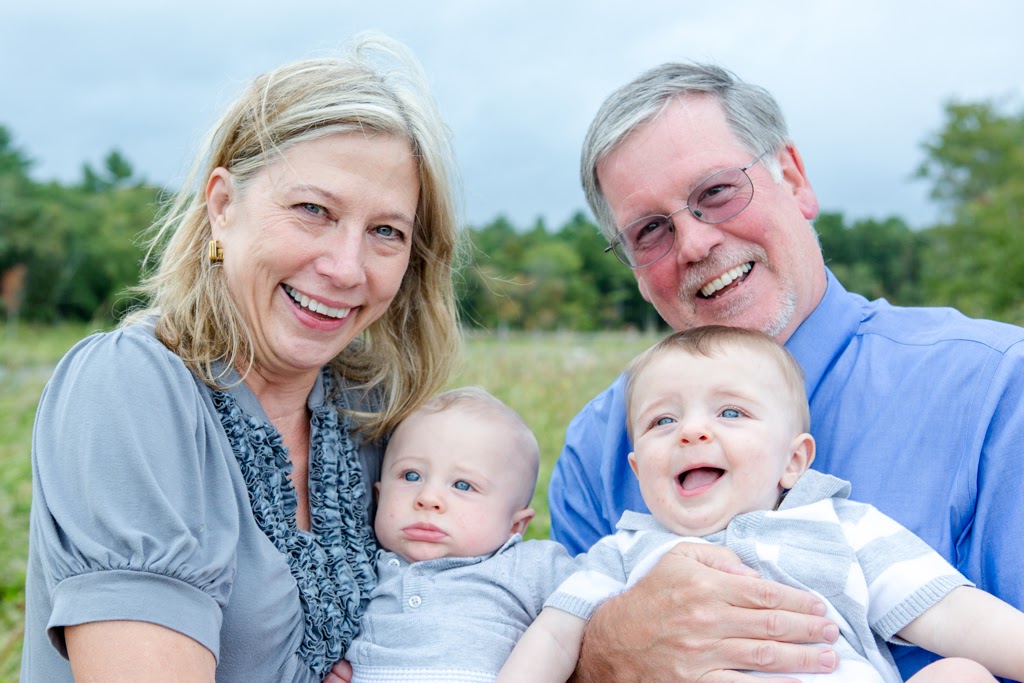 Dave and Victoria with their grandchildren, E and S.

Dave was born on August 14, 1954 and lived in Hamden, CT. He grew up on a farm on the lower floor of a two-story house. Dave’s mother was of full Irish descent and his father full Italian, and he grew up in a tight-knit, extended family with his siblings Don and Linda, his parents Barbara and Lou, and his paternal grandparents upstairs. Dave had 26 cousins. Lou would die young, at almost the same age as Dave, but wonderful Barbara is still a regular and story-filled presence at family gatherings.

Lou was very handy with a hammer and saw, a trait he passed on to Dave. When the farm was claimed by eminent domain when Dave was 13, the family moved into a house his father built nearby. In his senior year of high school the family finished a vacation cottage in Moodus, CT where the family spent summer weekends. The cottage was still in the family until recently, and I have many of the same youthful memories as Dave does at that house: spending summer weekends on the lake, swinging in the hammock, and playing “all-terrain” bocce in the yard.

Dave attended Colgate University, where he majored in mathematics, was a member of Sigma Chi, and where he met many lifelong friends. He graduated in 1976 with Phi Beta Kappa honors. There Dave met Beth Collea (class of 1978) and they were married in Hamilton, NY in 1978. Together, Dave and Beth had three wonderful children, Dan, Karen, and Debbie. Dan is a computer programmer in Iowa from whom I have been the beneficiary of many video games he has helped program (I and my children are particularly grateful for the Rock Band ports to the Wii). Karen is an artist that lives in Maine; regulars to the blog and my office will recognize Karen’s artwork. Debo lives in Cambridge and works in development for the Boston Children’s Museum.

In 1982 Dave earned his PhD in operations research from Cornell University, where he developed new methods for conducting clinical trials for cancers. Clinical trials for fatal diseases are tricky because the subjects often or, sometimes, nearly always die during the trial, so you have to measure survival time, not whether the therapy made them better. In clinical trials you also often have patients whose outcomes you can’t learn because they leave the trial or for some other reason, which results in “censored” data (in the physical sciences we usually just call these “upper” or “lower limits”). The branch of statistics that deals with these issues is called “survival analysis” for this reason, and its techniques are now common throughout the sciences, including in astronomy.

Shortly out of graduate school, Dave worked as a study statistician on clinical trials for treatments of carcinomas, melanomas, mesotheliomas, and sarcomas. In his first job at the Dana-Farber Cancer Institute, he worked on chemotherapy and radiation therapies for bladder cancer and untreatable lung cancer. In a strange twist of fate, his work there included studies of gliomas in the neurooncology department, where I would join him decades later for an appointment to hear the biopsy results on his own glioma.

Dave worked for five years as an assistant professor at the Harvard School of Public Health, and another two as an associate research scientist at the University of Michigan.

In 1989 Dave rejoined the Harvard School of Public Health as the Head of Biostatistics at the Statistical and Data Analysis Center (SDAC). This was a particularly formative time in his life, where he met many lifelong friends and, eventually, his second wife, Victoria Hattersley, my mother. I was around 14 at the time.

We had just moved to Boston several weeks earlier, and moved in with my uncles Michael and David.  Around the time we arrived, David was diagnosed with HIV, and mom wanted to help. So she took a job at SDAC despite being badly overqualified for it, because she wanted to contribute to the important work being done there developing therapies for HIV.

Dave was particularly proud of the work he did at SDAC, where he was lead statistician on multiple HIV therapies, including AZT. At the time, HIV was a death sentence, and there were no effective therapies. AZT was ultimately approved on the basis of another trial, but SDAC was an important part of the worldwide effort to find a cure. Today, the disease is mostly manageable with medications thanks to those efforts, although they were too late for David.

In 1994 Dave left academia for industry, including working as executive director of biostatistics at Sepracor, where he led the statistical analysis for the sleep drug Lunesta. He told me that the Lunesta trial was the best trial he ever analyzed: they hit every endpoint easily and early, becoming the first (and still only) sleep drug approved for long-term treatment of insomnia by the FDA. He and my mother, both of whom suffer from insomnia, used it loyally ever since. Dave told me he encouraged leadership at Sepracor to run a head-to-head trial against Ambien because he was sure it would prove superior and knock it out of the market, but they seemed satisfied having the “long-term” advantage and never risked such a trial.

Dave climbed the corporate ladder, working for several other companies throughout his career. He was senior director of biometrics at Shire HGT, where he worked on FDA approval for Firazyr, which treats hereditary angioedema.  As I write this, I’m looking at the trophy on his desk he got when it was approved. 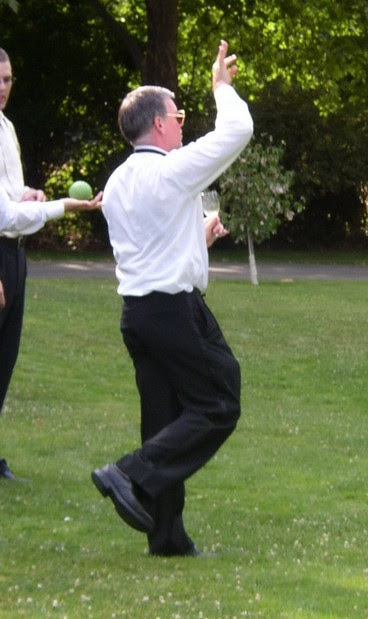 Dave demonstrating his impeccable bocce technique at my wedding.

Dave finished his career at Vertex Pharmaceuticals, where he served as Vice President and Head of Innovation and Methodology, and worked on FDA approval of Trikafta. Vertex for a long time has been the main company working on cystic fibrosis treatments. The disease makes it hard to impossible to breathe, and it’s effectively fatal: few people with it live past their 30’s.

This is a hard disease to develop treatments for because it is so rare; to get a big enough N in your clinical trial you have to enroll most of the people who suffer from it. Since a new drug can cost billions of dollars to develop, most pharmaceutical companies won’t even try to treat diseases without millions of potential customers, but fortunately, the US government has financial incentives for pharmaceutical companies to pursue therapies for rare diseases, and Vertex built its business on this funding for “orphan” drug development.

In the US, about 90% of people with cystic fibrosis suffer from a common genetic mutation, and based on that discovery in 1989 Vertex had a few promising therapies they were pursuing. Until recently, they were all not very effective. Trikafta was a cocktail of three of those therapies, and Dave led the analysis of the clinical trial data for this approach.

It worked. Cystic fibrosis is now a manageable condition. I dare you to read this article about it with dry eyes.

When Dave came back from the FDA advisory committee hearing during the approval process he tearfully described the testimony he witnessed from trial participants begging the FDA to approve the drug so they could continue taking it, so they could see their children grow up. He considered getting Trikafta approved a highpoint of his career.

We in his family, though, remember him for what he gave us personally.

At Colgate, Dave learned to “work hard, play hard.” He adhered to this philosophy for the rest of his life, and passed it on to us.

Around the time I graduated high school, when they moved to better-paying industry jobs, Dave and Victoria moved into a spacious condo a few blocks away from the tiny apartment we had lived in together in Brookline. As they both got better and better jobs, the houses I went to for summer visits and Christmases grew larger and larger. In 2001, they finally “made it official” and got married.

By the time our first child was born, Dave and Victoria had a vacation home in Wareham, MA near the beach, where our “Brady Bunch” family (my mother’s 3 natural children, and Dave’s 3) would meet for a week in the summer and Yuletide. It had lots of bedrooms, a pingpong table in the basement, and a well stocked refrigerator, and it was always a great time. 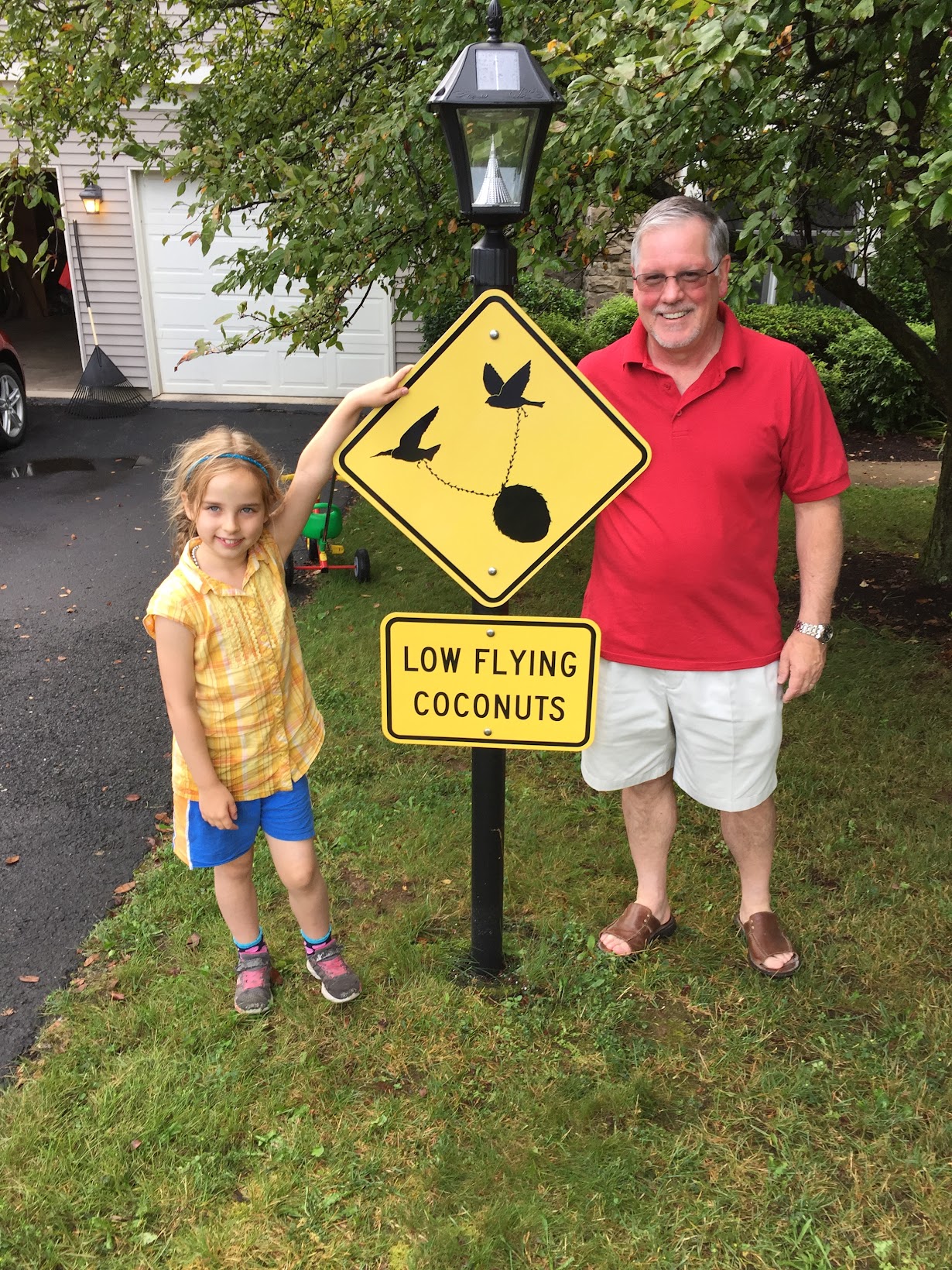 Dave and G just after installing one of Karen’s works of art at our house.

Eventually, as the grandchildren became more numerous (they now have 13), they relocated to Pembroke, MA, in a big house on the North River (where I am writing this now), and moved their vacation residence to Mount Vernon, WA, on Big Lake, not far from where I was born and my twin brothers live with their families.

Dave was well known for his love of cinema (both classic and recent) and catnaps (and, more than occasionally, combining the two.) He was particularly fond of and expert at trivia, poker, and fantasy sports, and for 20 years was commissioner of the family and friends league I am a member of. Dave also made sure to pass lots of Amato family pastimes on to the next generation, including all-terrian bocce and dice and card games like Onze and Mexican.

Dave loved music, from classic rock to modern stuff. My contribution to the family canon was during grad school, when I introduced them to the Old 97s and Jackie Greene. “I Don’t Want To Miss A Thing” by Aerosmith was “their song”, which  Victoria and Dave played at their wedding. Ever since, putting it on the Sonos was a guaranteed way to make them stop whatever they were doing and dance together.

Dave loved good drink, good food, the occasional cigar, and he especially liked providing these for others. His mainstay cocktail was the Perfect Manhattan. On special occasions, like Christmas morning, he would prepare a huge batch of his Bloody Mary recipe, which remains unmatched in the world. My personal favorite is his recipe for marinated steak tips, which I’ve never been able to reproduce (it requires a cut of steak that seems to only be available in the Boston area, but other cuts still make for a yummy meal). (Some of) Dave’s family, at Christmas shortly after his diagnosis.

Dave’s legacy is his family and the values he instilled in us, but also…

After being diagnosed with a glioblastoma in 2018, Dave began compiling much of his lifelong wisdom including his favorite films, card and dice games, and food and drink recipes at www.TheBearKnowsBest.com. (Dave was fondly known since his college days and to his family as “The Bear”).

Please go take a look, leave a comment, add some ingredients to your grocery list for a weekend dinner, try out a drink recipe, get some family and friends together and play one of the dice or card games, have a laugh at the funny lists, or get one of his favorite books or movies.

I know he’d appreciate it.