What’s the role of a plant biologist in a life science consortium?

When you hear “life sciences” your mind probably goes to the life you spend most time thinking about — your own. For most people, this moniker conjures thoughts of our lives and those close to us, as well as the things that threaten these lives. While it’s true that life scientists study human life, we also study all other forms of life (remember kingdoms from your elementary science education?). Within the Huck Institutes, we have students and researchers working in all of these kingdoms and seamlessly transitioning between them.

Being a member of the Huck Institutes has its undeniable benefits: from access to core facilities, to a great infrastructure, to wonderful programming put on by the HGSAC. We also have the ability to create interdisciplinary partnerships between programs and research areas. These are all great opportunities that we, as students, can take advantage of. When I think about this, though, I can’t help but wonder: what can those of us firmly rooted in the Plantae kingdom provide to the larger life science community?

All of this isn’t meant to be a manifesto in defense of plants, but rather a challenge to the way that we currently approach, think about, and teach about life. 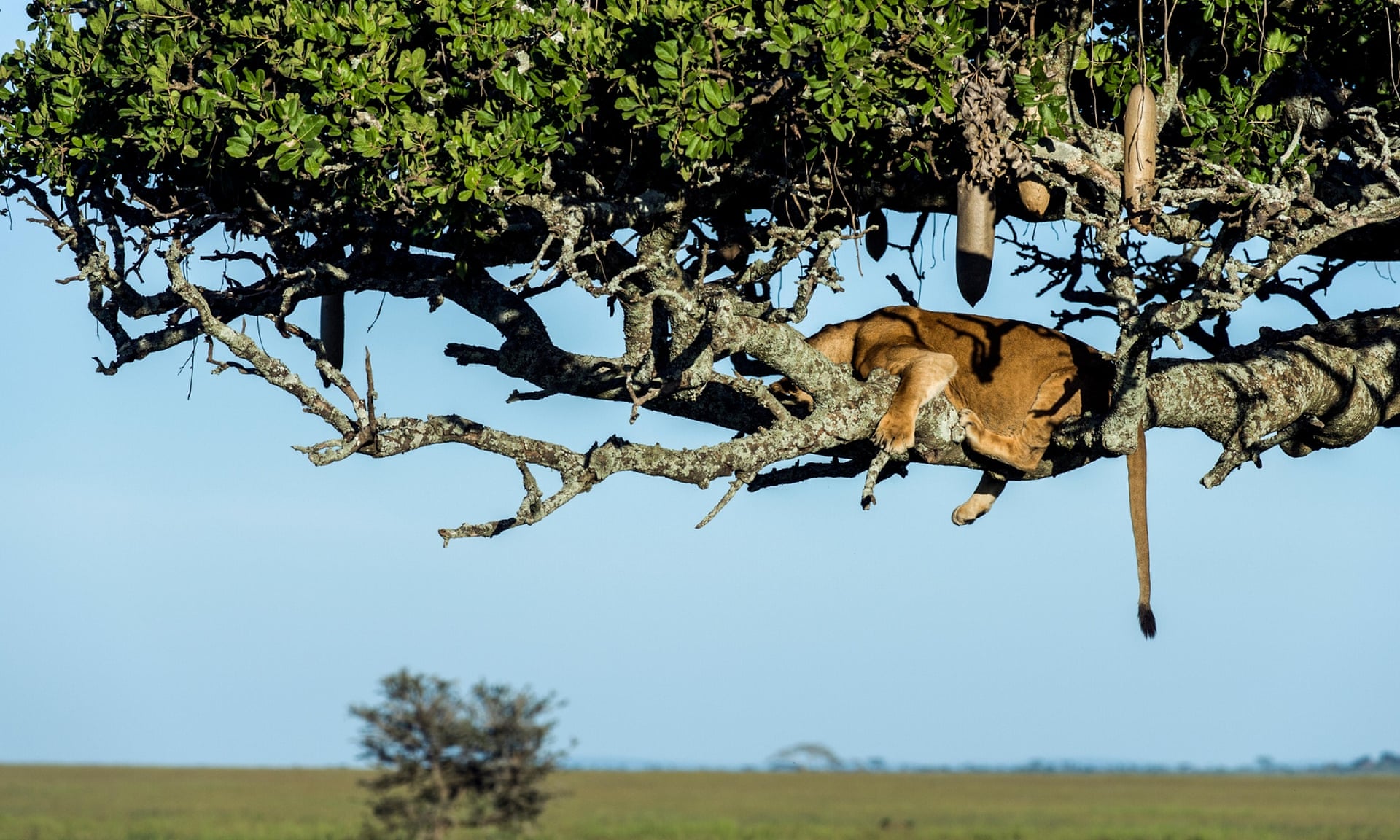 If I were to ask you what you saw in that picture above, you would probably say a lion, and not a Kigelia (or sausage tree). You wouldn’t be incorrect by saying that, but it is an illustration of what we, as humans, notice first — the animal. We might be hard-wired to do this or it could be an evolutionary response — I’d be much more worried about being attacked by the lion than the sausage tree (sorry sausage tree, you’re probably fierce, too). This behavior of overlooking the plants has resulted in a disease that plagues our society: plant blindness.

You’re probably suffering and you don’t even know it. If I were to ask you how many plants you’ve interacted with today, you might say zero (or a few, if you had to water them. Or a lot, if you’re a plant biologist). But did you have coffee? That comes from a plant. Are your clothes made of cotton? Again, a plant. Three of the biggest drivers of our modern lives: food, fiber, and fuel, all come from plants. They’re important, and there’s a lot that we don’t know.

There are over 400,000 different species of plants on earth, 90% of which are angiosperms, or flowering plants. Taken together, their biomass dwarfs that of all animals by a factor of 1000. Despite this, plant science has remained grossly underfunded (or, as Science calls us “the impoverished Cinderella in the biological research kingdom”), and calls to change this haven’t prompted much action.

Plant biologists in the Huck Institutes can help combat this problem by working with our colleagues and creating awareness. It may sound silly, but plant blindness is a serious problem. It’s not hyperbolic to say that the future of the world depends on plant science. Unlike may other basic research areas, plant science didn’t see bombastic growth in the early 2000s, and we’re not suffering from a glut of PhD-holders as a result. There are jobs!

Recently, plant scientists have gained a bit of street cred in popular culture. Though there have been many instances in the past, most people have an awareness of Mark Watney, portrayed by Matt Damon in The Martian. In the official trailer, he says “I am the greatest botanist on this planet.” Dr. Chris Martine, a botanist and professor at Bucknell University, recently named a new species Solanum watneyi after Mark Watney because he believes that this cool botanist will revive his field. There are also real plants in space, so is it really science fiction?

Other than The Martian, though, the “plant scientist as protagonist” plot device doesn’t get much love. Chris Cooper played an orchid-hunter in Adaptation and Liam Neeson a “mild-mannered botanist” in 2011’s Unknown. Elizabeth Gilbert’s book about a botanist, The Signature of All Things, wasn’t quite as successful as Eat, Pray, Love, but it was still spreading the word. Recently, Dr. Hope Jahren published her memoir, Lab Girl, telling her story of struggle and triumph in science (see the NYT review) that has gotten quite a bit of popular press. And who can forget the educational whirlwind of Idiocracy which teaches us that plants need electrolytes.

We have gotten a bit more love in the realm of cool, educational things (not an oxymoron). Michael Pollan’s Botany of Desire launched a whole new series of conversations about the co-evolution of humans and plants and how plants have shaped our society. An episode of NOVA got many people, even my Grandpa, to wonder about plant communication. The food movement, in which people have become more engaged in what’s in their food and where it comes from, has increased our interest in growing food, but has also resulted in a constant battle against misinformation. If everyone knew a plant biologist, would we be in the same place that we are right now with GMOs?

I’m a recovering, self-professed plant hater. I wasn’t intrigued, or even faintly interested, in plants until I started doing independent research on them halfway through college. Whether my hatred stemmed from the garden chores I had as a child is unknown, but I do know that the classroom education that I received about plants was lackluster. That’s not to say that I didn’t have phenomenal educators, but what we learned about plants left a lot to be desired. Plant scientists are developing new ways to combat this, ranging from engagement at the K-12 level through the PlantingScience program, to changing the classes taught in post-secondary education. It’s often the case, though, that student’s exposure to plants in introductory courses isn’t being done by a plant biologist but by someone who specialized in another form of biology.

Unlike Penn State, not every school has a robust plant biology research program, yet students educated in these other programs may very well go on to teach introductory biology courses, all of which have some sort of plant component. This section, usually consisting of the memorization of photosynthesis, is often met by the collective groans of students, and likely the instructor, too, if he or she has no background or connection to the plant sciences. So, team, this is where we come in.

As part of the Huck Institutes, we’re interacting daily with people who may go on to be these instructors and teach students boring things about plants. As plant biologists, we have to convince them not to do this. There are lots of cool and interesting things about plants. I mean, Buzzfeed even wrote a listicle about it. RNAi and transposable elements were first discovered in plants (if you want to keep things scientific). The banana that we all eat today is threatened and the coffee that starts each of your days may be a thing of the past soon. Maybe you don’t drink coffee, but keep that chocolate close, too. The 2015 Nobel Prize in Physiology or Medicine was awarded, in part, to Youyou Tu for her work on the isolation of a novel plant compound used for malaria treatment.

The take away? Plants are cool. And necessary. So are well-educated scientists who can educate a scientifically-literate population. We have a world to feed, and we’ll need plant biologists to do that, but we’ll also need a population that’s accepting of the science that we put forward. This requires that we have a whole cadre of scientists to stand by us, and a whole population that knows that there’s something more than photosynthesis happening with our greener brethren. Our role as plant biologists in a life science consortium like the Huck Institutes is to be sure that no one that we interact with suffers from plant blindness, and they’ll go on to do their part to eradicate it in the general population.

Assuming that you’ve made it this far, you might be interested in figuring out what you can do to improve the plant education of your future students. If you want to keep it science-heavy, you can always attend some of the plant biology seminars. You can delve into the popular media that I referenced above. You can get to know a plant biologist – we’re not too scary, and you’ll always find some of us at Huck coffee hours and happy hours! You can volunteer to help us with outreach events where we teach kids and the public about plants. You can also just grow your own plants. If you have questions about why your tomato plant looks a little funky, ask us. We’ll give you an answer that is way more than you probably need, but you’ll learn something.

Margaret Conover covered many of these same topics in a TEDx talk, and she ends with some great points. Watch that, too.