Cracking Stuxnet is a TED talk that was delivered by Ralph Langner back in March 2011.  Ralph Langner is a German computer scientist who, along with his team, was responsible for reverse engineering the most sophisticated computer virus attack in history:  the 2011 Stuxnet virus. Here is the summary given by ted.com for his TED talk: “When first discovered in 2010, the Stuxnet computer worm posed a baffling puzzle. Beyond its sophistication loomed a more troubling mystery: its purpose. Ralph Langner and team helped crack the code that revealed this digital warhead’s final target. In a fascinating look inside cyber-forensics, he explains how — and makes a bold (and, it turns out, correct) guess at its shocking origins.”

I think that the most important aspect that Ralph displays is his intense amount of confidence. This is important, because people need to be reassured that the information that they are listening to is coming from a respectable, credible source. One important thing that I found that Mr. Langer did in his talk was that he constantly walked across the stage, making eye contact with the entire audience, which made people feel more open to receiving the information, as if they were a part of the conversation. This makes him a very credible and convincing speaker. 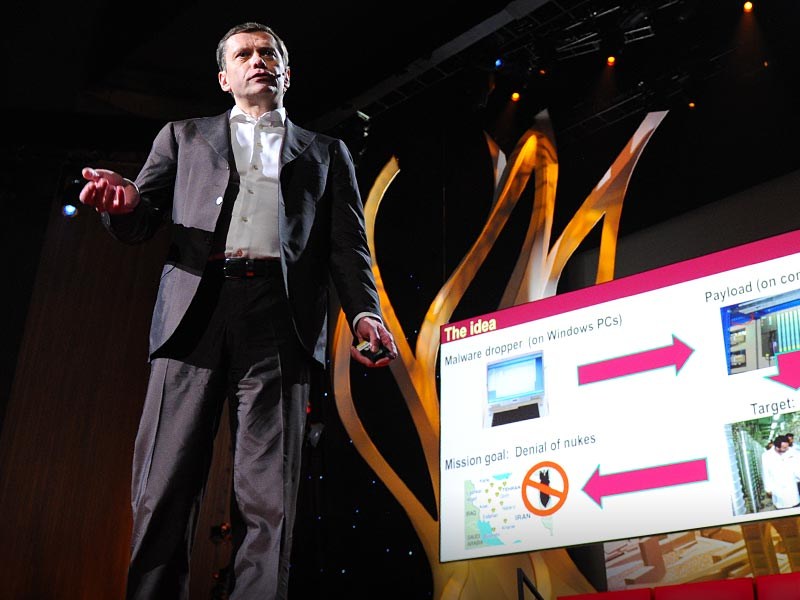 Mr. Langner’s use of humor was vital in order to keep a more light, comfortable feel to a very serious topic. Langner’s humor throughout the speech was also able to keep the audience very involved. An example of Langner’s use of humor would be when he mentioned that the Stuxnet virus “acted like a lab rat that didn’t like cheese.” He then preceded to make a face imitating a rat rejecting cheese. Mr. Langner also was effective in communicating to a less informed audience when he made metaphors to every day things that people understood, such as how people pirate movies in a movie theater. His use of his slideshow was also effective in communicating complex ideas to an audience that otherwise would not understand them.