This week, I am going to discuss a cool tech lady very near and dear to my heart: Dr. Saiph Savage. I met Dr. Savage at a neighborhood block party in the fall of 2016. We painted matching “Hello World” (the name of the first program every student writes) wine glasses together and discussed coding and technology. Her and her husband are assistant professors of computer science at West Virginia University (WVU) and visiting professors at Carnegie Mellon University. After meeting her, I emailed her asking if she would allow me to do research in her lab, and she was extremely open and encouraging. Dr. Savage actually started the Human-Computer Interaction Laboratory at West Virginia University! 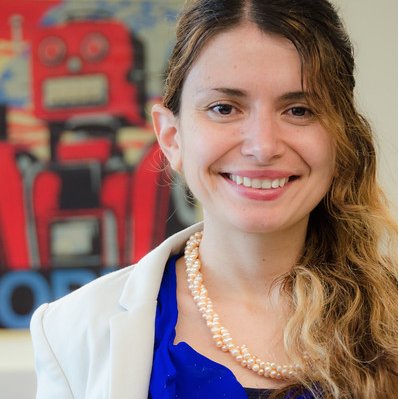 Much of Dr. Savage’s current research centers around online bots and blockchain, and how technology can be used for political and civic engagement. In 2015, Dr. Savage helped create a system called “Botivist” that recruited “humans to do social good for their community” (HuffPost). This bot looked for keywords relevant to those complaining about corruption in Latin America, specifically the words “corrupcion” (corruption) and “impunidad” (impunity). The Botivist tweeted at people complaining on Twitter, asked them relevant follow-up questions, asked them “to volunteer to help the problem they were complaining about” (Savage). Her study found Botivist could actually modify people’s behavior and encouraged them to share their concerns with others through social media.

In addition to having the technical knowledge to implement systems such as Botivist, Dr. Savage is also concerned about the ethical implications of online bots. “It’s relatively benign for bots to notify humans about specifically hateful or dangerous words – and let the humans decide what to do about it…But it could be alarming if we ask bots to influence people’s free expression of genuine feelings or thoughts.”

Dr. Savage is nationally recognized for her contribution to the field of human-computer interaction. She was named an Under 35 Innovator by MIT Tech Review in 2018, had an article published by Huffington Post, and was interviewed by the BBC. If you want to read more about Dr. Savage’s work, I would highly recommend visiting her website: http://www.saiph.org. I have really only scratched the surface of all the cool things this tech lady has done!

Under Professor Savage, I worked on a research project for e-NABLE, a nonprofit organization that makes 3D printed prosthetic hands for children. I also created my own twitter bot, the Statler Bot, to answer commonly asked questions for the WVU Statler College of Engineering. Last summer, I worked on a team with Dr. Savage at Carnegie Mellon to research online crowd workers, specifically on the Amazon Mechanical Turk platforms, and the methods they use to earn more money while working online.

In addition to being an extremely talented and gifted young woman, Saiph Savage is an incredibly kind and helpful role model. I would not be where I am today if it was not for all the work she put into developing me as a programmer, researcher, and person. All in all, I would say she tops the charts of cool tech ladies.