My dear friend from college had two pet axolotls. They were both female, and she had only planned on having the two, until her friend offered her a third.

He thought it was a female as well. He was wrong. The axolotls got down to doing what axolotls do, and my friend was left with a mass of eggs. Ever resourceful, she kept the eggs to use in the high-school biology class she taught. It was a great learning opportunity, as the students could look at them under a microscope and see the embryos developing. If any hatched, she thought her students could adopt some of them and take them home. Her friend reassured her that all of the eggs never hatched anyway, and that he never got too many axolotls from a batch of eggs at one time.

Her friend was wrong again.

By the time I spoke to my friend, she had over 200 baby axolotls.

As they had grown, she had kept moving them to larger and larger containers. When I spoke to her, she revealed the full extent of this –– her basement now contained a kiddie pool, 4 fish tanks, 12 plastic buckets and several other containers, all full of wriggling baby axolotls.

This was not a sustainable situation. She needed to find homes for them, and fast, before they got large enough to start breeding. She gave some away to her students and friends, and found a few pet stores that were interested. But by the time she was done, she still had over 100 axolotls left. At this point she was overwhelmed –– there were a lot of hungry little mouths to feed, and the extra humidity from the kiddie pool and all the tanks was causing mold to grow in her basement. She turned to me for help, asking if I was interested or knew of anyone who was.

I got down to work. I reached out to my co-workers, knowing that there were several in the Entomology Department at Penn State who had a fascination for animals and an interest in unusual pets. As I expected, there were several who were interested. The trick was getting the axolotls to them, as my friend lived several hours away.

It was time for a road trip.

When I visited my friend and she took me down to the basement, I got to experience the sheer volume of axolotls for myself. I sat down next to the kiddie pool and watch the axolotls floating around, bumping into each other and wriggling away. Something that struck me were the sounds –– they made soft, watery popping sounds like they were all blowing little bubbles.

My friend filled my order ­–– 37 axolotls, all packaged in individual containers and ready for travel. We carried the trays out to my car carefully and place them in a large cooler in the back. Axolotls need cool water, and the abnormally-warm fall weather had me worried. I got on the road and went.

Fortunately, the ride was smooth. All of the axolotls made it safely to my apartment, where I gave them some fresh water and food and sent out the call for people to come and get their wriggly little noodles. My house became an axolotl dealing operation for the next few days. I’m not even sure what my neighbors thought was going on. But the axolotls each went to their respective homes –– a local school teacher took a few for his class, another took a few for his office on campus to use for scientific outreach. One mother took a few for her excited son, who now reads to them at night before he goes to bed and checks on them first thing every morning.

Within a few days, all the axolotls were gone, and I had even gotten a few requests for more the next time I visited my friend. Time for another road trip!

I wrote a post about the importance of writing up your graduate research projects as manuscripts. Check it out here at GradHacker on Inside Higher Ed.

We're in the midst of conference season. I'm getting ready for the 2018 ESA, ESC and ESBC Joint Annual Meeting in Vancouver, Canada, from November 11-14. This will be the largest meeting of entomologists this year, and will feature researchers from around the world.
This meeting also coincides with the Entomological Collections Network annual meeting from November 10-11, which is attended by collection managers, museum workers and anyone else interested in entomology collections. Is your research difficult to communicate? Put pictures on the back of your business cards to show people what you're talking about. It's a great conversation starter, perfect for networking at mixers. Photo by Carolyn Trietsch.

For everyone else who is getting ready to attend a conference, here are some tips to help you prepare:

Good luck at your conferences, and safe travels!

While looking over a friend’s bioethics paper, I noticed the following citation:

It looks like a normal citation, but wait– what is that number in the middle? Is that a page number? Yes, it is!

This immediately brought back memories of 9th grade when I was formally trained how to take notes and cite sources. In those days of MLA, providing a citation with the page number was key to fighting plagiarism, the enemy of original thought, and what is more valuable to education than that? (I guess funding, but that’s beside the point ).

You see, I miss page numbers. I haven’t seen page numbers since my literary criticism classes in college, where a page number showed that yes, you did read all of those sources you listed in the bibliography. Or at least the important parts of them.

Oftentimes, a page number is all that stands between looking up a single sentence or spending hours rifling through hundreds of pages trying find that one stupid sentence. 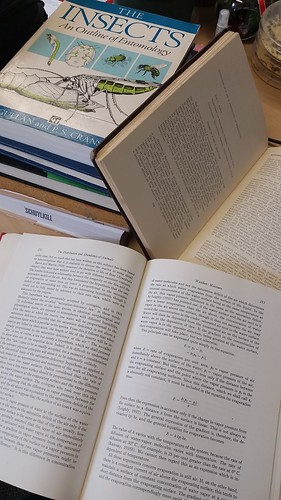 Where was that sentence with all the information I need? I swear, I just saw it five minutes ago.... Photo by Carolyn Trietsch. All rights reserved.

Why don’t we use page numbers in science? Is it because it’s a lot of work? Or is it because page numbers aren’t useful anymore, as most of us read online publications as soon as they are released in our efforts to stay up to date  with the cutting edge of science?

Though I understand that online sources can be more easily navigated with “Ctrl-F”, I think that page numbers are still immensely useful in citations. It communicates  to your reader that you are not just making things up and attributing them to someone else—it shows that you did get that fact from somewhere, and that you can show exactly where you got it from. It shows  that you can be held accountable for your work, and that you can back up what you’re saying with more than just an author name and year.

Page numbers are more than just a courtesy to your readers––they facilitate your readers’ own research by directing them towards relevant portions of other relevant research. And isn’t clear communication our responsibility as scientists?

Page numbers are also immensely helpful to the author. Haven’t you ever fallen into the trap where you read something but forget where it was in the paper, and you know it’s in there, but you can’t find it ?

I don’t think that adding page numbers is a waste of time, especially when you’re doing citations anyway. In fact, the simple act of jotting down the page number can save time when you need to go back to the original source and check something, and suddenly don’t have to reread the entire source to find that one thing you were looking for.

Give page numbers a chance, and try it out for yourself—what’s the worst that can happen?