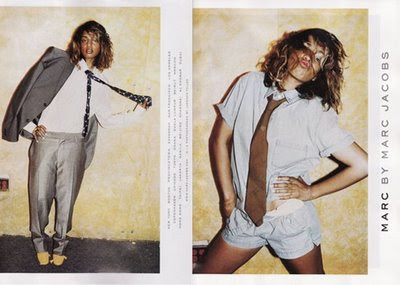 Girls have always been girls, the ones who play with dolls, wear pink, sew, and any other activity that is seen as “girly”, but lately things have mixed around, and society’s gender roles aren’t so set in stone anymore. Take Marc Jacob’s fashion advertisement. In it, we see the famous musician M.I.A dress as boyishly as a girl possibly could. In the picture on the left, she is dressed in a men’s business suit pants and a men’s blazer, topped off with a nice tie. In the picture on the right, she is also wearing a tie and a collared shirt, all giving off the impression that she is a man. Even the length of her hair, although slightly longer, can be seen as a boyishly long mane. It trumps society’s held commonplace that women are those polite, demure gentlewomen and overturns the automatic vision of a girl model, those that are seductively showing off their long legs and skinny bodies, or those that give off a natural air of lighthearted “girly-ness”, those who are beautiful. Marc Jacobs uses M.I.A’s boyish looks to demonstrate that women do not have to always follow society’s default perspective of girl; he displays a paradigm shift that has occurred in America’s culture: reversal of gender roles. Because of Marc Jacob’s high status in the luxury fashion industry, this overturn of commonplace is no longer obscure, but instead desired by women. It instills a strength and power; women not only can dress as men, but also can take on their role in society, the one that gives them a power stage where they dominate the family balance of power, the job market, the advancement of the world. Women have that power, too. Through this argument, Marc Jacobs attracts those women who are attracted to that change, who want that change in society, and slyly markets his clothing to them in a persuasive manner. His advertisement utilizes rhetorical appeals such as his ethos and that play on a women’s desire for change in gender roles to sell his clothing, but he also proves a point, a point that may be poignant for himself as a man who is gay. Gender roles aren’t what society makes of them-it’s what the individual makes of him or herself and how they will act in society and how they will contribute to it.

This entry was posted in RCL and tagged rcl, rcl1213, summers, week5. Bookmark the permalink.