There has been a lot of debate in the presidential nominations for the 2016 race. Hillary Clinton and Bernie Sanders are running for the Democratic nomination, receiving a lot of support from the left side of the isle. Jeb Bush and Scott walker are the popular names for the Republican nomination. However another popular name that has received the most media attention recently is Donald Trump. He has announced his political campaign a few months and is currently running in the Republican party. As a large business owner, Trump doesn’t take too fondly to listening and taking orders from other people. This is what makes him unique from the rest of the nominations. Trump has been speaking his mind on public issues regardless of what popular opinion has been and has received mixed reviews because of it. 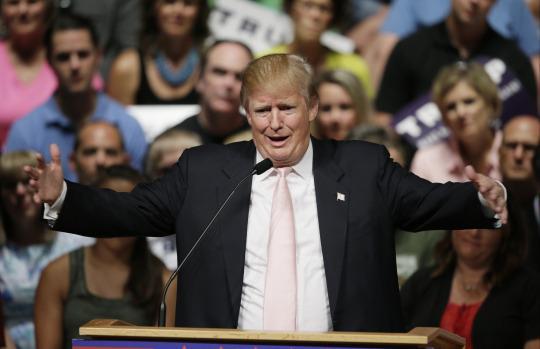 One of the toughest Rhetoric situations someone can be in, is running for president. Convincing an entire of country full of different backgrounds and experience is not an easy task. Many people are used to the usual nominations of saying whatever their party asks, and trying to appeal to the largest audience possible. Trump has taken a different approach. With an ego of one of the most successful men in America, he definitely shows it in his speeches. Trump has received a lot of support (and plenty of criticism) because of his rhetoric strategy. Right now Trump is second only to Jeb Bush in the Republican polls, but if he keeps making his extremely bold statements, anything could happen. Whether you support or think Trump is an idiot, his campaign is extremely entertaining and it’s interesting to watch a candidate with this approach.

Trump is definitely a leader that backs down to no one and doesn’t like losing, as entertaining as his campaign is, maybe he is the right candidate.

Read the whole article and statistics at https://www.yahoo.com/politics/gop-voters-we-want-more-donald-trump-125083158241.html