The Roman Constitution was not written down and evolved overtime. This unwritten law is based mainly on tradition, called the Mos Maiorum, or the “Way of the Elders”. Thus, keeping with old traditions was very important to the political elites of Rome.

Only full citizen adult males could participate. There were two wings of government: Gatherings of Roman citizens (senate/assemblies) and executive officers attached to those gatherings. 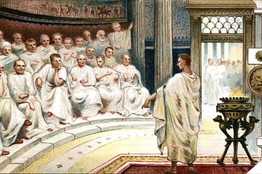 The senate of Rome composed of ex-magistrates, and when entered into the senate they served for life. They had no legal power and played only an advisory role. They offered advise (sententiae) issued in decrees (sentatus consulta). The senates authority (auctoritas) grew vastly due to leadership and success in war time.

By 200 BC the senate dominated Roman politics in foreign affairs and finance. Senatus consulta were routinely passed by popular assemblies into law. Senatorial politics were a constant shifting of alliances in where no one became too powerful. There were no political parties, instead the senate held a factional model. There was a common resistance to the “new man” or the outsider. Competition was a huge part of the senate.

But just as important was the tradition of Concordia. Concordia and collegiality dictated the way in which arguments, and politics as a whole, were governed. Roman Senators and politicians were expected to stand down from a position if not supported by the rest of the Senate. Politicians were expected to uphold the Collegiate style, respecting the office through it’s traditions. Again, Tiberius Gracchus opposed nearly all of these traditions in favor of pushing his reform forward in the name of the Roman people (Talbert).

The Plebeian Tribal Assembly played an important role in the life of Tiberius Gracchus. This assembly was a direct result of the struggle of the orders in order for the plebs to have a say in government. Only plebs could attend and they were split into 35 voting blocks called tribes, which were determined by locality.  Out of this assembly there were Tribunes of the Plebs. Tribunes were not magistrates, and there were 10 elected every year.

Tribunes of the Plebs convoked meetings of plebeian assembly. They debated issues before the plebs and put proposals before them. They assembly voted formally on these proposals and if they received a majority of votes, then they became plebiscita or official law. Tribunes also had veto power. Any assembly, election, legislation or senatorial decree could be vetoed by a tribune. This is important to note, because while the Tribune had great power in assembly the Plebs and using a veto, they always consulted with the Senate firstly, respecting the old traditions. Tiberius Gracchus’ refusal of this system, and immediate summoning of a plebiscite, offended the sensibilities of the old Senatorial class.