The United States is seen as a place of opportunity, a refuge, and a fresh start. With the vision of the American dream and ideals, hundreds of thousands of immigrants have made the journey to settle in the United States. The thought of being ruled by democracy is a refreshing thought to those who had no say in their government. But is the United States still seen as an oasis when they detain their own citizens in internment camps because of their assumed association with the country they fled from? In what light can Asian Americans view political commercials that ridicule stereotypical Asian elements? With the defamiliarization of language in the following commercials, what are the issues of political representation vs. racial representation? Because of this, there is a blur between Asian and Asian American. How does this blurring affect the stereotype of the “ideal immigrants”? Both of these commercials address the “foreign menace”, China. Although some of the analytics are wrong, the art of persuasion and motivation shows what a commercial can do to racial stereotypes.

This commercial aired during the 2012 Super Bowl to promote Pete Hoekstra’s run for the Michigan Senate seat against Debbie Stabenow. The opening depicts rice fields, an Asian woman speaking broken English on a bicycle with the sound of gongs in the background. Because of these stereotypical Asian elements prominently displayed, Hoekstra received backlash for this racist commercial. The backlash also caused the actress to issue a public apology for participating in the commercial(click here to read her apology). With a clear pun on Stabenow’s name, “Spend It Now”, Hoekstra points to the fact that the United States is borrowing too much money while American jobs are being stolen by Asians. The division between Asian and Asian American shows a connection between the political representation and the racial representation in television commercials in the United States. Racial representation of typical Asian features overpowers the political correctness to establish the difference between an American citizen of Asian descent and an Asian. 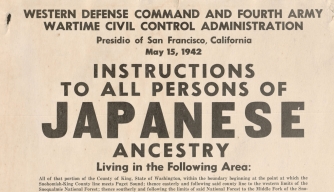 In this commercial, the assumed “Asian accent” technique de-familiarizes language. Because of the accent, viewers are more likely to believe the authenticity of the statement “I take your job”. But with broken English, what kind of jobs would be taken? It is most likely that the low income, non-specialized jobs would experience increased applications. The de-familiarization of language connects to what generation is being depicted in the commercial. The more assimilated into American society an immigrant is, the less prominent their accent. By portraying this Asian woman with broken English, she is not assimilated. However, Asian Americans are viewed as the ideal immigrants. Asian Americans are viewed as intelligent immigrants that greatly contribute to the areas of science, engineering, and technology. This contests the argument in the commercial that Asian immigrants are taking American jobs; rather they are helping in the fields were Americans may be lacking.

By implying that Asians are stealing jobs from Americans, Hoekstra is bringing back the fear of “yellow peril”. With the idea of “yellow peril”, Hoekstra is separating Asian American into Asian AND American. When Executive Order 9066 was ordered, “it was a real blow when everyone, regardless of citizenship, was ordered to evacuate” (Okubo, 17). By just looking at someone, you cannot pinpoint their ethnicity and more importantly their citizenship, which is why it is common that the term Asian is used to cover the broad spectrum of Asian ethnicities. This blur of identity is why Asian ethnicities are not respected in television commercials. While their racial identity is easily exploited through television, it can be seen throughout history that their political identity is also under represented. 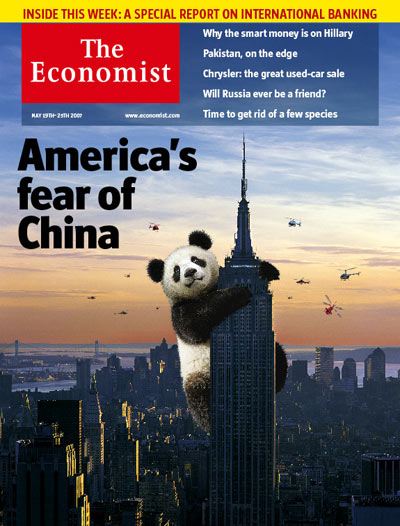 This issue of The Economist appeared in 2007 and explicitly displays “America’s fear of China”. By making a play on the movie King Kong, The Economist shows a panda on top of the Empire State Building. The use of a panda, native to China, only further shows the stereotypical Asian elements that can be seen in the political commercials.  By displaying this peaceful looking panda, The Economist is subtly implying that there is no need to fear China. However, recent political commercials are saying the opposite.

In an October 27, 2010 NPR broadcast by Jeff Yang, he remarks of today’s political commercials “you’ll notice that a remarkable bipartisan coalition has coalesced around one of the most critical geopolitical issues of the day: our relationship with China. And the common ground they’ve arrived at appears to be that China is evil, scary, and poised to eat our lunch” (click here for article). Surprisingly, these ads do not ooze political correctness that is so prominent in political debates. Because China appears as a threat to the United States in some aspects, all Chinese are threats. Chinese Americans are grouped into this assumption. It doesn’t matter where you were born, how long you have been a citizen, or your education; if you look like the enemy then you are the enemy.  Yang continues to explain, “That’s what makes the widespread demonization of China and “the Chinese” so frightening to Asian Americans: The line between Asians on that side of the ocean and those on this side has always been blurry to those with a surplus of rage and a deficit of judgment”. The blur between Asian and Asian American is always present.

This commercial defamiliarizes language with the main language spoken as Chinese, with English subtitles. The Angry Asian Man blogger sheds light on the fact that the educator is speaking in a horrible Mandarin accent (click here for article). Although many would not know this without research, it brings into question the creditability of the commercial. Rather than trying to promote their assimilation into American society, this commercial retains their identity as Chinese. This phenomenon is also seen in Citizen 13660 by retaining their Japanese identity, but losing their identity as an American citizen. By claiming that the United States is a fallen nation, the professor is promoting how China has survived through the years and turmoil that has befallen the country. In a sense, the professor is questions why the hundreds of thousands of Asians that immigrated to the United States; these immigrants would have been better off staying in their own country. Not every immigrant wants to come the United States.

The Asian stereotypes have recently been depicted in the Chris Rock comedy sketch at the Oscars (click here for video). In this setting, the audience allows themselves to laugh. But when these stereotypes enter the political sphere, they are taken in bad humor. The different medium that Asian stereotypes are delivered significantly impacts how an audience receives them. Because of the United States’ previous treatment of Asian Americans and the focus on the “foreign menace”, there is a blur between political and racial representation. In many instances, it is almost as if Asian American blurs into just Asian. The United States is a country whose population is comprised almost entirely of immigrants–but when will Asian Americans be recognized as political representatives of America, rather than of Asia?