Africa is described as the “continent of beginnings,” yet it has somehow become the poorest continent viewed as a land of tragedy? (Moran, Abramson, Moran, 2012).  Comprised of 54 states, Africa is historically rich with diversity and cultural, but Westernization is threatening to extinct African culture like a sticky milkshake covering the globe. Westernization is defined as the process whereby societies come under or adopt Western culture in areas such as industry, technology, politics, economics, lifestyle, law, norms, customs, traditions, language, religion and philosophy (Wikipedia, n.d.).  The states that comprise Africa have been unsuccessful in finding unity as it relates to preserving their rich history and cultural norms and traditions. This is due, in part by several conditions:

Wole Akande states, “the reality is that in many important respects, Western culture (some would say American culture) remains the domineering force in the world today. Western culture fuels globalization today…and helps to reinforce the supremacy of the West.” (Akande, 2002.)  The homogenization of Western values in African states can be attributed to increased access to information technology and communications (such as internet connection and cell phone), and the flood of commercialized culture (resulting in marketable goods or services).

The improved infrastructure of African telecommunications is transforming lesser established cities by providing them the ability to communicate and receive information. For example, in 2000 there were only 30,000 cell phones in Nigeria; by 2012 there were 113 million (Muggah, Kilcullen, 2016). State citizens have increased access to the internet, news, educational broadcasts and social media.  However, much of the information made available to the people is sourced from Western civilization and serves as a force to propagate Western culture. “The end result becomes global integration at the expense of local disintegration” (Akande, 2002).

Leadership on the continent surely will have to unite to manage long-term plans to development of not only megacities such as Cairo, Kinshasa and Lagos, but also the rural areas which stand to make the greatest development strides. The challenged poised to leaders is how to accomplish this while still promoting the collectivist African cultural characteristics.

Muggah, R., Kilcullen, D. (2016, May 4). These are Africa’s fastest-growing cities-and they’ll make or break the continent.  Retrieved from https://www.weforum.org/agenda/2016/05/africa-biggest-cities-fragility/

On January 1, 2011, Dilma Rousseff took office as the first female president of Brazil.   For most American’s, this would be viewed as a major milestone in history. However, after almost 5 years in office, little has changed for the women of Brazil.

Moran describes Brazilian women’s need to work outside the home to assist with financially supporting the family, and that women are earning upper-level management positions and gaining greater political roles in local, state and national levels of government (Moran, 2014, p.352-3.)  Additionally, Moran describes Brazilians going to great lengths to present a good physical appearance, even going as far as plastic surgery to perfect their look. Additionally, women in a business setting are seen wearing low-cut, tight or transparent tops, and strapless tops (Moran, 2014, p. 349).  This may be true for a few elite Brizilians, but the portrayal of the masses paints quite a different picture.

The photo below is State Representative Ana Paula da Silva as she stands to take the oath of office in the Chamber Deputies in Santa Catarina, Brazil (Associated Press, 2019).  Ana was heavily criticized by her choice in wardrobe for the swearing in ceremony on social media platforms.  Can you imagine if Hillary Clinton or Michelle Obama showed up to the Presidential swearing in ceremony in such an outfit? 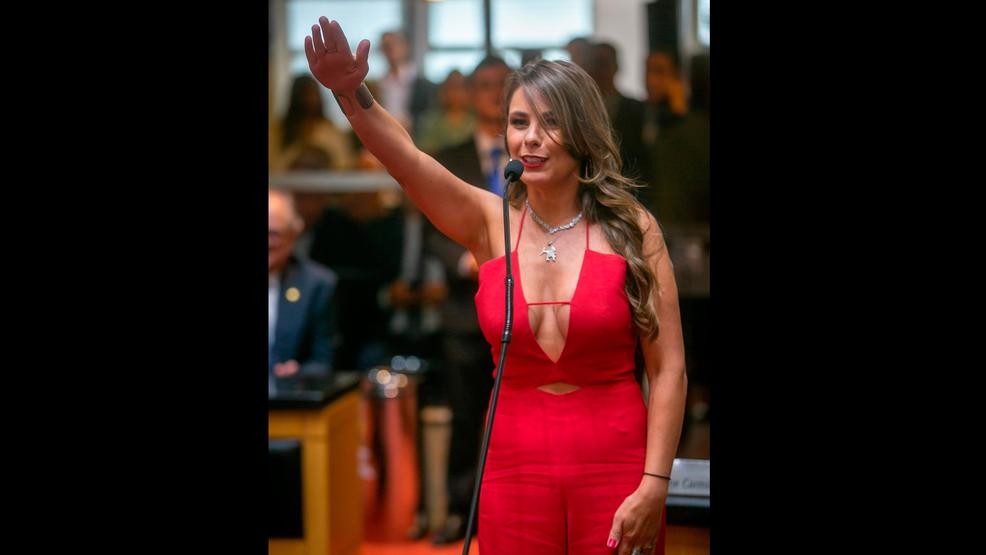 Furthermore, it sounds like the majority of women may prefer to be maiden like and of the home, according to Philippe Armand de Bonneval. (2016).  Culture of a nation might be one of the hardest things to change, as witnessed during a missed opportunity by San Paulo’s mayor’s wife, Bia Doria. Ms. Doria could have exhibit a strong female power in her position of power among the social elite of the country,  Instead, in an interview, Ms. Doria stated a busy day for her was “being stuck in traffic and seeing how beautiful life is on Instagram” (Armande de Bonneval, 2016). These types of comments depict women should not talk about complicated issues such as economics or politics.

According to New York Times columnist, Vanessa Barbara, feminism is still often viewed as a ridiculous extremism in Brazil (Barbara, 2014).  Barbara wrote that in a survey for the Institute for Applied Economic Research, 26% of Brazilian’s agree that women who wear revealing clothes deserved to be assaulted, and an astounding 59% said they thought there would be fewer rapes if women knew how to behave. The machismo culture is defined as an ideology  which is dominated by the strong and aggressive masculine pride. Perhaps women are simply afraid of the rampant violence against them in their country? Brazil has the seventh-highest rate of violence against women in the world, with a woman assaulted every 15 seconds and one murdered every two hours (Hargreaves, 2015).

Despite the opportunity for women to have a voice, the ability to step out of their culturally defined norms seems to be the exception, not the rule.  It seems women in Brazil may actually prefer following the norms of a traditional patriarchal society, or live in fear of leaving it. When powerful women in society set an example of empowerment for future generations to follow, perhaps the young Brazilian women will know that they deserve to contribute to the change in the machismo culture.

Women in the Middle East are slowly seeking ways to be incorporated in the application of the teachings and prescribed behaviors that govern their Islamic way of life.  Islam is an Arabic word meaning to surrender or submission to Allah or God, and is a way of life (Moran, Abramson, Moran, p. 298). Women are expected to be submissive to their husbands, or the male in the dominant role.  However, in modern day, there are several driving forces that are promoting positive change for women in the Middle East and North Africa (MENA).

As Dr. Fatima Mernissi stated, “The whole Muslim system is based on the assumption that the woman is a powerful and dangerous being (Moran, Abramson, Moral, p. 320). Breaking the glass ceiling brings new meaning to women in many of the countries that comprise the Middle East.  Middle Eastern women have a greater barrier to achieving leadership roles than traditional Western hurdles such as position pigeonholes, pay gaps, exclusivity, limited access to information, contacts and networking, training opportunities and risky assignments. Until recently, contemplating how to balance work and life outside of work wasn’t a great concern for middle eastern women.

The following is a glorified Hollywood video that exhibits the women’s commitment to honoring cultural tradition in a Middle East country (Smackouse, 2010.):

Although highly commercialized for film entertainment, this excerpt is indicative of the commitment to living the cultural tradition.  An additional video below, depicts the reaction to haram actions (Marlon, 2017).

So how are some of these powerful women overcome some of the cultural barriers to becoming entrepreneurs? It seems like there are “work-a-rounds” that are finding success for women such as Lamia Bouteleg, female co-founder of investment bank Capital Trust.  Instead of social networking, which is not widely accepted for women, she’s found success by scheduled appointments during traditional working hours. Another successful entrepreneur manufactures goods at home, with the help of women she has hired, and created as successful export business.  Others have found ease in leadership roles with the backing of their male family members.

It will be interesting to see in the coming decades how women in the Middle Eastern countries continue to promote change within their social, economic and cultural communities.  The world can only stand to benefit from the inclusion of women.

How women entrepreneurs are driving business in the Middle East. (2010, December 28). Retrieved from https://knowledge.wharton.upenn.edu/article/how-women-entrepreneurs-are-driving-business-in-the-middle-east/

A businessman orders a plate of spaghetti at a restaurant while on an expatriate assignment in Uzbekistan.  When it’s placed in front of him he questions the waiter about the unusual smell. The waiter responds, “They are fine. Other people ate them before you.” (2009. Cross-cultural misunderstandings…)  In China, an American English teacher uses the popular American game Taboo to teach vocabulary. The word was “baby” and described by saying, “So a man and a woman love each other very much…” A student shouted out “FINGERING” at which time the teacher burst out laughing. The student was confused about what the teacher found to be so humorous, because in China when a man asks for a woman’s hand in marriage, he is offering a finger ring (2005. Your stories: The funniest teaching experiences in China).  In this blog we’ll discuss the importance of cross- and inter-cultural training and their benefits on corporate ambitions.

Cross-cultural communication is a process whereby individuals from different cultural backgrounds attempt to share meanings (Moran, p. 40).  Examples, such as the businessman and American teacher, illustrates how important the awareness of intangible culture (language, customs, beliefs, values, and mores passed from one generation to the next can impact communication among group members (Moran, p.41). Thanks to alacritous changes in technology, international business is no longer the exception, but rather the norm in most business settings. So, how can one who is on a short-term assignment or an long-term expatriate experience prepare for immersion in a foreign culture?

There are techniques one can utilize to prepare for the assignment, minimize culture shock, and prevent premature departure. Cross-cultural or intercultural training companies have emerged in the last 10 years providing coaching, preparation and education to employees who are about to embark on living or working abroad. Trainers range from formally educated intercultural communications professionals to spouses of former expatriates who have personal ‘on-the-ground’ experience. Carl Burke, manager of Human Resource Global Services at Guidant Corporation suggest that expatriate assignments costs from $150,000 to $200,000 a year for us to keep a family abroad (Lang. 2004). So why do companies invest tens of thousands of dollars preparing employees and their families for these assignments?   This lofty investment in providing culture and communication specifics to employees are aimed at kicking-off or maintaining the objectives of the company on task.

According to PSL Corp, below is a list of the top ten tips for improving your intercultural communication skills:

According to Janet Bennet, executive director of the International Communication Institute, intercultural training should no longer be limited to just those seeking an expatriate assignment.  “Intercultural training seeks to teach people the knowledge, skills and motivation to communicate effectively and appropriately in a wide variety of cultural contexts,” according to Bennet, which can be applied to almost any work environment where people need to better understand how to communicate with foreign colleagues (Lang, 2004).  When deciding to engage in cross- or intercultural communication training, it’s important to consider the tips for improving your communication style. Otherwise, you may end up with a finger ring or plate of spaghetti that someone already ate before you!

Lang, Gretchen. (2004, January 24). Cross-cultural training: How much difference does it really make?  The New York Times.  Retrieved from https://www.nytimes.com/2004/01/24/news/crosscultural-training-how-much-difference-does-it-really-make.html?searchResultPosition=1

Your stories: The funniest teaching experiences in China. (2015, December 9). eChinacities. Retrieved from https://www.echinacities.com/expat-life/Your-Stories-Funniest-Teaching-Experiences-in-China

My name is Cathleen Phillips. I am a part-time non-traditional student returning to the college scene after 20 years.  This is my second OLEAD course.

In addition to being a student, I am also employed at the Penn State Berks campus as a non-credit program assistant.  I do a great deal of work to recruit and assist non-degree, certificate seeking students in programs such as the Practical Nursing, Project Management, Leadership Development, Construction Project Management, CAD and other professional development courses.

Personally, I am married for 21 years and a mother to two daughters, one a high school junior and the other a junior Kinesiology major at Penn State!  I live on a 25 acre hobby farm where my family cares for blank angus steers, chickens, goats, sheep, rabbits, and turkeys.  In my “spare time,” I like to attend my daughters extra-curricular activities which include equestrian jump competitions and USA Volleyball competitions.

I’m looking forward to learning from each other’s unique life experience and perspectives.   Best wishes in this class!