Once in a Lifetime: Crater Lake National Park 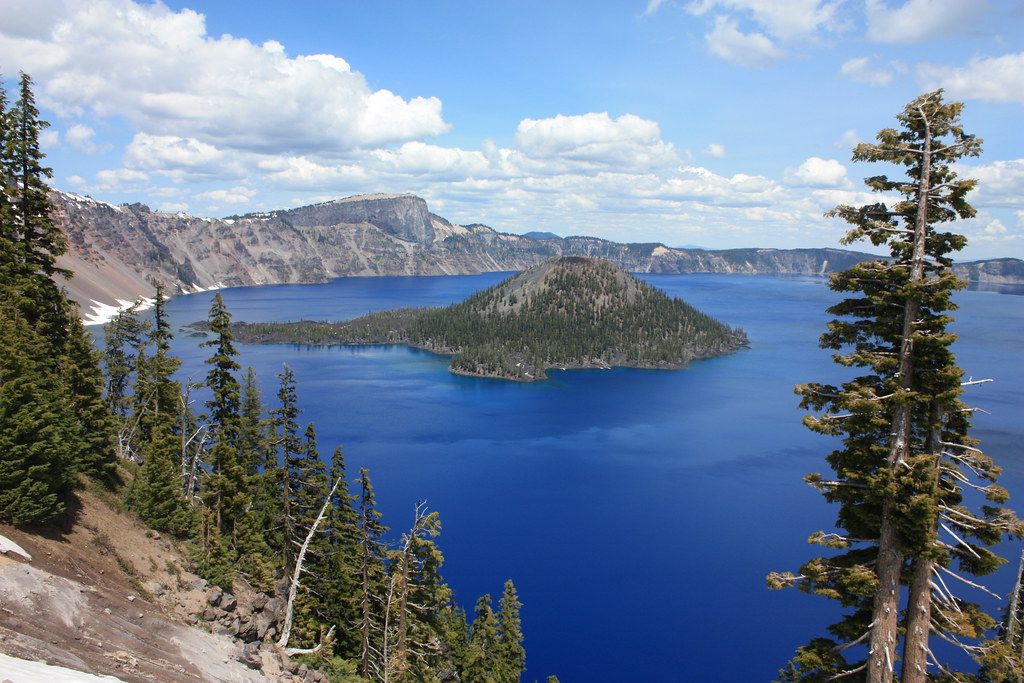 In the last eight weeks, we have climbed mountains, braved swamps, and scaled cliffs.  Our journey has spanned hundreds of miles and eight national parks.  Though now our boots are worn, I hope you’re ready for the final stretch because I guarantee that you have never imagined a place like Crater Lake National Park.  Yes folks, like the pioneers of the 1800’s, we’ve made it to Oregon.

About 8,000 years ago, Mount Mazama, a sister volcano to the renowned Mount St. Helen”s, erupted with such strength that the summit collapsed and left a huge crater called a caldera.  Over time, the snow, water, and ice from the peaks of the cliffs fell into the crater and filled it with water.  What was left is what meets you when you first set eyes on Crater Lake- a vast expanse of remarkably clear blue water- filling a nearly two thousand feet deep crater at the top of a mountain.

But how do you get there?  There is only one way- the Cleetwood Trail.  It is the singular way to reach the lake shore from the cliff faces.  A 1.1 mile trek, this trail will take you directly to the boat docks.  Here you have the opportunity to do some swimming or even take a boat tour around the volcano led by park rangers.

These boats will take you out to Wizard Island, the volcano in the center of the lake.  It is actually one of two islands that have formed in the lake.  Not many people are able to say they have stood on a volcano island within a lake, within another volcano.  But we will be.  Not too bad.

The ventures allow you three hours to explore the island, during which you can hike to the top of the cone volcano.  One visitor from Wizard island suggests taking a lunch up there and enjoying the view.  No matter what, we are in for a stunning vantage point.

Perhaps the greatest part about views from any point in this park is the air in the area.  Some of the clearest in the nation, there are areas from which you can see hundreds of miles away.  I’ve been told that there are few better feelings than  standing at the top of a mountain, taking in all of your surroundings.  And with that clean air, the refreshing sensation of this experience could not be rivaled by any other.

Beyond exploration of the lake, however, our time in the Cascade Mountains could be filled with several other ventures.  Many trails in the park lead to gorgeous waterfalls like the Toketee, Plaikni, and Vidae Falls, which are must-sees for people looking to get a full sense of the Cascade Mountains.  The hiking here can be strenuous at times but that’s no match for us now.  We’re no strangers to a rough hike.

At the end of the day, we get to say we’ve encountered an unprecedented natural environment, explored it, and come out the other side.  After experiencing something so pure, so remarkable, and so vast, I don’t see how anyone could end up having anything but an appreciation for nature and all its wonders.  Especially for us, who have only one stop left to go, it is one step closer to the close to ten weeks of adventures.  I hope it’s been as worthwhile for you as it has been for me.

3 responses to “Once in a Lifetime: Crater Lake National Park”