Pollution is a well-known word to many younger generations. According to the EPA, Pollution is defined as the presence in or introduction into the environment of a substance or thing that has harmful or poisonous effects. If these substances naturally occur in the environment, they are considered “pollutants” when they exceed Earth’s natural levels. There are two types of pollution on the planet today:

Primary Pollutants: A pollutant that is emitted directly from its source.

Carbon Dioxide contributes to the greenhouse-effect on Earth.

Secondary Pollutants: Pollutants that are not directly emitted as such, but forms when other pollutants (primary pollutants) react in the atmosphere. 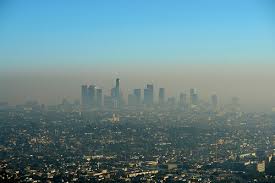 L.A is one of the cities in the U.S known for high levels of smog.

The first ingredient to smog is particulate matter. Particulate matter is released into the air because of the combustion of fossil fuels, particularly coal. The second component to smog is the ground level ozone, also known as “bad’ ozone. Ground level ozone is created by the chemical reactions between oxidized nitrogen atoms (NOx compounds) and volatile organic compounds (VOC’s) in the presence of sunlight. When all of these things occur and interact, smog is produced.

L.A is particularly vulnerable to smog conditions due to the large population of about 33 million people, non-stop traffic, terrain, and sunny climate. Due to the large population, there is a large amount of fuel combustion that is happening in a concentrated area. Along with this, California’s rocky terrain traps this pollution and forms a layer of ground-level ozone. Lastly, weather in L.A is mostly warm and muggy. When all of these factors come together, they contribute to the unhealthy levels of air pollution that effect the city of Los Angeles, California. During the hot summer months, smog is typically a common issue.

Breathing in smog can lead to a variety of health issues. Among these health issues, short and long-term respiratory problems can develop and people with asthma experience an increased chance for having an attack. According to an article written by The Los Angeles Times, the summer of 2016 was the worst year for smog since 2009.

What can you do to decrease pollution?

This is a bag house dust collector used in a commercial facility.

There are a variety of negative effects that can cause harm if we continue to emit the same levels of pollution. The U.S and China in particular are responsible for over 50 percent of the world’s emissions therefore, if we don’t try to correct these issues in the near future, the Earth and the people that inhabit it will experience severe consequences.