The Earth and its natural processes are considered to be a delicate system. With severe environmental issues facing the planet, the species that inhabit it are suffering. Since humans, plants, and animals all rely on these clean air and water sources for survival, the issue of contaminating the Earth is a serious issue that must be addressed.

Types of Dumping
As a result of improperly disposing of hazardous household waste (HHW), wastewater treatment facilities can’t handle the dangers associated with these hazardous contaminates effectively. In turn, these products release toxins and environmental pollution. These pollutants can also enter the atmosphere and water sources nearby.

Ocean Dumping
Communities around the world have used the ocean for waste disposal for years. Some of the materials that are dumped into the ocean include the disposal of chemical and industrial wastes, radioactive wastes, trash, munitions, sewage sludge, and other contaminated materials. The Marine Protection, Research and Sanctuaries Act of 1972 (MPRSA) or Ocean Dumping Act is one of several key environmental laws passed by the US EPA and Congress in 1972 to address the issue of ocean dumping. The act has two essential aims: to regulate intentional ocean disposal of materials and to authorize any related research of the effects. However, marine life and ocean habitats are still suffering the effects.

Landfills are the most common method to store waste.

Most developed countries such as the U.S utilize landfills to store their waste products. Some landfills are used for waste management purposes, such as the temporary storage, consolidation and transfer of waste, or the processing of waste material for storing, treating, or recycling.

Environmental dumping is the practice of shipping waste (household waste, industrial/nuclear waste, etc.) from one country to another. The goal is to take the waste to a country that has less strict environmental laws, or environmental laws that are not strictly enforced.

President Trump signed a bill that allows coal companies to dispose of waste into nearby water sources.

Trump signed a bill undoing the so-called Stream Protection Rule, which aimed to curb environmental damage from mountaintop removal coal mining. During the particularly violent mining process, coal companies blow up the tops of mountains by using mild explosives and dispose of the waste, which often contains heavy metals, in streams and other bodies of water. Research has suggested that this results in “adverse outcomes in community health” in many Appalachian towns. In addition, Trump also plans to roll back on President Obama’s climate change policies such as the Clean Power Plan. Trump mentions that the environment is taking a “back seat” due to his commitment to creating jobs in the energy industry.

Although the causes of the lead are still under investigation, this is an example of what could happen if waste such as: lead-based paint and lead-contaminated dust or soil, certain types of pottery, pewter, brass fixtures, food, and cosmetics are improperly disposed. 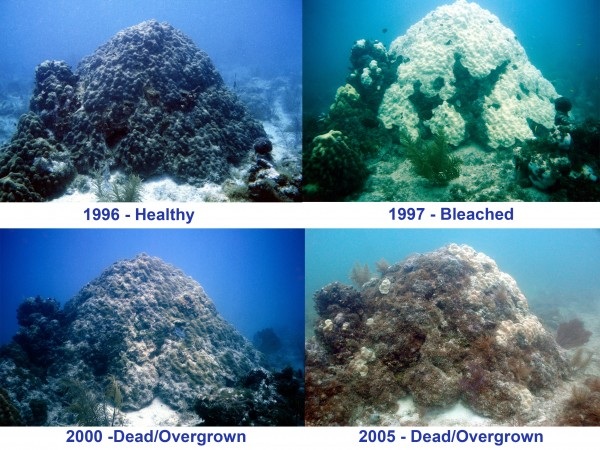 One of the most popular coral reefs, The Great Barrier Reef, has been strongly impacted by the raising levels of acid in ocean water. In the photo above, the stages of it’s “death” are displayed.

Contaminated water sources especially affect marine life. Ocean acidification is the presence of higher acid levels in the ocean over an extended period of time, caused primarily by uptake of carbon dioxide (CO2) from the atmosphere and materials dumped into the oceans. Since fish and other marine life are extremely sensitive to pH balances, this can affect everything from the lives of animals that depend on fish for food, to the fishing industry that humans rely on for profit.

Loss of Biodiversity
Also, as a result of contaminated resources and land, certain species may die off or disrupt the natural balances of the predator-prey relationships. This is defined as the loss of biodiversity. Imbalanced biodiversity or depletion of certain species of plants or animals in an area or on the whole planet are attributed to pollution due to dumping, climate change, and deforestation. All of these environmental issues can occur as a chain of events.

Despite the governmental actions regarding these severe issues, you can do a few things at home to help this cause. First, properly disposing of waste is critical. Be sure to recycle when possible, compost organic waste, and take care of dangerous household products. Most waste management companies take air conditioners, batteries, refrigerators, and other appliances and disposes them properly for minimal to no cost. By doing these things among others, it will make significant environmental differences.

3 thoughts on “The Effects of Improper Waste Disposal”