Napoleons Greatest Failure (No, Not Waterloo)

We all know about Napoleon, the angry little Frenchman. We all know that he lost the battle of Waterloo. In this post I’m not going to dispel any notions of Napoleon, but rather I’m here to tell you a new story. It is the story of how Napoleon once surrendered to rabbits. 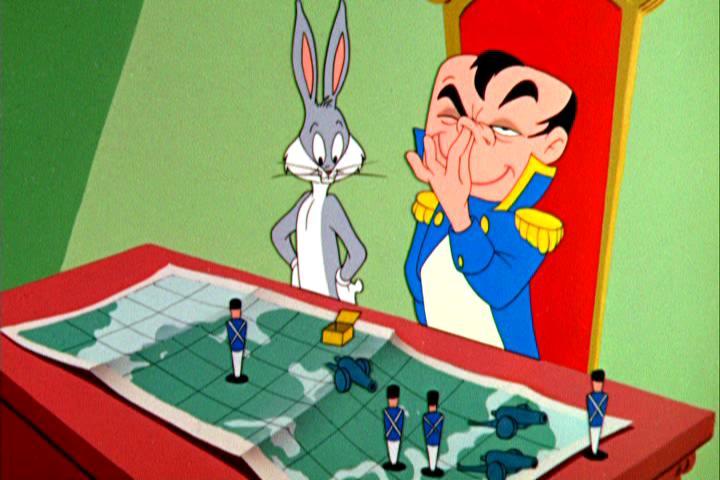 No, not this. (Yes, that is Napoleon picking his nose next to Bugs Bunny.

After Napoleon realized that he wasn’t going to win in Russia, he signed a treaty officially ending it. He then thought that to commemorate the occasion, he’d partake in the ever manly sport of rabbit hunting.

He rounded up some of his men to go hunting. He appointed his chief of staff to be in charge of collecting the rabbits for said hunt. After all, what can go wrong with a simple rabbit hunt? According to Monty Python, the answer is a lot.

The chief of staff collected somewhere between hundreds and thousands of rabbits for this hunt. I’m not really sure how many bunnies  Napoleon planned on hunting, but apparently he wasn’t taking any prisoners that day. So into the field went the brave bunny-hunting men to catch their quarry. They were unaware of the peril that they were about to become embroiled in.

When the convoy arrived, the rabbits were released into the field. I can only imagine that Napoleon wanted to stage a grand chase. After all, this is the man that took the crown out of the hands of the Pope and crowned himself Emperor. Contrary to his wishes, the rabbits began engaging in guerrilla tactics. In short, Napoleon’s hunting caravan was soon swarmed to the hilt in fluffy bunnies. Napoleon, like the great Emperor he was, promptly proceed to hop in his carriage speed away like his life depended on it, tossing rabbits out all the way (they’d even jumped in his carriage in his attempt to flee). As it turns out, the rabbits were domesticated. Wild rabbits would have run off because they fear people. The rabbits acquired for this hunt thought that the hunters were going to provide them with food. I once had a very similar occurrence happen with a roving band of chickens. It was not pleasant. Let this be a lesson, even the emperor of France can be beaten by the little guy.

P.S. Here is the link to a picture that describes the lesson Napoleon probably took away from the situation: http://www.pagecovers.com/user-covers/04-9-2012/kara__s_evil_bunnies.jpg

2 Responses to Napoleons Greatest Failure (No, Not Waterloo)