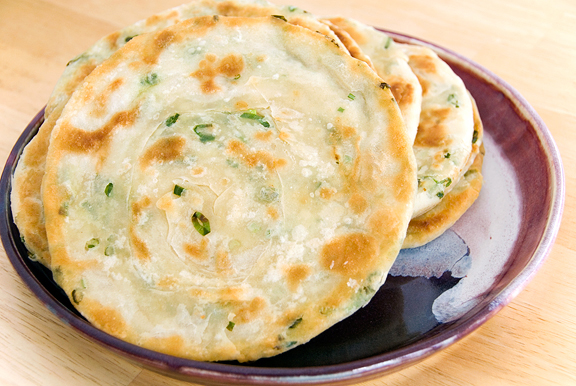 “Cong You Bing” or Taiwanese Scallion Pancakes consist of scallions, oil, and flatbread dough.  The dish is a savory treat that can be paired with any Chinese or Taiwanese main entrees.  Scallion pancakes are comparable to pita breads, but the consistency of scallion pancakes is much crispier and has a perfect combination of salty and greasy goodness.  There are some variations of Cong You Bing where chopped fennel greens and sesame seeds are included along with the scallions in the dough before the pancake is fried.  An additional method of cooking the scallion pancake is combining beaten eggs on one side of the pancake before frying in a pan.  The succulent flavors of the egg and scallion pancake make for a delicious snack during any time of the day.

Cong You Bing’s origin dates back so long ago that many Chinese historians cannot fully agree on where it was created.  Many believe Cong You Bing originated in Shanghai, where many Indians had once lived.  This makes sense due to the scallion pancake’s similarity to Indian naan bread.

There is one specific variation of the Taiwanese Scallion Pancake that is from Korea, seafood pancake or Haemul Pajeon.  It is made from batter, scallions, shrimp, and a little dipping sauce that goes along with the dish.  This is a very popular food in Korean culture and can be found ready-to-eat at Korean grocery stores such as H-Mart. Many times seafood pancakes are eaten with Kim Chi and Miso Soup for added flavor.  Based off of my own personal opinion (I have tried both pancakes before), I believe that Scallion Pancakes have a better taste and is more suitable for the likings of all people.  Not every person that I know enjoys seafood and the battered egg combination is much different from other dishes in various cultures.

#1) Create a thick dough by mixing water and flour

#5) Roll out the pancakes with a rolling pin and fry

#6) Serve and enjoy with soy sauce.