Imagine waking up in the back room of an oral surgeon’s office, with three holes in your mouth, to the sound of the doctor saying, “There were some malfunctions with your surgery, it’s going to be a long recovery.”  Not many people can say they died during their routine wisdom tooth extraction, but I sure can.  It’s a great conversation starter, in case you were wondering.

It was a Monday morning in January.  I anxiously got ready for my wisdom tooth surgery, and followed all of the rules.  I did not eat or drink 12 hours prior, I wore loose clothing, and I purchased a plethora of applesauce to aid with my healing for the days to come.  I obeyed my doctor’s orders, so why did the surgery go wrong?  I thought it was just going to be a routine dental surgery, but it turned out to be much worse.  While flipping through old magazines waiting to be called back into the operating room to begin the procedure, I said a quick prayer as I ran through all of the worst-case scenarios.  This would be my first surgery, and the first time I would go under anesthesia, so I was pretty nervous.

(This is a photo of my doctor with his nurses; mine was the one to the left of him!)

Finally the nurse came out and said the room was all ready for me, I unfortunately had to obey her, as I said goodbye to my mom and walked down the hallway.  Once in the room, I looked around and saw all of the tools they would be using.  Let me tell you, it was a bad idea to look at them, as you can see in the photo below. 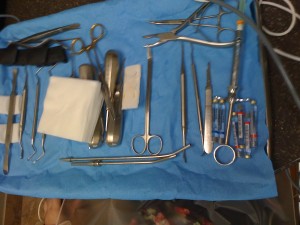 The doctor came in and the nurse began the anesthesia.  1…2…3…I was put into a peaceful sleep.  The doctor began removing my impacted wisdom teeth, and everything seemed to be going as planned.  But about half way through my procedure the heart monitor began beeping, and the doctors and nurse realized that I had “flat lined”.  They quickly stopped the anesthesia, and I started breathing again.  But, because the anesthesia was reduced, I began to feel the operation and wake up.  I felt the pain of each yank, tug, and tear.  I was lying down on an uncomfortable operating table staring into the eyes of a man holding a scalpel and using clamps to grip my jaw to keep it from moving.  I began to panic, and so did the doctor and his assistants.  They had not experienced anything like this before, but the worst was yet to come.  Once I realized what was happening I began screaming bloody murder and begging for him to stop.  I was partly awake, so I could feel and hear everything that was going on.  I heard pops and scrapes, and I could taste the bloody dripping down the back of my throat.

I tried to get off the table to leave, so the nurses had to hold me down and attach me to the table.  The pain was so excruciating that I passed out and fell back to sleep, and eventually, the operation ended.  When I woke back up, I saw the doctor and began yelling at him in my half drugged state.  I called him an “asshole”, and I told him he was the worst doctor and person I have ever come in contact with.

My mom rushed into the room as if she was running from a fire, and asked the doctor, “Who was screaming for the past hour in the back, it better not have been my daughter?”   He scowled and said I was a very “unruly patient, and someone they never experienced before”.  After the surgery and first confrontation with my mom, they took us into the “recovery room”.  The conversation went like this, “Mrs. Haupin your daughter flat lined during surgery and she was awake during it.  The screams were from her, and it is going to be a long recovery.”  With that news my mother fainted, and the nurse had to get her orange juice and a granola bar.  Instead of just one “unruly” patient, now there were two.  The doctor said he had to document the incident and notify my family doctor for legal reasons after my heart stopped, so we had to stay there even longer than planned before we were allowed to leave.  My father called the office after we left and the doctor explained the horrifying story to him.  He asked why he was not called to drive us home and the doctor did not have a response.

Once home, I immediately fell asleep, but when I woke up I experienced the worst pain of my life.  Since the procedure was so rough, additional cuts were created, as the teeth did not come out smoothly, therefore, the swelling was severe.  I looked like a chipmunk for two weeks, and everyone made fun of me at school.

(The face of misery)

The days went by and eventually I started to heal, but it was a slow and painful process.  If the doctor was more careful in monitoring the anesthesia, I would not have had a reaction and everything may have gone as planned, but I felt lucky to be alive.  This memory will stay with me forever.

When I visited my family doctor a few months after, he said that my oral surgeon never notified him with any issues in the surgery.  He actually lied and said everything went as planned.  See, I know this may sound disrespectful, but the doctor was a jerk like I thought when I called him an “asshole” in my traumatized state.

A few months went by after the surgery and I was at my summer job at a country club, as the bar cart girl on the golf course.  Who would’ve guessed that my doctor would walk right up and ask me for a beer.  We both knew who each other was, but we didn’t say a word.  I was traumatized all over again.

(The exact spot where he asked for a beer!  That’s my golf cart!)

There have been many cases in which surgery for wisdom tooth extraction have gone wrong, and some even have resulted in death.  I think it is important to gain awareness about the risks up front so that less people may experience the trauma that I did and so that the surgeries are better controlled and regulated.  Since the procedures seem so minor to the doctor, I believe that sometimes they may pay less attention and fail to monitor the patient in a responsible way.  In surgery, if one thing goes wrong, the results can be catastrophic, and honestly, I am lucky that my situation turned out alright, as I was able to fully recover within a few weeks.  For some, like Jenny Olenick in 2011, the case was not the same.  She died from the same surgical complication that happened to me.  During the so-called “routine” surgery, her heart stopped and she was oxygen deprived just after 15 minutes of surgery.  They were not monitoring her heart rate, and she died ten days later due to hypoxia.  The death was described as an “accident”, but the doctor was sued for negligence.

When your body does not have enough oxygen and your heart stops under anesthesia, brain damage occurs, and in her case it was severe.  Similarly, after my surgery, my father was panicked because I was having difficulty with my schoolwork, and the SAT’s were coming up.  He worried that I had some minor brain damage as a result of the operation, but in the end, I thankfully did not.  I remember looking online the days after during recovery and found this quote, “Like any surgery, wisdom tooth extraction carries risks. The most common complication — permanent nerve damage causing numbness of the tongue, lips or cheeks — affects more than 11,000 people annually, according to a 2007 report in the American Journal of Public Health. But the surgery has also been linked to jaw and tooth fractures, brain tissue infections, life-threatening bleeding and hypoxia…With all the risks, some dentists question whether the extraction surgeries are even necessary” (Parents Sue).

Then, after looking up Jenny, I found an even scarier article about someone who died after having surgical gauze stuck in his throat.  The doctor didn’t even know the gauze was there, and the man died of a heart attack.  I remember reading how he actually started coughing during surgery, but the surgeon was too oblivious to even notice, or take action.

(Where I sat during my recovery and researched people like Jenny)

It is important to ask your surgeon the “difficult questions” before surgery.  You should take your meetings with them very seriously, and ask questions.  Some questions may include understanding the type of equipment that will be used, what they would do in an emergency, and that they have a proper machine for monitoring the heart rate.  Jenny’s mother, Cathy Garger advocates with her awareness group “Families Eliminating Dental Deaths Urging Precautions, or FEDD UP” that all dental surgery that requires anesthesia should be done in the hospital where proper monitors are standard and available.  I was lucky they had a monitor in my surgeon’s office.  These are important to learn before surgery to understand the risks and to help ensure that things run smoothly in case of adverse reactions to the anesthesia.  In addition, understand that no surgery is minor, as anything can happen.  You must plan and prepare to minimize the risk of the worst, but hope for the best.  Make sure your doctor is experienced, trustworthy, open and honest with you, as people all react differently when under anesthesia during scary procedures.  Also, be thankful if things go as planned; even if you must make your way back through a scary event with a longer recovery, as I did.  Not all people are as fortunate after procedures with oral surgery requiring anesthesia.