This story is actually really interesting, I didn’t realize how intense the story behind the now mundane cold cereal is, but here we go.

The year was 1876 in Battle Creek Michigan, where Dr. John Kellogg owned and operated the Battle Creek Sanitarium (an asylum meant for people with chronic illnesses or those who are recovering from illnesses) . John was an orator for the Seventh Day Adventist Church, pretty much meaning he enforced his beliefs of vegetarianism, exercise, and nutrition.

The Sanitarium became extremely popular, so John called his younger brother Will to help him out. John always treated Will very poorly growing up, and gave Will the job of his assistant because he was not doing well financially. Will was in charge of running the kitchen, the books and keeping the place running while John was giving lectures.

One day John asked Will to find something new for the patients to eat because they were getting tired of the same healthy, vegetarian food everyday.  Will was trying to find something these people would want to eat when he accidentally left some of the dough out overnight. (This is totally true, check it out)

In the morning Will finds the dough and sees it has mold on it, but he doesn’t really care and puts it through the grinder and bakes it anyway, this creates what we know today as Corn Flakes. Will is super excited about it and shows John, who starts making the cereal for everyone at the sanitarium.

When the American industrialist C.W. Post stayed at the sanitarium he realized the potential of the cereal and commercialized its consumption . Post immediately capitalized their invention, creating a cereal beverage known as Postum, his first cold cereals known as Grape-Nuts, Elijah’s Manna, and Post Toasties, soon becoming a million-dollar industry. (Full Post timeline here)

Will became enraged and tells John that if they were to add sugar to the cereal everyone would want to eat it, but because John was a strict Seventh-Day Adventist he was opposed to the idea of adding an ingredient that would have made it unhealthy. 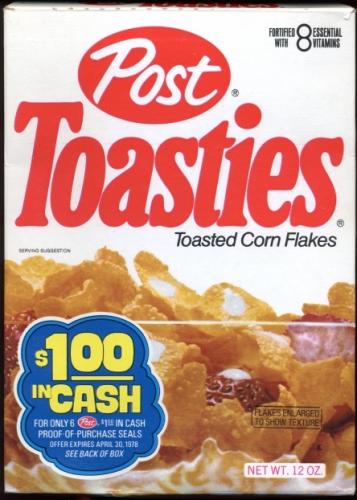 Will did it anyway and created Corn Flakes. He commercialized the product by creating some of the first modern advertising techniques such as branding, giving away free samples and catch-phrases. (“Wink at the grocer and see what you get”) Will made the company into a multi-million dollar enterprise, by the time of his death Kellogg’s was the number one cereal manufacturer in the region.

Unfortunately, the brothers had a falling out from the court cases and did not speak for eight years after the final law suit.

Eventually Will visited his brother and found John was slowly mentally deteriorating. On his deathbed, John wrote a letter to Will apologizing for not listening to him and being a bad brother and not supporting him but Will had gone blind so he never saw it.

On Will’s deathbed his staff told him that John had written him a letter of reconciliation and Will sat up and yelled “My goodness, why didn’t someone tell me before this?”