The Path-Goal Theory is about how leaders motivate subordinates to accomplish goals.  The path-goal theory emphasizes the relationship between the leader’s style and the characteristics of the subordinates and work setting (Northouse, 2013).  The path-goal theory, assumes that subordinates will be motivated if they think they are capable of performing their work, if they believe their efforts will result in a certain outcome and if they believe that the payoffs for their work are worthwhile.

Two years ago, my company faced several financial setbacks because of cuts in the Pennsylvania state budget.  These cut backs directly impacted the human services field.  As the director of the program in my county, one of the biggest challenges we encountered was cost saving measures.  Being faced with the possibility of having to lay off employees, my team and I needed to brainstorm and develop ideas as to how we could minimize costs so that layoffs would only occur as a last resort.  We came up with some basic ideas such as turning off lights when not in use, only making necessary purchases, limiting travel expenses and being mindful of the number of copies of forms we were making (just to name a few).

After analyzing some of our biggest expenses, I was able to determine that we were paying out a lot of money in overtime expenses.    Based on that information, it became clear to me that reducing overtime needed to be our main goal.  My goal for the team was to reduce overtime and the motivating factor was that if we were able to cut overtime expenses by 25% no employees would have to be furloughed.

The Path-Goal Theory is about motivating subordinates to accomplish a designated goal (Northouse, 2013).   When leaders select the proper style, they increase the subordinates’ chance for success and satisfaction. 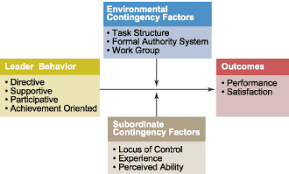 So what was the most effective way to approach the overtime situation?   As the leader utilizing the path-goal theory, I needed to know which behavior would work best for this situation.  There are four leader behaviors from which I could have utilized:

�  Directive:  This is similar to “Initiating Structure” or “Telling” style in situational leadership.  A leader who utilizes a directive approach, gives instructions about a task, how it is done, expectations and the timeline.

�  Supportive:  This resembles “Consideration Behavior”.  The leader is friendly and approachable, attending to the well-being and human needs of subordinates.  Supportive leaders go out of their way to make work pleasant for employees, and treat them as equals.

�  Participative:  The participative behavior refers to leaders who invite subordinates to share in decision making.

�  Achievement-Oriented:  This behavior is characterized by a leader who challenges subordinates to perform work at the highest level possible.  It establishes a higher standard of excellence and seeks continuous improvement.  These leaders show a high degree of confidence that subordinates are capable of accomplishing the work.

In order to minimize overtime, it was important that I included my subordinates in the discussion of goal achievement.  They needed to share their ideas and opinions and I needed to hear them.  Based on this, I needed to demonstrate a participative behavior style but I also needed to be aware of how my subordinates interpreted my style.  This included their affiliation, preferences for structure, desire for control and self-perceived levels of task ability (PSU WC, L.6.).  “Subordinates with internal locus of control believe they are in charge of the things that occur in their life” (Northouse, 2013).  It was important that my subordinates felt they were in charge and were allowed to be part of the decision making.

As it turns out, the team had very good ideas.  Participants made suggestions that included eliminating hours from positions that were already vacant and utilizing part time employees to help fill open hours.  Over a one year period, we cut overtime by 33%, exceeding our goal of 25%.  This was a huge accomplishment and the entire team felt a great deal of satisfaction knowing that no one’s job was going to be in jeopardy.  The path-goal theory cannot be applied to every situation, but I feel my story is a good example of when and how it can work!