Annette Messager was born in 1943 in Berck-sur-Mer, France. Her father was an architect, and her talents were encouraged by both parents. She attended college at the Ecole des Arts Décoratifs in Paris. She has had works displayed in cities such as Paris, New York, Tokyo, London, and Madrid. I like Annette Messager because of her unique blend of mediums, including knitting, photographs, and dismembered stuffed animals. She likes to take on different identities through her work; she is the trickster, collector, artist, tinkerer, peddler, cheater, practical woman, and messenger. Through her work, which is generally in the form of installation art, she showcases her views on three major themes: feminism, misogyny, and mortality. 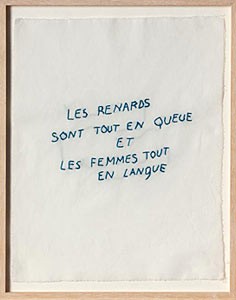 One of my favorites of her pieces is a series of over 120 embroideries on linen that spell out misogynistic French proverbs. The piece above reads, “Foxes are all tail and women are all tongue.” Others in the series read, “When a woman is born, even the walls weep”, and “What’s worse than one woman? Two women.” The choice to embroider was a powerful one: textiles have always been a branch of art branded “feminine”, and therefore, inferior. That conclusion is especially interesting when you break down what is “masculine” and what is “feminine” in the arts. For example, even though they involve roughly the same skills, lacemaking is considered feminine, while net making is masculine. In The Guerilla Girls’ Bedside Companion to the History of Western Art1, the Guerrilla Girls2 posed the real question: “If men had done the sewing, would underwear be hanging in the Lourve?” Messager’s pieces are crafted to be subversive and to challenge our views on what is culturally acceptable. Often, they closely toe the line between being playful and being perverse. Criticisms of her work have stemmed from the perceived pornographic nature of some of her works. These works include the series “Voluntary Tortures”, and “The Approaches.” Voluntary Tortures, shown above, depicts women in being subjected to various procedures, including breast suctioning, electrical baths, facial constriction, and rough depilatories applied to the skin. These images are supposed to appear ridiculous, but within the absurdity is a critique of the body standards imposed upon women by the male-driven society, including plastic surgery, hair removal, and dieting.

In The Approaches, Messager trails men through the street and snaps photos of their crotches without permission. In this, she turns the tables on the traditional artistic norm of the male “gaze3”, and in showing how uncomfortable and invasive this is, critique the viewing of women in a similar way, such as in gossip magazines. “It was a way of treating men as objects when it’s usually women who are treated as objects,” Messager explained. “Men never stop checking out women’s bottoms, breasts, everything.” 4

I’d like to close with a quote from Messager, regarding her artist boyfriend and her own art, “With Christian, I was the girlfriend. And since I was cute, well, it was thought impossible to be an artist and cute. At first, I felt proud when someone said, ‘Your work looks like a man did it.’ Then I realized that was stupid.”

—
1 The Guerrilla Girls’ Bedside Companion to the History of Western Art. New York: Penguin Books, 1998. 13.
2 A feminist group that describes themselves as “the conscience of the art world” and wears gorilla masks to maintain their anonymity.
3 The term used when the artistic audience is assumed to be a heterosexual male. For example, artistic nudes are created with the male gaze in mind, because their primary purpose is to please the viewer.
4 Riding, Alan. “Annette Messager: A Bold Messenger for Feminist Art.” The New York TImes. June 26, 2007. Accessed October 9, 2014. http://www.nytimes.com/2007/06/25/arts/25iht-messager.1.6316141.html?_r=0.