Ignorance is bliss.  It is an age-old and widely abided-by axiom; for many, it is far easier to disregard issues that do not directly affect them.  However, a recent ad campaign by Amnesty International is attempting to change this stance.  The global human rights group has used shocking and brutal images in several similar campaigns, attempting to turn public attention toward injustices around the world.  This campaign takes a more subtle but just as startling approach.  In its International Flag Campaign advertisements, Amnesty International challenges viewers’ ideologies and national identities in order to garner support for reform.

Each of the ads portrays a violation of human rights; however, the images of cruelty are washed out by the flag of the nation that they are associated with.  Using the symbol that represents a nation as the means of camouflaging the injustices carried out in its name is an ironic but very powerful statement in and of itself.  This tactic reminds viewers to be wary, lest they become unwitting participants in national crimes.  Prior to World War II, many German patriots turned a blind eye when Nazi policies began violating the rights of their Jewish neighbors.  They were blinded by the idea of a new national identity and unity, but inaction would ultimately contribute to the genocide that was to follow.  Seeing prisoners and victims who have been similarly robbed of basic rights, including freedom and life itself, obscured by flags that should guarantee protection serves as a stark reminder that citizens cannot always ride on the national bandwagon with clean consciences.

Securing women’s rights has long been one of Amnesty International’s most difficult challenges.  This campaign addresses the issue as it relates to Pakistan, showing a female citizen shackled at the wrists, her freedom illegally denied.  In Pakistan, the biggest obstacle to equality is not the law, which places no restrictions on women, but rather a traditionalist mindset.  Society has long been male-dominated, and few are willing to involve themselves in the personal affairs of others.  A man’s wife is generally considered his property, and his judgment in regards to her is seldom questioned.  Amnesty confronts this issue by removing it from the privacy of the home and displaying an abused women in plain sight.  The use of the Pakistani flag reminds viewers of reality: while women are constitutionally promised equal rights and quality of life, few see these promises delivered.  The ad prevents those who would rather not concern themselves with a neighbor’s actions from ignoring the issue, and encourages Pakistani’s to stand up for those who cannot protect themselves. 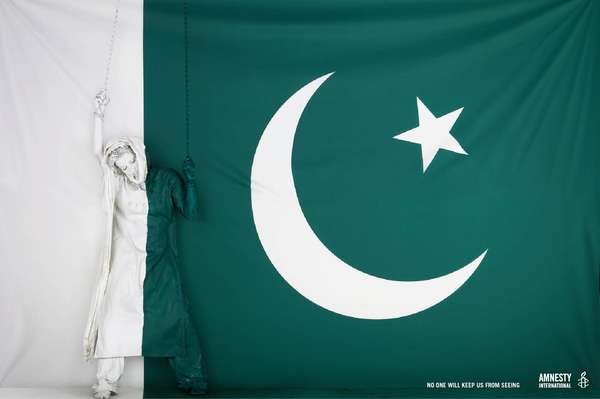 Angola borders the notoriously lawless Democratic Republic of the Congo (DRC) in southern Africa, but its human rights issues receive far less attention.  Like the DRC and many of its other neighbors, Angola is home to a large number of child soldiers.  Having fought to secure the nation’s independence in Angola’s civil war, these boys are unable to enjoy life under its new democracy.  Instead, their lives as unofficial freedom fighters continue, entirely unchanged since the war began.  Just as they fade into the background in Amnesty’s advertisement, Angola’s child soldiers have been largely forgotten by a government facing the challenges of establishing itself.  In a nation with far too many problems to address at once, child soldiers were considered easily dispensable.  The ad brings these victims back to the forefront.  It shames viewers by reminding them of those they have chosen to forget.  Furthermore, Amnesty’s audience is forced to realize that the youth is an integral part of ensuring Angola’s hopes for the future, and that if their lives are not improved the nation cannot move forward. 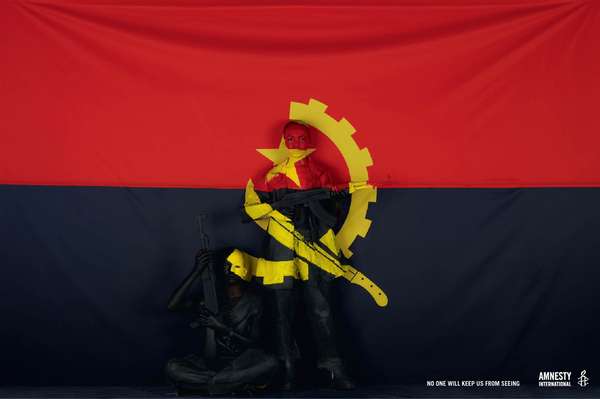 A third ad portrays what is largely considered to be the most blatant violation of human rights: the death penalty.  In Iran, public execution by hanging is a frequently employed punishment for a wide variety of crimes.  This blatant display of capital punishment is meant to dissuade would-be criminals; however, it robs those sentenced to this means of execution of not only life, but dignity as well.  While the sight of a lifeless, hanging body may have become common in some parts of Iran, the Amnesty International ad seeks to make this image disturbing even to the desensitized.  The deceased, covered by the colors of his nation’s flag, has lost his personal identity.  By stripping its subject of his individuality, the ad focuses its viewers’ attention on the dehumanizing effects of public capital punishment.  It quietly urges the audience to have sympathy for the condemned, even if it cannot change the nation’s practices. 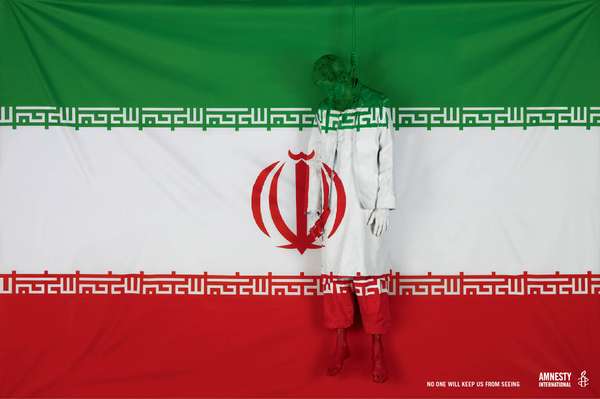 Arguably the most powerful ad in this series is that aimed at the American audience.  Considering the founding, Constitutional principles of the United States, Amnesty’s image is made even more persuasive.  Hooded and chained to one another, three Guantanamo Bay prisoners stand helplessly before an armed guard.  In a nation that prides itself on the security of rights to “life, liberty, and the pursuit of happiness,” viewers are forced to reexamine this notion.  Many prisoners of the infamous prison were accused of being terrorists; consequently, they were denied due process and subjected to physical and psychological torture.  Just as the men in the ad are cloaked by the flag, the transgressions against Guantanamo Bay prisoners were justified in the name of national security.  Amnesty seeks to portray the irony in attempting to protect the rights of a nation by intentionally denying them to certain individuals.  It reminds viewers of the danger that lies in a double standard, and encourages policy changes. 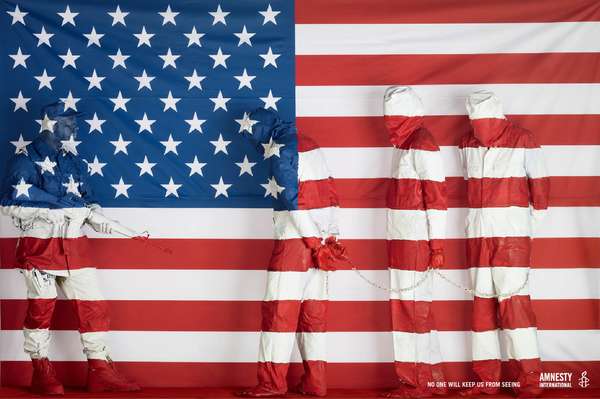 While these ads address several different issues, each component of the campaign has one distinct feature in common.  Displayed on each image is the slogan “No one will keep us from seeing.”  While Amnesty International challenges viewers to go against the crowd, it attempts to confront fears of alienation by giving its audience a sense of unity with fellow activists.  By using the pronoun “us,” Amnesty includes the viewer in its ranks.  This is a subtle attempt to reassure audiences in nations where swimming against the current can lead to one being an ostracized outcast; it reminds viewers that, although standing up for human rights requires them to leave a crowd that they are comfortable in, they will become members of a new union with greater purpose.

Finally, while the flag in each ad is used to represent the attempts to hide and ignore injustice, it also serves a second purpose.  Seeing their nation’s symbol juxtaposed with an act that goes against what it stands for can stir patriotic emotions within viewers.  Amnesty International utilizes a call that already exists within members of its audience to persuade them, the call to serve their country’s best interest.  It attempts to remind individuals of the principles that their nation stands for, and thereby move them to action in ensuring that those principles are upheld.

This entry was posted on Thursday, October 10th, 2013 at 1:42 pm and is filed under Rhetoric and Civic Life. You can follow any comments to this entry through the RSS 2.0 feed. You can leave a comment, or trackback from your own site.