Northeast China experiences especially harsh winters, with an average temperature of -16.8 degrees Celsius (just over 0 degrees Fahrenheit) and a minimum as low as 35 below zero (-31 degrees Fahrenheit).  While the climate would be a natural deterrent to most tourists, one city in the region has found a way to capitalize on the cold weather.

Harbin, capital of China’s Heilongjiang province, turned a long-standing tradition of the northeast region into an annual spectacle.  Since 1963, the city has hosted the Harbin International Ice and Snow Sculpture Festival, the largest celebration of its kind in the world.  Traditionally beginning on January fifth and lasting one month, the festival welcomes both traditional and modern sculptures.  As of 2007, Harbin boasts the Guinness World Record for largest snow sculpture.

The record-holding sculpture, 250 meters long and 8.5 meters high (over 270 yards long and more than 9 yards high, for comparison), was built in honor of Norman Bethune.  A Canadian physician famous for his revolutionary medical inventions, Bethune was also well-known for his anti-war sentiments and Communist ideals.  The snow sculpture created in his memory, called “Romantic Feelings,” featured elements reminiscent of the doctor, his work, and his homeland.

Snow sculptures are, in most cases, carved from a single block of packed snow (“Romantic Feelings” had to be created in two sections because of its immense size).  Sculptors use a wide range of tools, from hand shovels to hatchets, painstakingly shaping their masterpieces before crowds of onlookers.  In similar fashion, many popular attractions at the Harbin Festival are carved from ice.

Ice sculptures at the festival come in many forms.  One of the most common creations is the ice lantern, which has been popular in the region since long before the festival began.  These works are hollowed out by the sculptor and illuminated from within by a small candle; they are seen in both simple, traditional form and much more complex varieties.  Larger ice sculptures are often formed through a process very similar to that used to make snow sculptures: artists carve and chisel details into a solid block.  However, some artists have chosen to stray from traditional methods.  Implementing the latest technology in their work, some ice artists now sculpt with lasers.  This has allowed for increasingly intricate pieces to be made, and is one of the many reasons that Harbin continues to surprise visitors each year.

The festival is sponsored entirely by the government, with funds allocated from both the city and provincial treasuries.  Two areas of Harbin are designated for especially large projects, including one known as “Ice and Snow World.”  Open each night, this attraction features full-scale ice buildings.  Workers build the structures with blocks cut from the city’s river (the Songhua) and illuminate them with electric lighting.  Numerous other works, commissioned and unofficial, can be found throughout the city streets each year.

Tourists and locals also enjoy alpine sports, such as skiing and snowboarding, during the festival.  For the adventurous, sections of the Songhua River are open to swimming and diving from icy platforms.  Although infamous for snow and ice, Harbin also features pyrotechnics and fireworks to complement the festival’s frozen features. 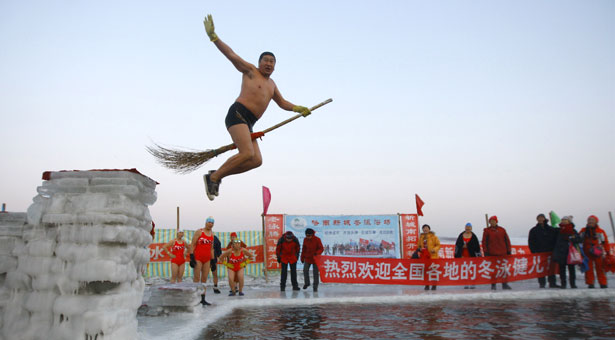 This entry was posted on Monday, October 14th, 2013 at 6:19 pm and is filed under Cultures and Customs. You can follow any comments to this entry through the RSS 2.0 feed. You can leave a comment, or trackback from your own site.