Although one of Brazil’s twenty-six states and home to several large cities, Amazonas remains largely covered by the dense foliage of South America’s lush rainforest.  In the depths of the jungle, many native tribes still follow their traditional ways of life.  Largely undisturbed by outsiders for many years, these independent natives carry on ancient practices and rituals that have contributed to their survival amid the perils that constantly surround them.

One of the largest of these groups is the Sateré-Mawé, a tribe of roughly ten thousand members that inhabits the northern region of Amazonas.  Although the tribe lives in relative seclusion and has little contact with outsiders, the Mawé have allowed the rare visitor to document their unique lifestyle and traditions.  Unaffected by external influences, the Mawé people offer a window into the rich history of American Natives.  They are a living example of a what used to be a much more common way of life.

While perhaps most notable to those who initially encountered them for being the first to cultivate guarana, the Mawé people are not primarily concerned with agriculture.  Their culture values strength and courage, qualities needed to protect the tribe from hostile neighbors and natural predators, as well as to provide a steady supply of food for its members.  Mawé warriors and hunters ensure the well-being of the tribe in many regards, and they are highly revered.  As a result, young boys in the tribe are raised with the purpose of becoming warriors constantly at mind.

Joining the ranks of Mawé warriors, however, is not an easy undertaking.  In one of the tribe’s most sacred rituals, young men hoping to gain the status of their elders must show themselves capable of enduring the worst that the jungle has to offer.  They prove their worth by remaining calm, often entirely expressionless, while experiencing excruciating pain.

The Mawé test their young men’s strength against a natural predator: the ant.  Although it may not seem a formidable challenge to a foreigner, the Amazon Rainforest is home to a particularly venomous species of ant.  A single sting from Paraponera clavata, the ant of choice for Mawé initiations, is capable of causing hours of pain.  The species has been nicknamed the “bullet ant” because a sting is said (by some victims) to be as painful as being shot.  The powerful toxin used by the ant attacks and interferes with the nervous system, often causing uncontrollable shaking even after the waves of pain have ceased.  The effects of a single ant sting have been known to last days; the warrior hopefuls of the Mawé tribe, however, do not sustain just one sting. 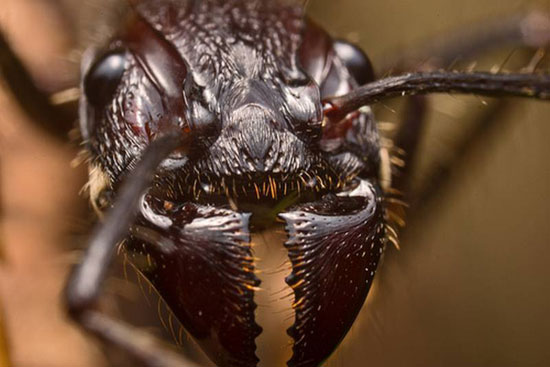 In preparation for the initiation ceremony, bullet ants are sedated and harvested from the jungle.  While unconscious, the ants are woven into a pair of gloves made from leaves, with their stingers facing inward.  To be considered a man of the tribe, boys as young as twelve will thrust their hands into the gloves for a full five minutes (or longer), being stung the entire time.  The tribe leads the initiates in song and dance during the ordeal, but this distraction is their only relief.

When the gloves are removed, the ants’ venom continues acting for hours.  In addition to the pain, it can cause muscle paralysis, disorientation, and hallucinations for hours.  And while completing the ceremony earns the young men respect, they must wear the gloves a total of twenty times before being considered fully initiated as tribal warriors.

This entry was posted on Saturday, November 16th, 2013 at 1:15 pm and is filed under Cultures and Customs. You can follow any comments to this entry through the RSS 2.0 feed. You can leave a comment, or trackback from your own site.