Across many regions and cultures, light holds a symbolic meaning, often serving as an image of life or hope.  As a result, it holds a significant place in a large number and variety of global traditions.  This is the case in many regions of Asia, where certain celebrations and commemorations are accompanied by the soft glow of paper lanterns and the sudden eruption of fireworks.

Lanterns and pyrotechnics are the main attractions of an annual Taiwanese celebration that is orchestrated between two districts, Pingxi and Yanshui.  Although the festival originated from ancient traditions, it was only made official at the end of the twentieth century.  Fortunately, however, this allowed for the Taiwanese people and their government to pool resources for the event, resulting in more ambitious projects and spectacular displays.

In Pingxi, elaborate lanterns up to ten feet tall are displayed throughout the streets.  Lanterns originally served a practical purpose, signalling that the town was secure.  Today, many are used to represent figures from popular culture as well as ancient folklore.  The most prominent lanterns often represent astrological signs, as the festival corresponds to the end of the lunar year on the Chinese calendar. 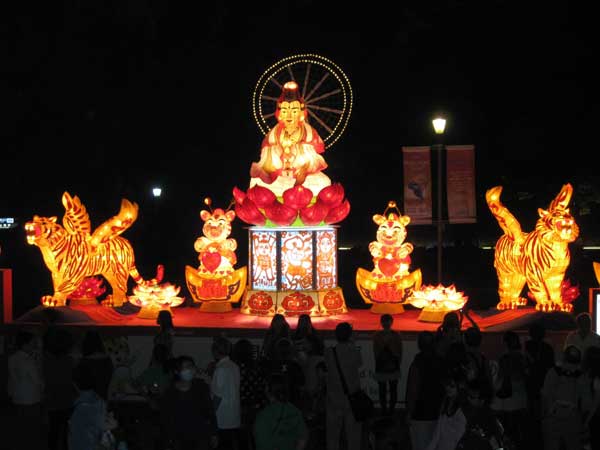 Pingxi is also filled with innumerable handheld lanterns during the festival, carried by residents and tourists who inscribe their wishes on them.  These are released in large number to be carried into the sky, further contributing to the spectacle.

In contrast to the peaceful scene in Pingxi, the Yanshui district recognizes the ending of a lunar year with a relatively unreserved tradition.  A pyre of fireworks is lit at the start of the evening and burns for hours (long into the following morning), creating a spectacular show.  The practice stems from similar displays, often put on outside of temples, that were meant to protect the district from evil.  Like the lanterns in Pingxi, the fireworks display in Yanshui not only draws visitors, but preserves important aspects of Taiwanese folklore and culture.

Another well-known lantern festival is observed annually (although at varying times in different regions) by the people of Japan.  Known as the Bon or Obon festival, it is a both a somber and joyful time as the Japanese honor their deceased relatives and spend time with their living families.

Bon, which has been practiced for hundreds of years, was named after a monk whose legend inspired the tradition.  The story holds that, with Buddha’s aid, the monk was able to bring peace and comfort to his mother’s spirit in the afterlife.  He also realized the full extent of her love and sacrifice for him, and came to appreciate her even more.  Following his example, the Bon festival typically revolves around the well-being of lost ancestors.  Families reunite and spend time cleaning the graves of the deceased, praying for their spirits, and generally honoring their lives.

Communal activities also take place throughout the festival.  Most notable is the Bon dance, a traditional performance meant to welcome and celebrate spirits of the dead.  The festival concludes with paper lanterns, representing the visiting spirits that are to depart once more.  Families place the lanterns on the river to be carried away, symbolizing the peaceful return to the afterlife that they wish their ancestors.  Bon serves to preserve tradition and recognize the contributions of the deceased while bringing families and communities together.  Fireworks and other celebrations often follow the conclusion of this socially important practice.

Many similar festivals take place throughout Asia at different parts of the year, each keeping history alive in its own way and promoting solidarity.  Furthermore, the practices have been carried across the globe by immigrants and expatriates, giving new life to age-old traditions.

This entry was posted on Thursday, January 30th, 2014 at 12:34 pm and is filed under Cultures and Customs. You can follow any comments to this entry through the RSS 2.0 feed. You can leave a comment, or trackback from your own site.