In many nations, culture and religion are closely linked.  Faith is so heavily intertwined with the history of some regions that it has become inseparable from their customs and celebrations.  This is especially common throughout Europe, where Catholicism has become a defining characteristic of many populations.

While some festivals originated from religious practices, many celebrations that were not religious in nature were adapted for the purposes of the Catholic church.  Popular customs were often linked to feast days celebrating the lives of saints and martyrs; this allowed for regional customs to continue unchanged while encouraging recognition of church holidays.  Spiritual leaders hoped that what were previously just annual parties would become religious events with a higher purpose and refined nature.  Although this was the case with many festivals, some remained largely unaltered despite being given a Catholic name.

The Portuguese city of Porto is home to a six-hundred year old street festival.  Festa de São João do Porto was named for Saint John in the 1800s, making it an official, citywide holiday.  Nevertheless, the traditions that predated the festival’s receipt of a new name continued to be practiced with little acknowledgement of their Catholic reinvention.  In fact, many of the city’s favorite practices related to the festival are of pagan rather than Christian origins.

The most notable custom of the day named for Saint John involves hitting others with hammers (made of soft materials to prevent injury) or soft plant stems such as leeks.  Ironically, striking another in this manner is a sign of affection or desire in Porto.  The tradition, which has no link to the holiday’s Catholic namesake, is believed to have descended from pagan customs. 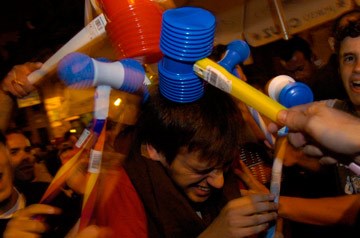 Religious practices that are common to many celebrations of church holidays in Europe are still found in Porto during the festival.  Services are held and followed by traditional processions and parades, and religious icons are often erected outside of homes.  However, the dominant practices and largest attractions of Festa de São João remain secular.  The festival appears to be more of an annual party that happens to fall on Saint John’s feast day than an orchestrated day of devotion or prayer.

Indeed, little of the day seems to be truly planned.  Much of the celebration, although following the precedent of years past, is spontaneous and unscheduled.  Festivities begin in the afternoon of June 23, falling near the summer solstice as another result of early pagan influence.  Revelers take to the streets wielding plastic hammers; vendors set up stalls selling food and wine; a variety of performers entertain the crowds from makeshift stages across the city.  As evening falls, the crowds shift toward the district of Porto known for having the best bars and restaurants, enjoying more food and plentiful wine.  In keeping with the impromptu nature of the festival, firework displays occasionally light up the sky until the grand show takes place at midnight. While some return home after the fireworks, the majority of Porto continues its party into the following morning.  Many make their way to the nearby beach, building bonfires and swimming in the sea until the sun rises.  Festa de São João has become one of Portugal’s most vibrant celebrations, but its mixed roots make it unique.  It is a celebration of nothing in particular, its nature to be determined by each participant.

This entry was posted on Friday, March 21st, 2014 at 5:14 pm and is filed under Cultures and Customs. You can follow any comments to this entry through the RSS 2.0 feed. You can leave a comment, or trackback from your own site.