Hinduism is the world’s third largest religion (following Christianity and Islam).  However, as the result of foreign influences and other divisions, its practices and beliefs tend to vary slightly between geographic regions or social groups.  The most widely recognized Hindu traditions are often those with the most widely distributed or greatest number of adherents.  A combination of these two factors has likely led to the popularity of the Thaipusam festival celebrated throughout India and other parts of Southeast Asia.

Celebrated by the Tamil (an ancient populace that is now spread primarily across India, Malaysia, and Sri Lanka), Thaipusam is often an opportunity to exhibit one’s religious devotion.  The festival celebrates the story of a battle between two groups of deities, the Suras and Asuras.  The former, having suffered multiple defeats, finally entreated the goddess Parvati (recognized as the source of victory for good over evil).  In assistance, she provided Murugan (her son and the god of war) with a powerful javelin so that he could help the Suras defeat their enemies.  The nature of this tradition, which recognizes the benevolence of Parvati, has led Thaipusam to also serve as a time to seek aid from or express gratitude to the gods.

The traditional practice on Thaipusam is to offer something to the gods in return for their aid.  The offerings are known as kavadi, and in their simplest form involve gifts such as pots of milk.  However, the term kavadi implies much more than a gift, it indicates a burden.  Hindus participating in the festival willingly undertake hardships as proof of their devotion.  This may mean the traditional practice of carrying one’s gift for the gods, usually upon the head, to the temple.  However, many choose to exhibit their faith in a more demanding and somewhat gruesome way.

Kavadi often take the form of body piercings, which can become extremely elaborate.  The simplest forms often involve a rod that extends through the tongue, preventing speech as its bearer proceeds to the temple.  The purpose of such piercings is to serve as a constant reminder of the gods, allowing for complete focus on devotion during the religious holiday.  For those seeking a greater challenge, complex structures of piercings are often created, with longer lances serving as symbols of the javelin given to Murugan according to Hindu tradition.  Even the lightest of burdens, however, demands a great deal from worshipers on Thaipusam; the journey to the temple often requires them to carry their kavadi for several kilometers. An even more difficult journey awaits practitioners in Malaysia, home to an ancient temple at the Batu Caves.  Hindus bearing kavadi trek up to fifteen kilometers before reaching the religious site, where almost three hundred steps stand between them and the entrance to the caves.  Practitioners carry massive pots of milk and other offerings, often supported by the piercings characteristic of Thaipusam, for hours before they are able to present them to be offered at the temple.  The holiday, during which its observers willingly endure pain and suffering, stands as a rare and unique example of devotion. 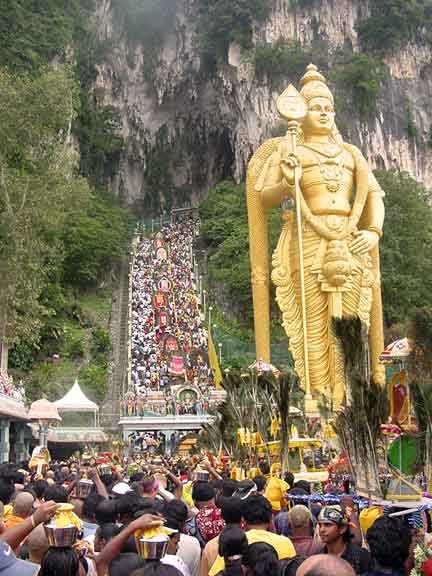 This entry was posted on Friday, March 28th, 2014 at 9:56 pm and is filed under Cultures and Customs. You can follow any comments to this entry through the RSS 2.0 feed. You can leave a comment, or trackback from your own site.