Advertising methods are constantly changing, trying to find the most effective way to persuade consumers in the least amount of time (viewers often only focus on an ad for a matter of seconds).  Most video commercials have been shortened from half of a minute to just fifteen seconds, and traditional ads (such as billboards and posters) have more competition and less interest, forcing advertisers to convey their messages concisely and effectively.

One of the most unique approaches in adapting to a decreased attention span was a series of one-second advertisements run during the 2009 Superbowl.  These short clips, ads for Miller High Life beer, were meant to catch viewers’ attention and show them the Miller brand in as little time as possible.  The ads were, by necessity, extremely simple.  They featured a Miller employee in front of cases of beer (with the Miller logo prominently displayed) who shouted a quick phrase before the ad ended, such as “Beer’s here!” or “High Life.”  The campaign allowed the company to save on airtime while still effectively marketing its product.

Recently, shock advertising has also increased in popularity.  Hoping to grab attention and generate interest, shock ads often push boundaries and frequently cross the line.  Some of the most effective campaigns utilizing this tactic have been run by Amnesty International, a group seeking to protect human rights across the globe.  They use startling images, apparent contradictions, and irony to convey powerful messages about issues regarding violence and injustice.  Likely the most persuasive of these campaigns for viewers was a series emphasizing ignorance as the greatest obstacle to change.  They feature an act of cruelty in the midst of a large crowd, every member of which has literally turned his or her back on the victim.  It is a striking representation of the power that lies with those in the crowd, and a very convincing argument that viewers must act. 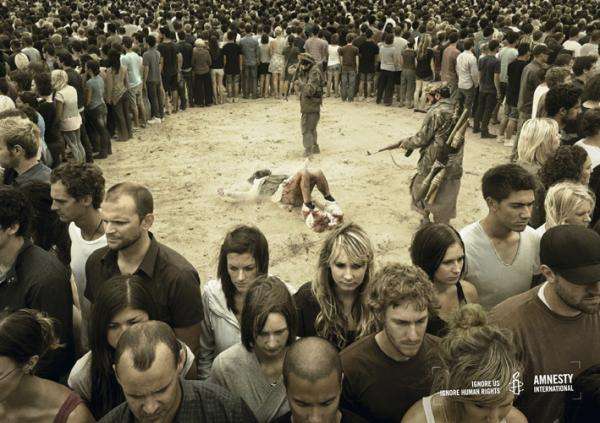