Although the Gregorian calendar was widely adopted as the international standard to avoid confusion and eliminate the need for conversion, many cultural festivities still coincide with traditional seasons and astrological signs.  This is especially common with New Year’s celebrations; although the majority of nations formally recognize the beginning of a calendar year on the first of January, many rituals recognizing the new year follow older customs and therefore correspond with other Gregorian dates.

Such is the case with Songkran, the nation-wide New Year’s celebration of Thailand.  Because Thailand did not officially recognize January 1 as the first of the year until 1940, traditional celebrations (originally based on the position of the sun) still take precedence.  Now celebrated between the thirteenth and fifteenth of April, the Songkran festival is a unique tradition particularly because of when it is held.

Mid-April falls at the hottest time of year in Southeast Asia.  Consequently, Songkran typically arrives at the end of Thailand’s dry season and marks the highest temperatures of the year.  As a result, the festival has essentially become a large-scale water fight, with complete strangers dousing one another in the streets.  Most residents, who are given time off from work, and visitors spend the holiday carrying a bucket or a water gun, seizing any opportunity to soak passersby.

While throwing water serves as a friendly, and cooling, gesture in modern celebrations of Songkran, its association with the celebration holds more traditional roots.  In preparation for the new year, it is customary to thoroughly clean one’s home and property.  Public temples and statues of Buddha are also cleaned during Songkran, and an early tradition involved catching water that had been used to clean these religious monuments, then gently pouring it over elders as a sign of respect and blessing.  Younger generations began taking liberties with this practice, until throwing water became the hallmark of Songkran.  Similarly, wet chalk used by monks to write temporary blessings at religious sites is now smeared over strangers in the streets.

Although traditional practices remain, today’s celebrations of Songkran are much better known for revelry than religion.  Temple-goers are far outnumbered by those flocking to the streets and bars.  Beauty and talent pageants have become more popular attractions than statues of Buddha.  Nevertheless, important aspects of Songkran have been preserved.  Many people take the holiday to return to their hometowns, reuniting with family and friends to celebrate the coming year.  Reverence for elders is still highly valued.  Water can still be seen as a sign of cleansing and purification.  And most importantly, the holiday promotes solidarity, bringing complete strangers together in celebration.

This unity extends beyond Thailand, as several other nations in Southeast Asia celebrate Songkran as well (although each has its own name for the holiday).  Water festivals take place in Laos, Cambodia, Myanmar, and parts of China and India.  Of course specific traditions and practices vary between nations, but the basic purpose and spirit of Songkran remain unchanged across borders.  Like any celebration of the new year, it is a time of jubilation and hope for the future.

With the arrival of each new year, people of almost every nationality around the globe make resolutions to improve their lives.  Amid the celebrations, there is a common desire to leave the troubles of the past year behind.  One region of Peru has combined the joyous celebration that typically precedes the new year with the concept of communal betterment.  In a unique tradition known as Takanakuy, a growing number of Peruvians in the Chumbivilcas area prepare for the arrival of the new year by settling old arguments with neighbors, friends, and family.  As part of the annual celebration, the name of which translates to “when the blood is boiling,” quarreling parties clear the air over any disputes with physical fights, often ending in a knockout.

While trying to make peace through violent brawls may seem like a counterproductive notion, the Peruvians who take part in Takanakuy would disagree.  The fights are not primarily about violence, and certainly not about vengeance; instead, they are an honorable way to settle disputes, putting a definite end to petty arguments and preventing them from escalating.  Furthermore, the spirit of Takanakuy, which takes place on Christmas Day, is far more about community and solidarity than conflict.

There are many non-violent components of Takanakuy, including traditional dress that celebrates regional history.  Ski masks are so common in the Peruvian provinces that are located in the Andes Mountains, including Chumbivilcas, that those belonging to each region have developed unique designs and color schemes designating their place of origin.  Masks in the Chumbivilcas style (red, green, yellow and white), an easily recognized sign of pride, are a frequent sight at Takanakuy.  Elaborate costumes emulate historical periods, with popular outfits fashioned after Andean horsemen and colonial slave drivers. 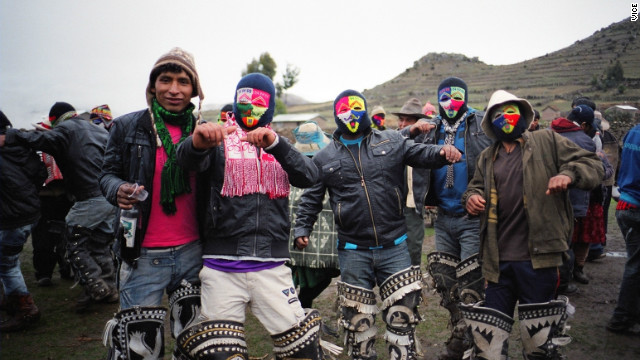 Music at Takanakuy also holds important ties to the past.  Although the tradition has spread to urban areas, Takanakuy belongs primarily to the indigenous people of the Chumbivilcas region, who live under their own law without government interference.  Their preferred style of music, known as Huaylia, originated in the sixteenth century as part of a revolutionary movement; its lyrics emphasize the common Chumbivilcas ideals of freedom and independence, a spirit reflected by Takanakuy itself.

The fights themselves, which draw hundreds of spectators to a small region of the Andes, are not entirely unstructured.  The crowds are called together and process to a designated area, where those wishing to settle an argument may challenge an opponent by calling out his or her full name.  During the match, several officials keep the spectators in line with whips while another observes the fight.  Most fights end in a knockout, but all, by requirement, end with a handshake or hug.

While violence is an unorthodox way of making peace, it has worked for generations of Takanakuy participants.  Shared tradition, pride, and honor serve to unify the natives of the Chumbivilcas province.  With such a strong focus on community, Takanakuy allows those involved to see past petty conflicts and focus on repairing relationships.  And if all else fails, the days of heavy drinking before and after Takanakuy are often enough to build camaraderie.