In the northern hemisphere they’re known as Aurora Borealis (dawn of the north), in the southern hemisphere they’re known as the Aurora Australis (dawn of the south), but to all, these magnificent phenomena are known as a natural light show which illuminates the entire night skyline. Some aboriginal tribes believed the lights to be the souls of their deceased ancestors, Alaskan natives believed they were spirits of the animals in which they hunted–whales, seals, deer, etc., early Native Americans of Wisconsin believed they were representations of hunter and fishermen gods, while other tribes in New Zealand believed it was a magnification of torches or fires. This intriguing blaze in the sky has baffled humans for centuries, as it appears to be a message from God. So, what are the northern and southern lights?

This natural light show is caused from the combustion of tiny gaseous particles in the earth’s atmosphere colliding with gaseous particles released from the sun’s atmosphere. These billions of microscopic collisions can illuminate an entire night sky with bright, vibrant colors of green, violet, orange, blue, or yellow. The sun’s surface is constantly exploding with millions of degree-Celsius gas particles that travel thousands of light years away from the sun on solar wind towards Earth. Yet, Earth’s natural magnetic field is able to protect the atmosphere and surface of the planet from these particles. But the magnetic field is weaker at both poles of the Earth resulting in gaseous particles colliding and exploding 50-400 miles above Earth’s surface, resulting in the beautiful lights.

The best place to see the lights are in unpolluted air in the upper northern hemisphere and lower southern hemisphere of the globe. Places like the Yukon peninsula in Canada, the Northwest territories of Alaska, the northern tip of Norway, the southern coasts of Iceland and Greenland, Antarctica, the southern Indian Ocean, and the northern coastal waters of Siberia. These naturally luminescent glows are a phenomenon everyone (including myself) must witness in their lifetime, as it is an inspiring and utterly humbling natural beauty that will leave you breathless to nature’s spectacle.

Situated in the northwest corner of Montana is one of the most pristine bodies of water in all of America. Flathead Lake is the largest natural freshwater lake west of the Mississippi River United States covering over 200 square-miles of Montana. This lake was created by the glaciers of the Ice Age, making it one of the clearest and cleanest lakes in all of the world. The lake has an average depth of 165 feet and a maximum depth of 371 feet and it is home to 25 different species of fish (10 of which are native to the lake). The Flathead region is also known for its incredible mountain range, worldly-known ski resorts to north, cherry orchards to both the west and east of the lake, a brewery to the south, and scenic flights and skydiving opportunities through Glacier National Park. 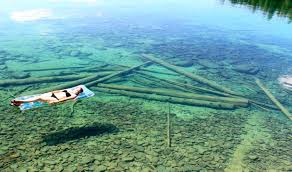 What makes this lake so intriguing is how clear and untainted the shoreline and waters are, especially at some extreme depths–a feature which should be more highly praised in the current United States. Because of the highly industrialized lifestyle of this country, it is rare that we can appreciate and preserve one of the last handful of natural beauties still left in this country. Because Montana has taken extreme action to reduce their greenhouse gas emission, their natural landscapes have become a priority among the state legislation. The rest of the states need to learn from Montana’s  ‘clean’ lifestyle. By reducing the emissions of harmful greenhouse gases, we can better preserve the natural beauties of this world through cleaner (and safer) industrial habits. The United States is the global leader in CO2 emission and other harmful greenhouse gases like methane and nitrogenous compounds, ever since the rise of the Industrial Revolution. Until we can find a constant source of clean energy, our landscapes, wildlife preserves, and other natural phenomena will slowly suffer. Flathead Lake is proof that there are still natural wonders left in this country that have yet to be corrupted by Global Warming effects of harmful industrialization.