Olympic weightlifting in its modern form only came to be in 1972, but the sport has long history dating back to the first modern Olympics held in 1896. The competition held in the 1896 games is a far cry from a standard weightlifting meet today; that competition featured none of the equipment that modern weightlifters are familiar – instead athletes competed in one and two-handed lifts featuring dumbbells and fixed barbells. It wasn’t until the 1928 Olympic games that a standardized format was created for weightlifting – the 1928 games included the snatch and the clean & jerk (the two competition lifts used today) as well as a third lift, the clean & press. The clean & press was similar to the clean & jerk, except to raise the bar from the shoulders to a locked out position overhead, the athlete was not allowed to utilize leg strength in the press. To ensure this, athletes’ feet had to remain planted on the ground during the press. Here, Belgian Serge Redding cleans and presses an impressive 228kg (502lbs).

In 1972, Olympic weightlifting underwent a major change as the clean and press was removed from competition due to difficulties in judging. The press was originally intended to be a test of upper body strength, performed while remaining relatively upright. However, athletes began using techniques that allowed them to better utilize their core muscles in addition to their upper body which enabled them to lift more weight. Contest organizers that this was against the original spirit of the lift, and removed the clean and press completely.

The removal of the clean and press also prompted a change in weight classes – the lightest weight classes became grouped together more and the heavier weight classes were more spread out. Thus started what is often called the “Golden Age” of Olympic weightlifting, a period where incredible performances were put up at nearly every Olympic games and World Championship. There are some records from this time period which still have not been surpassed by modern lifters, mostly due to the incredibly lenient drug testing protocols of the time.

It was during the period from 1973 to 1992 (when the weight classes were changed once again) that many of “the greats” of weightlifting rose to fame. Among them were Naim Süleymanoğlu (considered the greatest lifter of all time and often called the “Pocket Hercules” due to his height of only 4′ 10″), Yurik Vardanyan (whose 405kg total at 82.5kg remains unsurpassed by heavier athletes today), and Leonid Taranenko (who holds the title of heaviest clean and jerk in competition ever at a staggering 266kg). 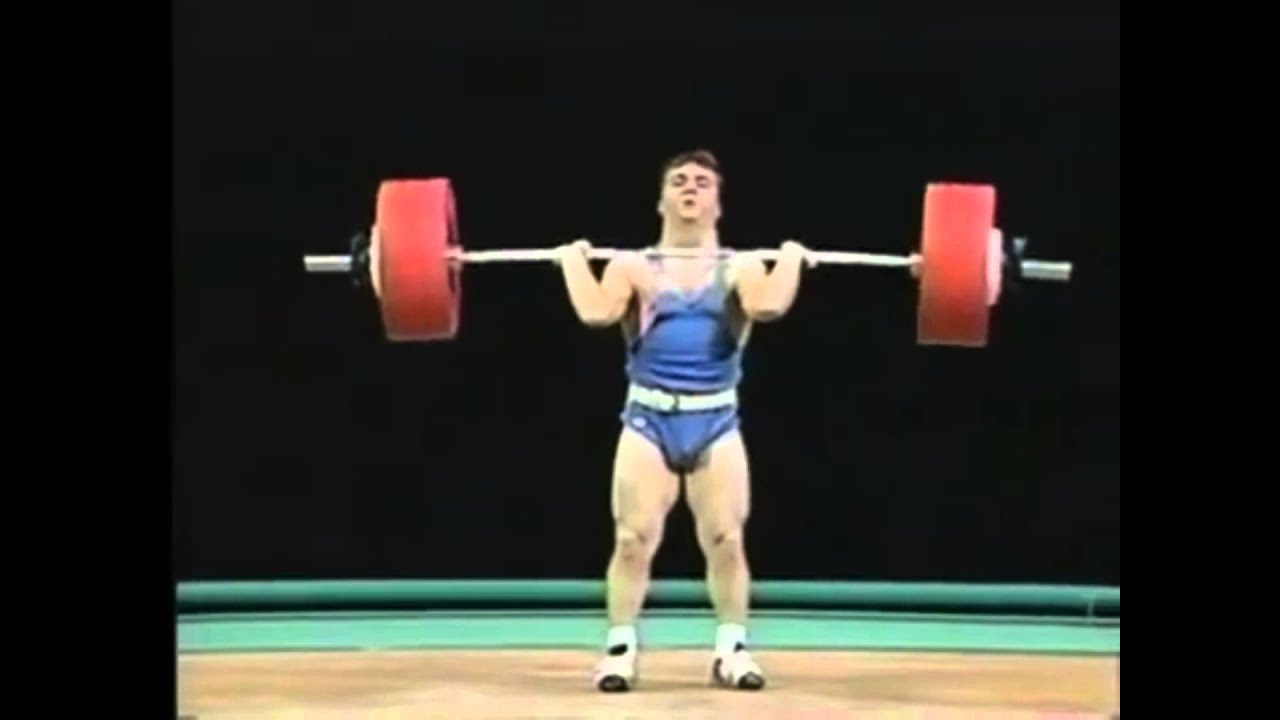 Unfortunately (or fortunately, depending on your position on PEDs), the IWF decided to change the weight classes again in 1993 due to rampant steroid use among lifters. This shift in classes would essentially wipe out all existing world records, starting off athletes on a clean slate. Combined with this, the IWF also introduced more stringent drug testing measures designed to ensure that the competition was as fair as possible between each lifter. Despite the more stringent tests, this period produced its fair share of weightlifting greats as well including Pyrros Dimas (one of only three weightlifters to win 4 Olympic medals, 3 of them gold) and Halil Mutlu (who until fairly recently held one of the oldest weightlifting records). Naim Süleymanoğlu also continued to dominate during this time period, setting a total world record in the process).

Pyrros Dimas, one of three lifters to ever win four Olympic medals (three of his were gold)

In 1998, the International Olympic Committee (IOC) finally decided to allow women to compete in weightlifting but set a maximum of 15 weight classes to be shared between male and female athletes. Prior to 1998, men had 10 weight classes all to themselves so more restructuring was in order to make things a bit fairer for the ladies. The IWF eventually decided to have 8 men’s classes and 7 women’s classes, once again wiping the record books clean and establishing the weight classes that are still in use today.

In the 2000 Olympic games in Sydney, women competed in weightlifting for the first time. Of particular interest in China’s performance; the Chinese government saw this new opportunity as another way to showcase international dominance. China sent 4 female lifters to Sydney; all four won gold in their respective weight classes. Sydney was also the last time an American (male or female) medalled in an Olympic games (Tara Nott won gold in the 48kg class and Cheryl Hayworth won bronze in the +75kg class) until 2016, when Sarah Robles took bronze in the +75kg class.

Tara Nott, the last American to win a gold medal in weightlifting

From its infancy with outmoded equipment to its place in the Olympics as a modern, high tech sport, weightlifting has evolved (and continues to evolve) to keep up with the times. Just this year, the IWF announced a new women’s weight class, finally increasing the female classes to match in number with the male classes at 8 each. I (along with weightlifting fans everywhere) am incredibly excited to see what the future holds for this sport.