One of the oldest accidental discoveries on record occurred in a kitchen in China, approximately 2,000 years ago. A cook mixed charcoal, saltpeter (Potassium Nitrile), and sulfur over a hot fire, after which it easily combusted. If this mixture was placed inside a bamboo case, pressure built up inside the casing and the mixture exploded. This shockingly flammable discovery lead to the invention of a common explosive in our modern society: the firework. The Chinese called the chemical mixture placed inside the bamboo “Fire Chemical,” and soon were using this basic fire cracker as a part of commonplace festivities—religious rituals, wedding celebrations, funerals. The loud bang emitted from the cracker was believed to ward away harmful spirits from festivals. 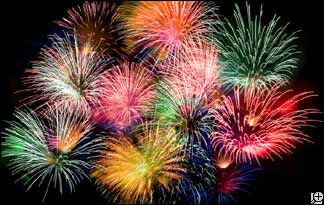 This basic chemical mixture said to have been accidentally discovered in the kitchen of a Chinese chef lead to what we now know as a firework. After this initial discovery, historians believe that Marco Polo transported the basic firework from China to areas in the Middle East, from whence it was brought to England. The English interest in fireworks was mainly for its explosive properties, and its potential to be used in chemical warfare. They developed the ration of saltpeter, charcoal, and sulfur that is still used in fireworks today. Yet, it was not until this discovery was brought to the Italians that the art form of fireworks was truly developed. In Italy, different colors and strategies for creating fireworks were developed. Yet all of this was due to the accidental discovery of the explosive properties of this mixture by a Chinese chef.

We have the Chinese to thank for our New Year’s and Fourth of July celebrations, without which we would have no colorful displays of fireworks to celebrate our holidays. While this accidental discovery is not life changing, it does majorly affect our societal traditions.