Social networking outlets such as Twitter, Facebook, Instagram and YouTube have played a crucial role in recent protests across the world. These sites have been used to promote protests and exploit “corrupted” governmental regimes all while sparking revolutions within a given country. Probably the most recent and memorable of these revolutions was the Tunisian revolution, which spread into other parts of the middle east and north Africa, eventually carrying the name “Arab spring”. The Arab spring was the revolutions, coups, and protests that took place in Tunisia, Libya, Egypt, Yemen, Syria, and Iraq. However, it’s important to understand that social media played a huge role in rallying the people to generate successful protests. Since we discussed in detail during class about the Tunisian revolution, I thought it would be important to discuss another memorable revolution, the Libyan civil war.

Although it was about five or six years ago I remember it like it was just yesterday. My parents called me into the living room to witness all the major news outlets reporting the death of 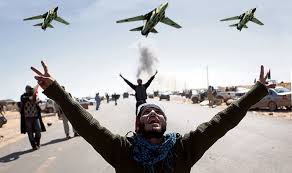 Muammar Gadhafi. At the time, I was not entirely sure of who he was and why he had died, but I realized the importance of what had happened. Now, what exactly allowed something of this magnitude to happen? A powerful dictator and his faithful army had been overthrown by common civilians. One would think in today’s modern
times it would take a large amount of people to carry out such a feat and it did, but how were these revolters able to gather such a large amount of people? The answer, social networking. By 2011 social media sites such as twitter and Facebook had already been around for at least five years, but were growing in popularity by the minute. Media played a crucial role in the Libyan civil war on the account of both sides of the issue. In the beginning of the war anti Gadhafi propaganda was being portrayed across local news stations. Gadhafi was playing round-the-clock patriotic music on a Libyan owned television station. The rebel’s response to this was the display of angry citizens protesting one of Gadhafi’s live speeches. With the connection that the internet and social media provides, it was only a matter of time before it got in on the antics. According to multiple websites, social media played a vital part in organizing protests as well as using anti-Gadhafi propaganda to increase the tension between the rebels and Gadhafi’s regime. Justin Bomberowitz lays out a timeline of the Libyan civil war through the use of social media, to gather protestors, micro-blog, live blog, and post powerful YouTube videos.

During the Libyan civil war, Facebook had a big role in hosting protest news pages. Essentially these sites would update information about a potential next protest or post emotional thought provoking propaganda. However, Twitter users used their accounts to micro-blog. Essentially, they would inform others of the live situation of certain protests. Because protests often turn violent, this was important to many people who felt strong about the cause, but not strong enough to put their lives in danger. The great thing about the use of social media during these revolutions is their low cost, portability, and real-time connection to millions of people. If you already own some mobile device or computer than social media is generally free to participate in. This makes access and the ability to influence more people much easier. Portability is another major factor in social media. Now that our society is controlled by mobile devices, you can receive updates on the news that you want. For example, if you followed a certain Libyan protest account on Twitter, you could turn on their notifications. Turning on notifications allows the user to be notified every time that account posts a new tweet. Thus, thousands of people can be informed and influenced in just seconds. That is where portability and real-time connection play hand in hand. The seconds a post takes to reach a user can affect the size, strength and aggressiveness of a mass protest in minutes. There was even a social media site created for the transition of power after Gadhafi was overthrown and eventually killed.

The bottom line is that although social media should never replace your main source for consuming news, it is certainly helpful at informing an incredible amount of people in just mere seconds. Thus, we have seen the impact this kind of technology/propaganda strategy has on revolutions and protests that we have seen in the last 7-10 years.