“Great things in business are never done by one person; they are done by a team of people.”
— Steve Jobs

Working with diverse groups can present challenges for many organizations. Cultural differences play an integral role in peer to peer and leader-follower relationships.  Many companies operate on a global scale which requires them to be cognizant of these differences.  Major corporations are witnessing an increase in a diverse workforce.  Furthermore, as globalization increases, multicultural situations and interactions will also increase (PSY 533, 2018).  My previous employer was no different.  The procurement of onshore and offshore contractors/partners from India to assist with a process enhancement presented challenges for one leader in particular in the organization.  Much of our current reporting and processes were also going to be transitioned to our contractors/partners overseas as well.

Concerns arose when a one of the current supervisors was asked to work collaboratively on a major project with a team of overseas contractors.  Our current reporting processes were retained in house and updated and monitored by this supervisor.  Given our current growth and the need for more robust reporting capabilities, the supervisor would need to work collaboratively with the team from overseas.  The team was given a short deadline, as the need to rollout the changes in a timely fashion was imperative.  This required training on the current process along with development of potential enhancements to the current tool.  The leader would need to train the team on the end to end process of his user developed application and in essence work in conjunction with the team to expedite the updates.  The current tool fit the needs of the existing environment and the supervisor received several accolades for the initial creation and overall efforts.  He had a difficult time acclimating to a team setting.  That being said, working with the team presented several unforeseen challenges. The supervisor was concerned because he was typically left alone and given the autonomy to run this process.  Apprehensions arose, given the employee/supervisor had rarely worked in a team setting, as he valued working autonomously for the past few years.  As soon as he was immersed in a team setting, he reluctantly shared information with the contractors.  At times the contractors felt unwelcomed in team meetings.  The supervisor did not see much value in the team setting and failed to attend several meetings.  A couple of concerns were noted.  First, he did not want to relinquish control. The supervisor was also unaware of how to engage the contractors.  As we have witnessed, leaders must be aware of cultural differences when working with diverse multicultural teams.

Culture is the shared values of a group of people that make that group different from another group (PSY 533, 2018).  Hofstede describes cultural dimensions (rated on a continuum) that distinguish cultures from one another (PSY 533, 2018).  One of the dimensions used to distinguish cultures is individualism/collectivism. Individualism/collectivism describes the tendency of a culture to value the individual’s efforts (or the group’s efforts).  This dimension is often reflected by who is rewarded, “the hero” or “the team” (PSY 533, 2018).  India exhibits high scores on in-group collectivism (Northouse, 2015).  Personal relationships are valued. India is predominantly a collectivist society; Interpersonal relationships and social-familial structures form the heart of Indian culture (“Doing Business,” 2015).  The behaviors of the supervisor were impeding progress and deadlines were initially missed.  In addition if there were any quick wins or small advancements, the leader would look to take immediate and full credit for the accomplishments.  There were some immediate concerns with the ethical climate at the onset.  Victor and Cullen’s definition of the ethical climate of an organization include the ethical criteria the one uses in decision making such as egoism or doing for oneself, benevolence or doing what is good overall, and adhering to principles or standards (PSY 533, 2018).  There is also the perspective for judgement or locus.  Individual locus describes looking after oneself while local and cosmopolitan indicate looking at those directly impacted or society in general (PSY 533, 2018).  During the initial phase of the team project it was somewhat apparent that the leader was operating in a climate in which self-interest was prevalent.  He is unwilling to share credit for any progress.  Egoism can also be used to describe the behavior as he is only thinking of himself. 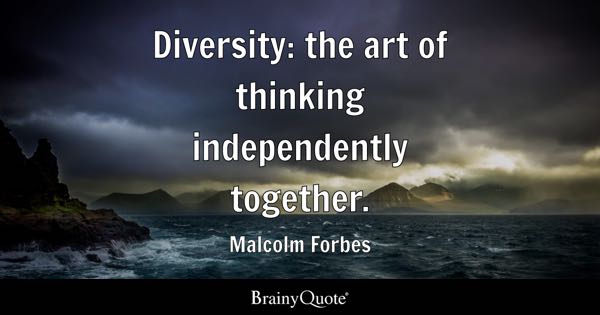 A team is as strong as its collective mindset.

This behavior could only last so long as upper management was growing weary that the deliverable of the new process would not be met.  The leader realized how his behavior was adversely impacting progress. Morale was down, and the team was disengaged in meetings.  The leader sought advice from a colleague in another department who had experience working with diverse groups.  He subsequently came to the realization that his behavior needed to change.  The fate of the new process was at stake.  It was critical that the rollout met the deadline as the company felt this change will allow them to remain a key player in this competitive landscape.  He reassessed his approach when engaging the team and gradually began to facilitate an environment of inclusivity.  In collectivist cultures, importance is placed on the concept of “we” instead of “I”, with closely connected groups within that population working together.  Benefits for the group as a whole is the main focus, while benefits for the self stem from the group mentality (Hitchcock, n.d.).  He welcomed inputs from other members of the team, and worked diligently to ensure everyone’s ideas were considered.  Team synergy began to improve.  It was a delicate balance, and the leader worked to ensure everyones’ needs were met.  They valued authority, yet thrived in this team setting. A team is as strong as its collective mindset.  Collectivistic cultures reward collective success by bringing people together around a shared ambition and goals (Razzetti, 2018).  Accolades were shared by all, and the leader also facilitated quarterly social (voluntary) outings for our onshore partners.  Not only did they meet the deadline, they delivered the final product well in advance. The ethical climate is organic and in this case a shift was noted.  As we have witnessed it is important to recognize cultural differences in the workplace. The end result was an overall win for the leader, the team, and the organization as a whole.

Hitchcock, A. (n.d.). What are the Six Cultural Dimensions? Retrieved from
http://daily.unitedlanguagegroup.com/stories/editorials/six-cultural-dimensions

Razzetti, G. (2018, January 9). Why Your Team Is Not Working as a Team ? Stretch for Change [Web log post]. Retrieved from
https://blog.liberationist.org/why-your-team-is-not-working-as-a-team-9f4b4ebd2755