Hi all! I currently live in downtown Chicago and work as a full-time nanny and house manager for a professional family. I love to bike the city, walk by Lake Michigan, and embrace my inner 5 year-old on the daily.

I have been a nanny for six years, and have worked with four children from the time they were infants. The earliest infant I started with was a mere two months old. Though it seems as if they have a very limited understanding of, well, really anything- they can already “demonstrate a visual preference for faces” (ncbi.nlm.nih.gov). This is just the beginning stages of categorization in infants, particularly in the fusiform face area, responsible for responding specifically to faces (Goldstein 2011, pp. 260).

When I began with Ally* she was one week shy of three months. I also cared for another eight month old girl who was dropped off at Ally’s house. On the first day, I held Ally for the first time as her mother made her way back to work. She looked at me with wide eyes, and I could tell she was studying my face. Generally, at around two months of age, “more sophisticated categorization begins to appear” (Goldstein 2011, pp. 263). Based on repeated findings using the familiarization/novelty preference procedure, Ally was likely grouping my novel, or new, face into the category of “other women” as opposed to the category of “mother” (Goldstein 2011, pp. 263).

When the eight month old’s father, John*, came to pick her up from Ally’s house, he was interested in meeting Ally. I gently handed her to John. Ally studied his face like she studied mine, and suddenly began to whimper. “Infants are more proficient at categorizing and processing female than male faces” according to Cornell (1974), Leinbach & Fagot (1993), Younger & Fearing (1999) (infantlab.fiu.edu). Ally must have felt less comfortable after studying John’s face because she was not as easily able to categorize him.

According to the article presented on infantlab.edu, by Ramsey, Langlois and Marti, one would believe that in all cases it is primitive for an infant to have an “advantage in processing female faces.” Contrastingly, in a scholarly article which appears in the National Library of Medicine of the National Institutes of Heath, this claim is not supported. According to this article, the infantile ability to demonstrate categorization and processing of a certain gender’s faces is actually a result of who the infant is “raised primarily by” (ncbi.nlm.nih.gov). By these findings, the reason Ally was seemingly made uncomfortable by John’s face, but not mine, is likely because her mother had been her caregiver each day before I became her nanny at nearly three months of age. In addition to her ability to more easily categorize female faces, “infants raised primarily by a female caregiver demonstrate a preference for female faces over male faces” (ncbi.nlm.nih.gov). So, by these findings, Ally would also prefer to see female faces across the board than male faces.

Though there exist conflicting theories on how exactly infants develop preferences and a proficiency in discriminating one gender’s face over another, none of this would be possible without the ability for an infant’s fusiform face area to categorize faces. I think it is amazing how quickly the human mind adapts and learns to the present environment. 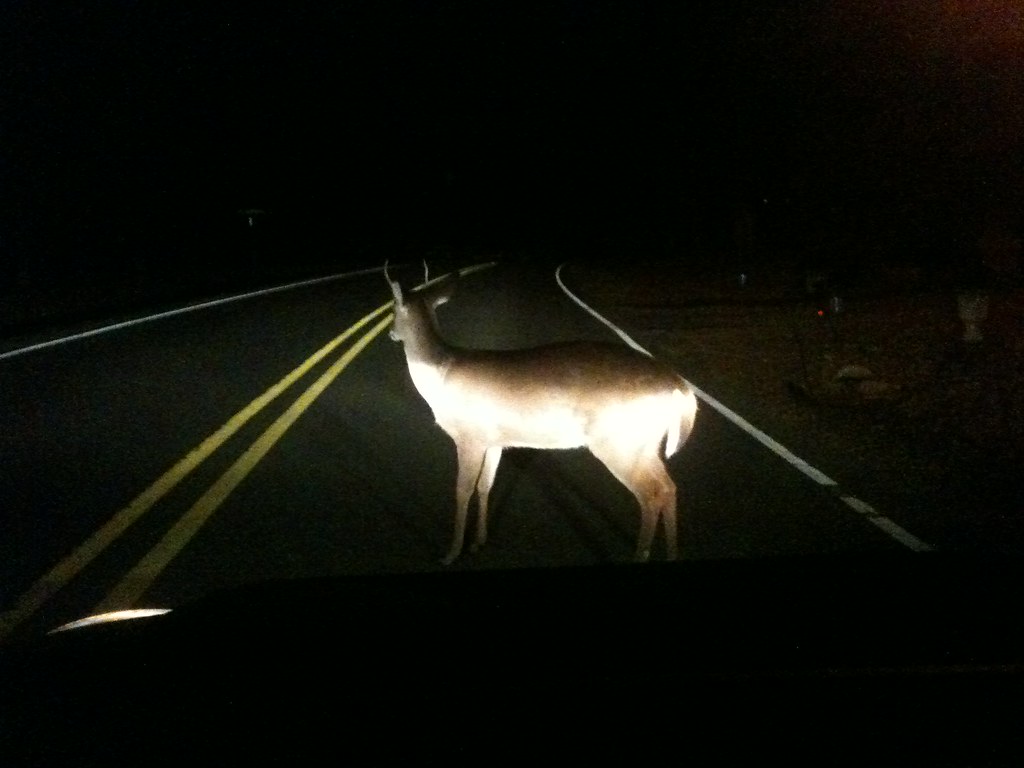 Around three o’clock in the morning, I was sleeping in the passenger seat of my boyfriend’s car after a long day of driving. We were on the home-stretch through the forest preserve only a half of a mile away from his parent’s house where we were going to stay. My boyfriend came over a blind hill, only to find a large buck standing in the middle of the unlit road. He slammed on his breaks and swerved to the left, causing my head to slam into the car door with immense force. I was sleeping before this happened, so I was never aware of a deer in the road to begin with, but due to the moderate-to-severe concussion I suffered, I do not recall the events for the hour following the concussion either.

I do not remember waking up from an unconscious state, crying inconsolably the way a child would. I do not remember my boyfriend trying to calm me down before we pulled up to his parent’s house. I do not remember my boyfriend trying to help me walk into the house because my coordination was impaired, becoming physically ill, or his dad (luckily a medical doctor) waking up to evaluate my situation. I do, however, remember everything leading up to falling asleep in the car. This temporary loss of memory is generally called anterograde amnesia, which refers to the inability to “assimilate or retain new knowledge” (Goldstein, 2011, pp. 149). When dealing with a concussion, or other traumatic brain injury, it is more specifically referred to as anterograde post-traumatic amnesia (National Institution of Neurological Disorders and Stroke, 2015). Part of the reason it is common to lose memory of the concussion and what immediately followed, is due to the fragility of new memories (Goldstein, pp. 193). The newer the memory is, the less time it has had to consolidate (become more permanent), and therefore relies more heavily on the hippocampus for retrieval (Goldstein, 194).

A few days later, my boyfriend was driving me from downtown Chicago to the suburbs where both of our parents live. Originally, we planned to visit both of our families, starting with his and ending with mine. On the ride, I decided just to visit my own parents, and asked if he could drop me off on the way to his, since I was still feeling fairly fatigued from my concussion. We continued down the Eisenhower Expressway for about ten minutes, and he took the exit for Roosevelt Road towards my parent’s house. Confused, I quickly responded “Wait! Why are you taking this exit? This is not the way to your Mom’s house.” I had completely forgotten that I had asked to be dropped off at my family’s house. My short-term memory had also been affected.

When I hit my head, my frontal lobe was the part of my brain that endured the trauma. Usually trauma to the prefrontal cortex affects the ability to control attention through the central executive, which controls and coordinates which information is processed through the phonological loop or the visuospatial sketch pad on its way to long term memory (Goldstein, 2013, pp. 136). We had agreed to visit his family first and discussed it a few times before I decided differently in the car. When I was surprised by the change of route, it was an effect of preservation (Goldstein, pp. 136). Had I been in control of the car, we would have followed the old plans and I would have driven to the undesired destination. Essentially, the concussion inhibited my prefrontal cortex’s ability to briefly hold information.

“But as everything else about perception, this ease and apparent simplicity are achieved with the aid of complex underlying mechanisms.”

I was planning on writing a blog entry about the interaction between perceiving and taking action regarding writing this very blog post. I sat brainstorming about how many trade-offs between action-pathways and perception-pathways I would encounter. I considered delving deeper into the process and including information about feature detectors and the electrical signals that traveled through my retina. I became distracted by my hunger so I procured a snack, came back to my laptop, and reread through the “Welcome to Penn State’s Cognitive Psychology Blog” post to get back on track. I have a personal blog outside of class, so when I saw that adding graphics was permitted, I loved the idea. It is a bit of a lengthy process to explain how this happened, but here it goes.

Light reflects off of my cell phone, and focuses an image of my cell phone onto my retina where specific neurons fire (Goldstein, 2011, p. 38, 39). The precise neural code this creates is carried through my optic nerve into the primary visual receiving area of my brain, also known as the occipital lobe. I can finally perceive a representation of my phone. (Goldstein, p. 30, 38, 39). From there, this representation of my phone departs to my temporal lobe which is responsible for identifying my cell phone as such through what is called the “what” or “perception” pathway (Goldstein, p. 72, 74). Additionally it is transmitted to my parietal lobe through what is called the “where” or “action” pathway which allows me to locate the exact place my cell phone was sitting in relation to the twenty-something other objects around me (Goldstein, p. 72, 74). With all of this information sorted out, I can reach for my cell phone.

As I pull my arm back to grasp my cell phone, my “perception” pathway is again at work sending my temporal lobe information about the dimensions, estimated weight, and other perceptual details of my phone. This allows me to pick up my phone with my left hand without whipping it across the room, thank goodness, as my “action” pathway shares neural information with my parietal lobe. My brain perceives a representation of the round home button on the lower end of my cell phone through the “perception” pathway, and receives information about its location through the “action” pathway so I can press it down to illuminate the screen on my cell phone. That, of course, could not successfully happen without first perceiving how delicate the glass button mechanism on my phone is so I do not shatter it and endure glass shards in my thumb.

I am sorry everyone. I was sure I would be able to explain this in time! I wanted to share how the coordination between the areas of my brain responsible for perceiving and taking action enabled me to take the picture for the featured image of my blog post. It is hard to believe I was only able to describe the process up to illuminating the screen on my phone. I did not even get to selecting and pressing the camera icon, looking at my keyboard to position my hand, looking through my phone at the image to select the perfect angle, or pressing the circle to capture the photo itself. I am guessing that would require a lot more writing space, so maybe another time. Really though, I am feeling a little “mind-blown” that this happens every time I take a selfie…