The long awaited second studio album from rock favorite Imagine Dragons finally dropped on February 17. It wasn’t done quietly either. With their emphatic single “I Bet My Life”, Imagine Dragons led listeners into a new era of their music with Smoke + Mirrors.

The band is made up of four members. Dan Reynolds (Vocals) writes the songs with the help of his band members, Ben McKee (Bass), Daniel Wayne Sermon (Guitar) and Daniel Platzman (Drums).

While keeping true to who they are, Imagine Dragons took some favorable leaps and experimented with their much admired edgy Rock/Alternative genre. Each song is its own extensive exploration of styles and sounds, using instruments from around the world, but never forgetting to include their electrifying beats and rhythms. You can listen to this album multiple times and still continue to hear something new each time. 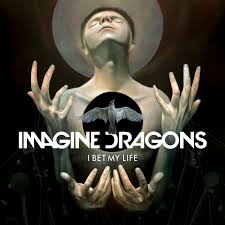 The single “I Bet My Life” is the biggest and boldest song they have released to date. With its enormous chorus, the song is not easily missed. Not to mention the song is superbly catchy and you will find it unable to control yourself from jamming along in your car. Reynolds voice is uniquely displayed in front of a gospel choir, showing us that his voice can be a work of art in any situation. Keep doing what you’re doing Dan.

“Gold” a second single from the album, pumps up the bass but in that oh-so-interesting Imagine Dragons way. The song took some experimental leaps, and goes from a compelling percussion entrance, to a haunting story. “Everything, Everything, Everything you touch turns to Gold” drives you through the chorus quickly changing the pace of the track. The compelling percussion layer can be heard throughout the song under the eerie voices of Reynolds and the band, and yes, it works, and in my opinion is the best track on the album.

The up and downs of the album let the listener view an exuberant amounts of ideas that the band wants to portray. “Polaroid”, one of my favorites on the album, is a nice pace change from the boisterous sounds of “I Bet My Life” and “Gold”. Reynolds sings an intro before introducing one of Imagine Dragons fortes; using clapping as a basis for their beat and rhythms (Flashback to “It’s Time” from Night Visions). The song is a wonderful display that the band can do much more than big and loud sounds with guitar solos. Reynolds along with the other band members use their beloved drums and take a step back and create a simple and clean track. With the addition of some electric sounds and percussion, the voices of all the band members are displayed creating a pleasantly calm mix of the bands voices. Something new for Imagine Dragons image, is their album design. Tim Cantor, a painter, designed all of the artwork on the album including a design for each song. The artwork varies from men with multiple arms, boney skulls, and flying clock pieces. Imagine Dragons then put out a video for their single “Shots” inspired by Cantor’s paintings and brought them to life. It all sounds extremely bizarre, but as usual, Imagine Dragons gives the artwork what it deserves. The video pulls together an interesting and beautiful display of Cantor’s work seamlessly with “Shots”. Once again, Imagine Dragons takes a leap and it pays off.

Imagine Dragons continues to make large strides in their music and show us that they continue to evolve while breaking down barriers with their unique pace and creative thoughts. They aren’t scared to take large leaps and experiment with their style and never cease to surprise their audiences.

The album work for each song can be seen on their website:

If you haven’t seen the music video for “Shots” you can see it here: