In my last blog post, I talked mostly all about my autistic cousin Charles, and his displays of “Savant Behavior.” However I also mentioned that I had two cousins that had autism, and that both displayed Savant Behavior. In case for those of you who had not read my last post don’t know, Savant Behavior is behavior or acts that display  “extraordinarily special abilities that cannot be duplicated by most other human beings.” Charles’ savant behavior was shown in his memory of dates, and remembering which day of the week that day fell on. My youngest cousin, Elizabeth who also has autism shows signs of Savant Behavior as well.

Elizabeth’s autism is far more severe than Charles’. She experienced a number of more traumatic effects of autism, including temper tantrums that would result in her repeatedly hitting herself, and bashing her self in the face her knees. This problem became so bad that Elizabeth was forced to wear a helmet at all times of the day.  She has difficulty speaking, and for a very long time my family and I never really thought she could speak coherently. She would sometimes be able to get some words out, but for the most part Elizabeth had extreme difficulty communicating. Until one day, Elizabeth was in Austin, Texas with my Uncle Chuck and Aunt Jenny, for a special autism program, HALO. The program was founded on the basis of an idea called “the rapid prompting method” which gave autistic children the ability to communicate through a letter-board.  Soma Mukhopadhya was the developer of the program, who was with Elizabeth in Austin to attempt the communicating method. After a few short questions, Elizabeth grabbed a firm understanding of the method and began to start talking about concepts and current events that her own parents did not think she was aware of. An example of these current events she discussed was the Iraq war, when asked how she knew about the situation, (keep in mind this was an autistic 3rd grade girl) she responded by saying she had watched the CNN news report in the airport on the way to Texas.

Once Elizabeth had returned home from Texas, she began to type more and more. She began to write poetry, and my aunt and uncle took notice at Elizabeth’s extremely high writing skills, and intellectual levels. My Aunt Jenny began to collect Elizabeth’s poems, and soon enough, my Aunt had a full collection of well written poems from Elizabeth, ranging in numerous different types of topics. My cousin’s story began to be noticed by people, and my aunt and Elizabeth began putting together a book. The book consisted of Elizabeth’s story, and featured some of her poetry. Amazingly, their book became published, and Elizabeth’s story spread to even more and more people. Elizabeth also had a CBN special on television about her book, and her remarkable story. You can watch the story here. 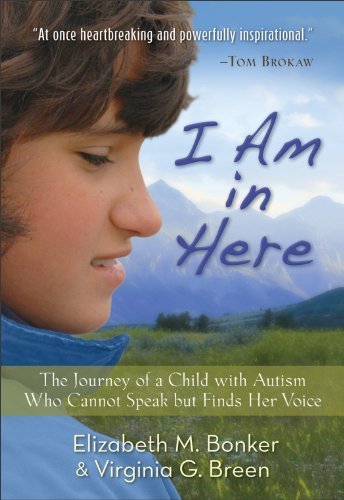 Elizabeth’s ability to write, while facing the challenges of autism is remarkable. It is a perfect display of “Savant Behavior”.  Although it is anecdotal evidence, I have further evidence to support my claim that Elizabeth has abilities that the normal person does not. Elizabeth took an IQ examination at the age of 7, and her IQ was calculated at 164. This examination is talked about in her book, on page 82 of “I’m in here.”  Elizabeth’s autism is very severe, however with this autism she unquestionably displays “Savant Behavior.” She is a truly remarkable person, and with out a doubt  a intellectual one as well.

I Am in Here: The Journey of a Child with Autism Who Cannot Speak but Finds Her Voice  Bonker, ELizabth, Breen, Jenny.