What are these mysterious sliding rocks you ask? Well just as the title implies, a phenomenon that was discovered in Death Valley National Park in California in which large boulders weighing up to 700 pounds move along an ancient lake bed without being touched by anyone or anything.

Although it varies for each boulder, trails that mark their journey across the lake bed are clearly left behind. It is hard not to notice these trails left behind that range from mere inches, to several thousands of feet in distance. On an area of land that is seemingly flat for miles, how is it possible for these immense rocks to just slide across without a someone physically forcing them to? Over a century’s worth of scientific investigations and research has been done and scientists have been left without answer… until now that is. 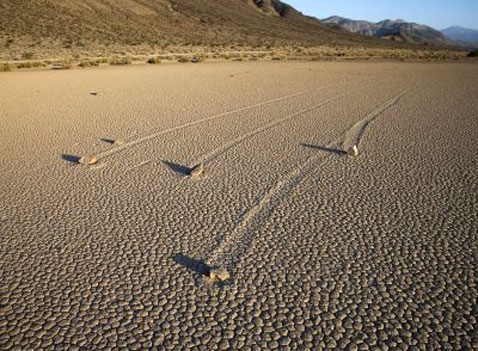 During late August, Scientists finally answered the long standing question. Death valley’s distinct shape allows water to be trapped after a large amount of rainfall strikes the area. This water engulfs the large boulders and erodes the land at their base. The movement occurs when the water around the stones freezes and forms sheets of ice. After the water is frozen, the ice begins chipping away and slamming into other large sheets of ice. The slamming of solid blocks of ice into each other is what causes the movements. The rocks were reported to move slowly at a rate of 2-5 meters per minute. These rates were recored by placing artificial rocks of the same weight on the lakebed with an imbedded gps. The boulders were left for two years until the results were finally received.

So after decades of tireless research by many scientists we now know the answer to the mystery behind Death Valley’s sliding rocks. To learn more about the process that took place to find what was causing this phenomenon watch this video.

2 thoughts on “The Mystery Behind Death Valley’s Sliding Rocks”