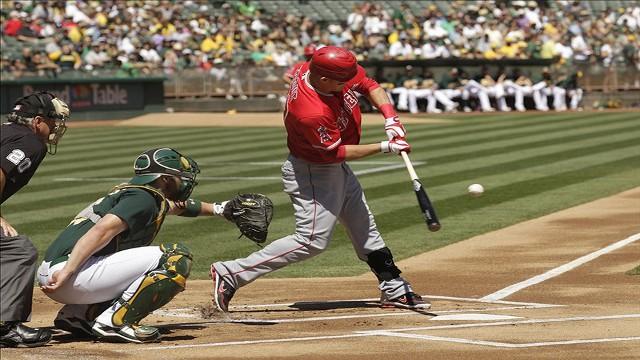 Everybody knows how hard it is to play the game of baseball. It is so hard that the great Boston Red Sox outfielder Ted Williams once said “Baseball is the only field of endeavor where a man can succeed three times out of ten and be considered a good performer.” Once in a while, we are given the privilege to watch wonderful athletes on the diamond; generational players like Babe Ruth, Hank Aaron, Derek Jeter, and Mike Trout continue to amaze us with their performances on the field. Just like every other sport, they are professionals for a reason: not everyone can do what they do.

Without even getting into the science of hitting a baseball, it just looks hard. A whistling ninety five mile per hour fastball is zooming just sixty feet six inches away from you, or a diving breaking ball is dropping off the table from where it started to where it will end up on the opposite side of the plate. You are required to make a split-second decision without hesitation whether to swing or to let it pass for a ball. How do these incredible athletes do it? First, let’s take a look at exactly how long you have from the time you must see the ball, to making the decision to swing, and eventually swinging and making contact.

Wayne State University Professor of Biomedical Engineering and Lead Engineer for ESPN’s Sports Science series, Dr. Cynthia Bir, explains just how much time a batter has to hit the ball. In .1 second, the ball has traveled twelve feet as the batter locates the ball out from the pitcher’s hand. It takes another .07 of a second for the batter to recognize speed, movement, and trajectory. By now, the ball has traveled another ten feet, and it will require .017 of a second for the brain and body to work harmoniously when swinging. This leaves just .09 of a second for the batter to decide to swing or not. The slightest hesitation could be the difference between a home run and a swinging strike. This video gives a nice explanation of the aforementioned information.

This is, however, only one aspect of hitting a baseball. Another aspect is swinging with the right trajectory. Swinging with too steep of a downward trajectory will result in a ground ball. Swinging with too much of an uppercut will result in a pop-up. David Kagan, physics professor at California State University-Chico, plotted all 586 home runs during April 2009 of the MLB season. The plot shows trajectory versus exit velocity off the bat. Kagan found that the average home run was launched at an angle of 29 ± 5 degrees at a speed of 101 ± 4 miles per hour (Kagan). There is not much room for error when swinging with the appropriate trajectory for hitting a home run. In addition, the trajectory at which you must swing varies from pitch-to-pitch. Thus, finding the right path at which to swing is quite difficult since there is not one given trajectory for every pitch under the sun. This ESPN special, “Swing of Beauty”, shows this swing trajectory and the swing path of MLB players Michael Young, Curtis Granderson, Dustin Pedroia, and Chase Utley.

In short, the small window of time from when the pitcher releases the ball to when the hitter makes contact paired with swinging at the appropriate trajectory for the given pitch provides one of the most amazing feats in sports: hitting a baseball. Of course, every sport is difficult in its own rite, but hitting a baseball is in a league of its own. I chose to write about the difficulty of hitting a baseball because I know just how frustrating it is from my experiences of playing since I was four. Is there a more challenging feat in the sports world? Are there better ways to understand how hard it is to hit a baseball? Is every sport equally as hard as the rest?

2 thoughts on “How Hard is it to Hit a Baseball?”