According to Alzheimer.org Alzheimers disease is a common form of dementia and a type of dementia that, “causes problems with memory, thinking and behavior.” Symptoms usually worsen over time and eventually interfere with a person’s daily life. For me this disease hits home. My father’s mother passed away many years ago from Alzheimers disease and my grandfather just passed away from this same disease yesterday. It’s an awful disease and even more painful to watch the person you love slowly lose themselves without the ability to stop it. The most common early symptom of this disease is difficulty remembering newly learned information but are there other early symptoms we’re missing?

A study conducted by The Johns Hopkins Bloomberg School of Health which was published in journal, JAMA Neurology discovered “reduced sleep and poor sleep quality may be linked to increased build-up of beta-amyloid plaques in the brains of older adults – a sign of Alzheimer’s disease. ” The research team conducted a study using 70 participants with a mean age of 76. All the participants were dementia free.

All participants were instructed to record their sleep patterns including how long they slept, how often they woke up through the night, if they had trouble falling asleep, and if they woke up earlier than they had planned. Their beta-amyloid deposition was measured using various brain imaging techniques. At the end of the study participants recored no more than 5 hours of sleep to more than 7 hours of sleep. The research team discovered an increase in beta-amyloid in those who had a shorter overall sleep compared to those who had longer night sleeps.

These result was shocking to me and honestly scared me a little. I often having trouble falling asleep which results in me having a shorter night sleep. Not to mention that I wake up frequently through the night. Does that make me at risk for Alzheimers disease later on in life?

The research team reported that, “the number of times a person woke during the night was not linked to an increase in beta-amyloid build-up.” This was a huge relief to me and made me feel better knowing that waking up throughout the night doesn’t have an effect on anything. However, researchers explained that many people who suffer from this disease report insomnia like symptoms. Further research on this would greatly benefit society.

A study done by Medical News Today, explained that sleep helps detox the brain by flushing our waste products of neural activity. University of Rochester Medical Center and lead author, Dr. Maiken Nedergaard says, “This study shows that the brain has different functional states when asleep and when awake. In fact, the restorative nature of sleep appears to be the result of the active clearance of the by-products of neural activity that accumulate during wakefulness.”

However further studies need to be conducted in order to determine whether or not sleep slows or prevents Alzheimers disease.

While this study was very interesting, this study was observational meaning they can’t technically prove anything or that correlation means causation. While recording their sleep patterns helps gives researches an idea of how this could play a part in the increase of beta-amyloid build up, it doesn’t take in account other factors that could have played apart in the patterns being shown. Participants could have been sick during the trial, where or who they were sleeping with could have caused an effect, or they could have incorrectly recorded their results.

This study would have had better results if they had conducted in experiment with both dementia patients and regular, healthy patients. Participants could record their results and researches could compare the difference in sleep between both groups. Researches could get a better understanding of the impact and also compare the beta-amyloid buildup using the brain imaging techniques they used earlier in their study.  This in turn would help show if Alzheimers disease already has an overabundance of beta amyloid build compared to the healthy participants. While dementia patients may cause a response bias with possibly not remembering to record/record all their results completely I think it would better explain the sleep phenomenon on this highly increasing disease. 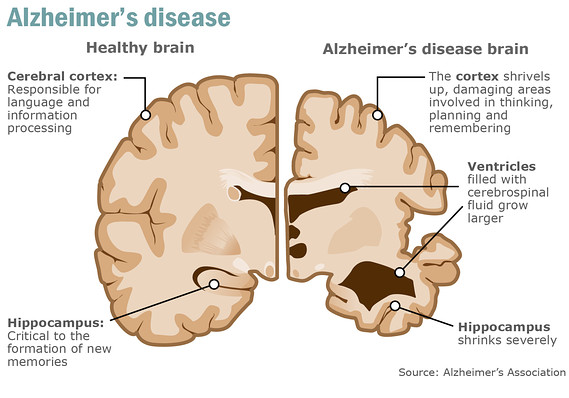 2 thoughts on “Does lack of sleep cause Alzheimers disease?”