People love and hate spicy food. Those who love it, regard food without chilli as tasteless; when those who hate it, choose to stay hungry rather than eating and crying in the same time. Today, I am going to talk about the effect to our body of eating spicy food. 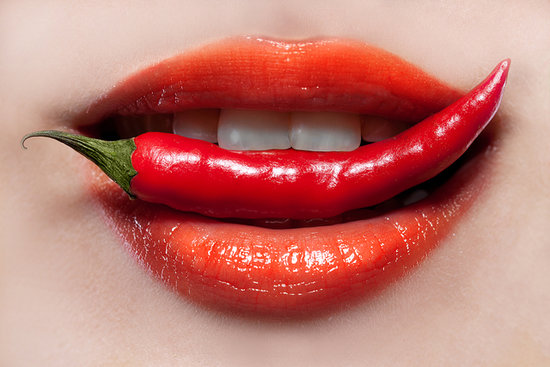 Long time ago people have noticed the question, Published in September 21st, 1983 on the New York Times, Jane Brody analyzed the effects of spicy seasonings on human body. Jane verified capsicum peppers’ effect of stimulating appetite, and pointed out capsicum peppers contain large amount of Vitamin C, Vitamin A, potassium and some iron and protein. She finally described spicy seasonings as “a tastebud- stimulating alternative to salt, the abuse of which can increase the risk of developing high blood pressure.”

However, the latest research performed by Jun lv and Lu qi, professors at Harvard School of Public Health, indicated that a daily habit of eating spicy food is actually good for our health. Their research was finally published in the British Medical Journal [Jun Lv et al, Consumption of spicy foods and total and cause specific mortality: population based cohort study]”

Scientific American summarizes the study perfectly, “ The researchers enrolled nearly half a million Chinese volunteers, aged 30 to 79. They quizzed them on their affinity for fiery foods, and followed each study subject for an average of seven years. During that time, more than 20,000 of the subjects died. But after controlling for factors like smoking history and income, the scientists found that the risk of death was 10 percent lower in those who ate spicy food a couple times a week, compared with those who abstained. And daily chili eaters, like Lu, had a 14 percent lower risk of dying. That figure held true for both men and women. And yes, while it is a relatively modest effect, Lu says to keep in mind: we’re just talking about chilies here. “It’s not medicine.” Now, let’s analyze the research. Obviously, we can rule out reverse causation easily. The number of participants is big enough, and they are random, so it is not possible that the difference happens by chance. The evidence is quite strong. But the researchers only give very weak “potential mechanisms”, which includes “the bioaccessibility and bioavailability of bioactive ingredients and nutrients of spicy foods”. Thus we cannot conclude there is a causation, and I strongly think that there is a third variable that influenced the result.

The research was done in my home country China, and I knew that Chinese doctors will always warn their patients not eating spicy food when they are sick. And in China, rather than antibiotic medicine, people are more likely to have Chinese medicine which a mixture of extractions from different kinds of plants. Because many ingredients of Chinese Medicine have a conflict with capsicum pepper.  (we say eating the medicine and pepper together breaks of the harmony of Qi in body). And for people who get sick really often, it may change his or her eating habit. More than that, it is not rare that when people stay up to work late, or experience a hangover, they will not eat spicy food. Therefore, I think it may be that people who do not eat spicy food originally have a low resistance to illness or have bad living styles, so people who do eat spicy food often are originally not as healthy as those who eat spicy food daily, which caused the difference of their longevity.

They study is interesting and shows strong correlation. However, researchers cannot explain the mechanism and there is potential third variable effect. In fact, different nations have different eating cultures, and the eating habits of people in different nations, races, ages change a lot. Deliberately change your eating habits may not benefit as expected. The funny fact is that many friends tell me that they will rather die than eating spicy food every day, because they cannot stand the stimulation. But for people who are able to stand spicy seasonings, add more spicy food to your recipe will do nothing negative. Just try it, and it may help.

3 thoughts on “What does eating spicy food mean to our body?”