This past Tuesday, I checked myself into the infirmary after feeling pretty lousy over the weekend. I slept for 13 hours both Sunday and Monday night, had a very bad cough, sore throat, and major congestion, and knew that something was wrong. After getting some blood work done I found out that I had mononucleosis, or mono for shit, or even “the kissing disease”. I didn’t know much about mono, but knew that it wasn’t very good. So I decided to do a little research on it, and see what I had gotten myself into. 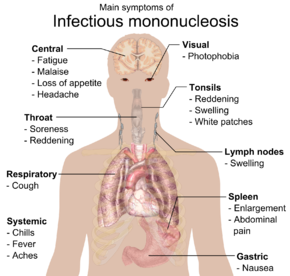 Mononucleosis is caused by a virus that can be transmitted through saliva, which is where the name “kissing disease” comes into play. But it can’t only be caught by kissing, as it can be transmitted through coughing, or sharing food and drink with another person. When you have mono, you might have symptoms such as fatigue, chills, loss of energy, and also loss of appetite, all of which are symptoms noticed early on. Some more intense symptoms include fever, severe soar throat, and also swollen lymph nodes. One of the most dangerous parts of mono is if your spleen becomes enlarged, it can rupture.

As you can tell, mono pretty much sucks. And after doing more research, I found out it could be worse… According to this report, it has been stated that mono can increase your chance for cancer.

The larger cells are from Hodgkin’s Lymphoma

This topic is something that I found to be very important to myself, and I hope important to all of you reading it. Mononucleosis is very common for our age group, and it is very common right now around the university. When I found out that I had mono, the doctor said I was the tenth person just in the past two weeks to be diagnosed with it. What you should take away from this is that if you are feeling any of the symptoms I currently stated before, go get checked out. You might not have anything wrong with you, but its better to make sure you are okay before you start spreading it to others in our community. So, if you do have mono, stay away from making out with people at parties, don’t share your Starbucks, and eat your own food, for your sake and everyone else’s!