About a month ago, I began reading this novel by Gary Mack titled, “Minds Gym”. The novel explains how your mind influences your athletic performance as much as your physical skills does, if not more so. I noticed that this concept can be applied to other types of performances and not just athletic. For example, I thought about how throughout high school/college many people are stressed out about homework, tests, projects, and different clubs/organizations, which sometimes results in very low test scores, unorganized events, and other negative consequences. Many times I thought to myself that they should not be as stressed as they are; but rather more relaxed. Although stress is common among most individuals, is it good for you?

Null hypothesis: Stress is not good for you.

Alternative hypothesis: Stress is good for you.

“Stress is the body’s way of responding to any type of demand or threat. When one feels threatened the nervous system responds by releasing stress hormones such as adrenaline and cortisol, which rouse the body for emergency action.” When one gets stressed blood pressure rises, breathing becomes more rapid, the digestive system slows down, heart rate rises, the immune system goes down, muscles become tense, and we do not sleep according to this article.

After some research I found that stress can have positive and negative effects. 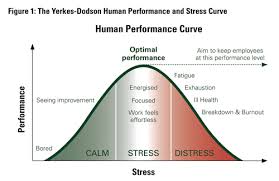 Above is the Yerkes-Dodson Law, it states that as stress levels rise, so does the performance levels to an extent. During the “calm” portion of the curve, people tend to be torpid and perform poorly. Then the stress portion is where people feel energized, motivated, and “in the zone”; optimal performance occurs during this point. In order to test this hypothesis, Yerkes and Dodson did an experiment on rats where they had them try to find the way out of a maze, if the rats took the wrong route they were given electric shocks. During the experiment, the researchers were looking for the optimum punishment, where rats learned the quickest. They found that as the voltage of the shock increased, so did the rats performance until it reached a voltage that was too high which leads to the third portion of the performance curve – “distress”. When the stress levels rose beyond a certain point, the rats began to under perform as they started to slow down, freeze, and retreat to avoid being struck by extreme voltages.

The Bottom Line in this study was: “When motivating people, find ways to increase their arousal level but only to the point where performance is maximized. Different people have different overload points so do be careful about this.”

Firdaus Dhabhar, an associate professor of psychiatry and behavioral sciences, and member of the Stanford Institute for Immunity, Transplantation and Infection claims that short-term-stress (fight or flight response) stimulates immune activity. This response is another benefit of stress. Dhabar concluded this after subjecting rats to mild stress, which in turn caused immense mobilization of several types of immune cells into the bloodstream, skin, and other tissues thus improving the immune system.

In addition, Dhabhar and his colleagues performed an experiment previous to the one above to figure out whether or not stress enhances recovery from surgery. They conducted the experiment by recruiting 57 patients who were scheduled for surgery to repair damaged cartilage in their knee joints. Three to ten days before the surgery, patients gave blood samples to establish a baseline count of  immune cells in their blood. Then again on the morning of their surgery before the administrating anesthesia, searching for an increase of immune cells in the bloodstream. Dhabar believed that patients should be somewhat stressed/anxious about half an hour before surgery thus activating the short-term immune response. Researchers found that three major types of immune cells: lymphocytes, monocytes, and neutrophils redistributed throughout the body. They then calculated the median redistribution. Patients above the median were labeled “high responders”, and those smaller than the median or unchanged were grouped as “low responders”. Researchers then followed up with the patients for one year, checking knee inflammation and used the Lysholm scale in order to rank knee function, pain, and mobility. Patients who elicited positive stress during surgery increased recovery as early as one week post-surgery. Low responders had scores around 80 and never recovered as much as the other group.

Also during this study, researchers found that women were less likely to show an adaptive response than men.  On average their lymphocyte redistribution numbers were almost four times lower than males’, and also had lower overall knee recovery.

Conclusion of the experiment: High levels of stress before surgery enhances the chances of recovery from surgery. Also that women are less likely than men to fully recover from surgery, therefor more research needs to be done to explain this conundrum.

Take Home Message From This Blog: Stress seems very likely to benefit people in various situations. Although stress can sometimes be beneficial, when levels of it are too high it can be detrimental to one’s performance and health.

3 thoughts on “Is Stress Good For You?”