In the exercise crazed culture we live in today, it would  be completely understandable to assume that the more miles jogged a week or hours spent at the gym correlates to one’s physical and mental wellbeing. The media constantly aims to convince us that absurd amounts of exercise will result in model-type bodies displayed on TV and in magazines. Take Kate Gosselin for example, who reported to Us Weekly she feels best when she runs 10 miles every other day.  I personally feel better about myself when I squeeze a daily run into my hectic schedule.

However, multiple studies have been conducted examining the adverse effects that distance running has on the body. Unfortunately, our society is brainwashed by the media and doesn’t understand that when it comes to vigorous exercise, more isn’t always better.  According to an editorial recently published in the British Journal Heart, people who work out too hard for too long may be less healthy than sedentary people and are more likely to die than moderate exercisers. The authors additionally examined decades worth of research regarding the effects of endurance athletics. Overall, the findings concluded that moderate exercise was good, but excessive exercising is damaging.  For example, in one particular German study, researchers compared the hearts of 108 chronic marathon runners and sedentary people. Shockingly, the runners had noticeably more plaque buildup, putting them at risk for heart disease. The following picture compares a normal, sedentary runner’s artery to a chronic runner’s artery. Plaque buildup in the arteries causes a decrease in blood circulation, and can eventually lead to several severe health problems. 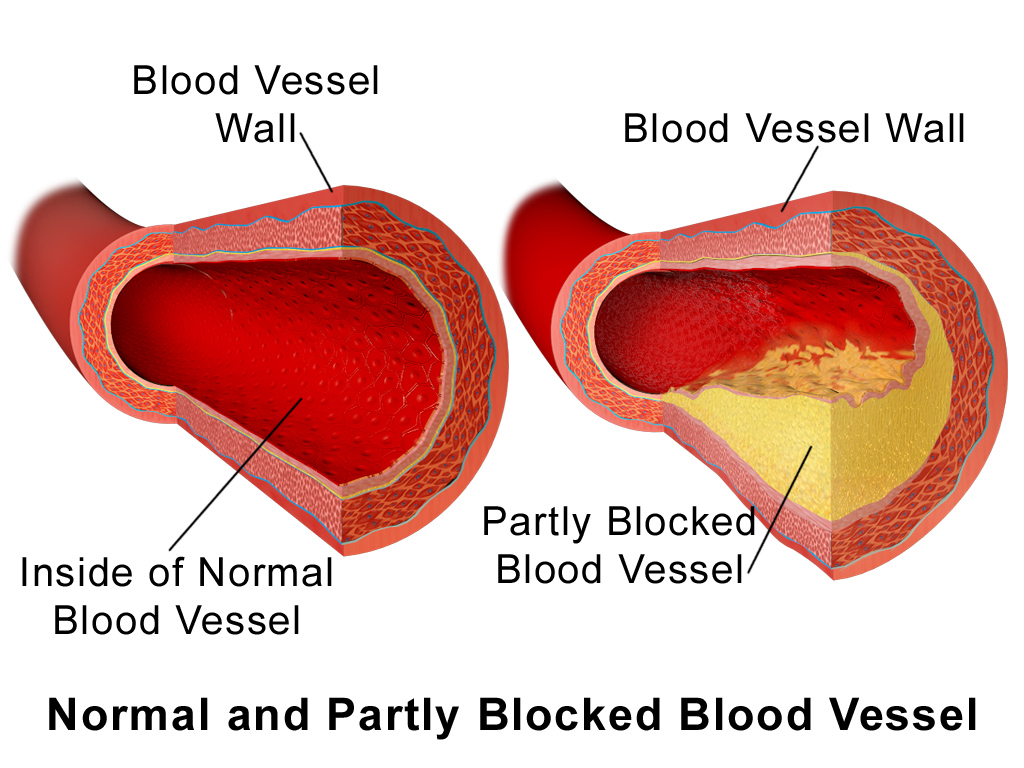 In another observational study, performed by scientists at Birmingham University, researchers tracked  52,000 people  (a combination of runners and non-runners) for 30 years. Runners reported a 19 percent lower death risk than those who did not exercise. However, the findings showed that too much endurance running has an adverse affect on one’s physical well being. The researchers concluded that running an average of 10-15 miles per week spread across three to four days results in the greatest health benefits. For example, those who followed the recommended guidelines risk of death dropped by 25 percent. There are endless negative side affects that excess running has on the body. During a strenuous workout, the  body works overtime to burn sugar and fat for fuel, creating a smoke substance in the body.  The “smoke” that travels through one’s  system binds with cholesterol to create plaque buildup in the arteries, and damages your cells through a process referred to as oxidative stress. James O’Keefe, Director of Preventative Cardiology at the Saint Luke’s Mid America Heart Institute of Kansas City claims, “Your body is designed to deal with oxidative stress that comes from exercise for the first hour, but prolonged intense exercise causes excessive oxidative stress, which basically burns through the antioxidants in your system and predisposes you to problems.”  However, researchers across the board agreed that these findings are not a reason to give up running forever. As O’Keefe additionally claimed, “Exercise is the most important component to a healthy lifestyle, but like any powerful drug you’ve got to get the dose right.” Exercise in moderation reduces  the risk of heart disease, high blood pressure, type 1 diabetes, Alzheimer’s, dementia, and premature aging.

In a  similar article with the catchy title,  “ Fast running is as deadly as sitting on the couch” scientists ran an experiment with similar findings. The study documented the exercise  habits of 1,098 runners. The findings showed that those who ran at speeds over 7 mph were nine times more likely to die prematurely within a twelve year span compared to those who ran around 5 mph ( a fast jog)  a few times a week. Statistics showed that vigorous runners were just  as likely to die as “couch potatoes” who never partake in physical activity. Peter Schnohr, a researcher from the Copenhagen City Heart Study quotes, “ There may be an upper limit for exercise dosing that is optimal for health benefits, and it is important to emphasize that the pace of jogging corresponds to very vigorous exercise”. Overall, the findings from the above studies are unmistakingly correlative: Running too fast/ too frequently causes alarming health problems, while running at moderate speeds and frequencies allows for optimum benefits widely associated with exercising.

Overall, when it comes to your running routine, finding a happy medium is key. You should probably think twice about becoming a crazed marathon runner, as it leads to brutal side effects that are detrimental to one’s health. If you happen to love running like myself, just remember that everything’s better in moderation.